Graphic warning: the video in this story has distressing images.

Mexico City: An autopsy of a Salvadoran woman who died in police custody confirmed that police broke her neck when they knelt on her back in broad daylight on a footpath in the resort town of Tulum.

Victoria Esperanza Salazar let out a scream Saturday afternoon as a female police officer knelt on her back to cuff her hands behind her. Salazar was face down on the street and barefoot. Her feet flailed. A couple people passed slowly by on a bicycle. There were food stands a few yards away.

Clips of video cobbled together give no sense of how much time elapsed. Then three other officers are seen standing around her motionless body still facedown, chatting casually. Later, three officers lift her still handcuffed body into the back of a police pickup truck and drive away. 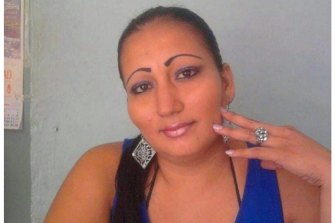 A supplied photo of Victoria Salazar, the El Salvadorean mother of two killed by police in Tulum on Sunday March 26.

On Monday, a small potted plant and a couple candles sat outside the convenience store where Salazar was killed. Someone wrote “Here they killed Victoria” in large purple letters on the pavement.

Salazar left Sonsonate, about an hour west of San Salvador, five years ago to look for better opportunities and escape the area’s street violence, said her mother Rosibel Emerita Arriaza. She was a single mother of two daughters.

She left her daughters with her family and made her way to Mexico. In the southern Mexico city of Tapachula, near the Guatemala border, Salazar requested and received refugee status.

Once she had legal status she moved to the beach resort town of Tulum on Mexico’s Caribbean coast. Salazar found work cleaning in hotels and brought her daughters, ages 16 and 15, to be with her.

On Monday, Arriaza was working with Salvadoran authorities on getting her daughter’s body repatriated. She also planned to travel to Mexico to be reunited with her grand-daughters. 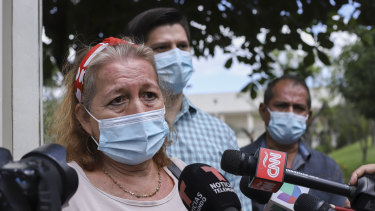 Rosibel Emerita Arriaza, the mother of Victoria Esperanza Salazar, talks to the press in Antiguo Cuzcatlan, El Salvador: “I want justice for my daughter”. Credit:AP

“I want justice for my daughter, because it isn’t fair what they did to her,” Arriaza said. “She was a woman who wasn’t armed, just for being a woman and I don’t know what happened.”

He called the video of the killing “shameful and conclusive”.

Tulum Mayor Victor Mas Tah said “I understand and share the outrage and pain of all of society”. He said the former police officers would be jailed in the coming hours. 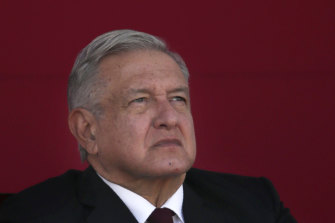 The scenes were reminiscent of the death of George Floyd in Minneapolis in 2020. Floyd was declared dead after a white police officer pressed his knee against the Black man’s neck for about nine minutes, holding his position even after Floyd went limp.

Floyd’s death was captured on widely seen bystander video and sparked sometimes violent protests in Minneapolis and beyond, leading to a nationwide reckoning on race. The trial for that officer has begun in Minneapolis.

Salazar’s death seemed likely to ignite tensions in Quintana Roo, where police used live ammunition to ward off a throng of about 100 demonstrators in Cancun in November.

The protesters were demonstrating against the killings of women and some smashed windows and burned documents outside the city hall, while others tried to tear down a plywood barrier at an entrance.

Police fired into the air, but people were injured when protesters rushed to escape as the shots rang out. The state’s governor condemned the use of force and the state police chief was forced out.