Paint shop ruined after elderly motorist careered through it

This is the shocking moment an elderly driver ploughs into a DIY shop, leaving a trail of devastation in its wake.

Clarke Decorate in County Armagh, Northern Ireland, was destroyed by the incident which happened on Sunday at around 4pm.

Fortunately the shop was closed at the time and the driver has since been released from hospital. 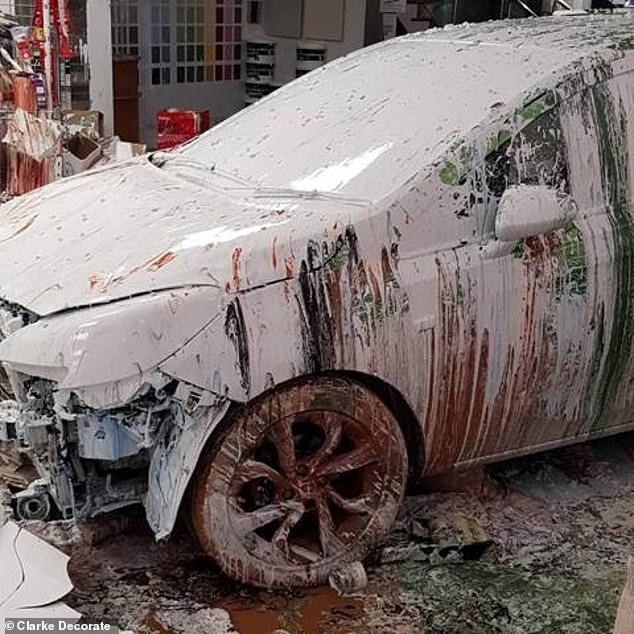 An elderly driver has ploughed into a DIY shop, leaving a trail of devastation in its wake and inadvertently giving the previously green car a new paint job (pictured)

CCTV footage shows the driver careering into the front of the shop at full speed, sending pots of paint flying.

It is believed the elderly driver may have become confused and was accelerating instead of braking.

He then went on to say the shop would be closed for a number of weeks while they carry out repairs. 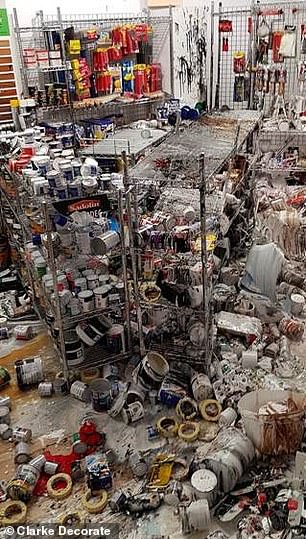 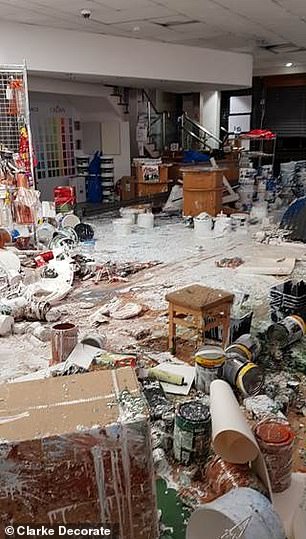 Clarke Decorate in County Armagh, Northern Ireland, was destroyed by the incident which happened on Sunday at around 4pm

He said on Monday: ‘The gentleman in the car had got out at the scene and he was taken to hospital to be checked and he was released last night.

‘Think he just got confused and was accelerating rather than breaking. Total mess and will take weeks to fix. But started now. Light at the end of the tunnel hopefully.

‘Don’t really know where to start or when we can. Walls, floors and ceiling are all ruined.’

Many products are destroyed or unusable and the owners have started the long and arduous clean-up.

The post continued: ‘Not nice seeing something you work hard at every day in bits like this, especially hard for my parents and grandmother.

‘But we have to remember it could have been so much worse if the shop had been open.

‘We will work extremely hard to get back open but in the meantime we are working on a temporary shop, details to follow.’