Palestine calls for UN probe into Israeli killings in Gaza 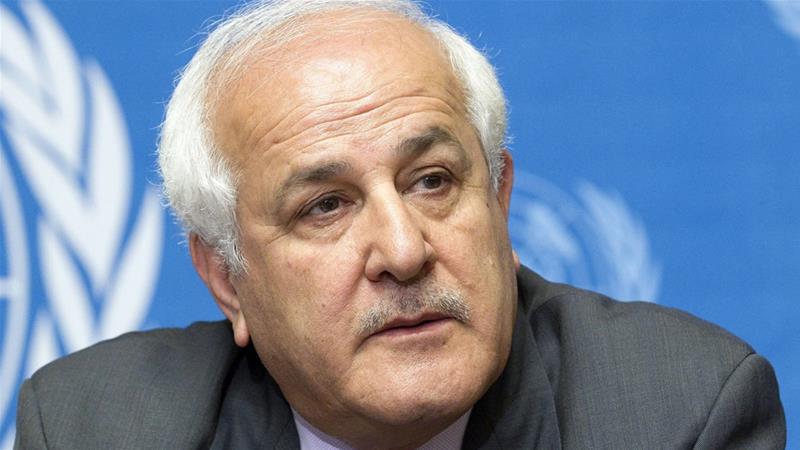 Palestine’s ambassador to the United Nations has called on the UN Security Council to form an independent commission tasked with looking into Israel’s “crimes” including the killing and wounding of Palestinian protesters in the besieged Gaza Strip.

Riyad Mansour said on Friday evening that the Palestinian Authority (PA) is set to submit a list of complaints in the coming days to the UN Human Rights Council, with the intention of establishing an investigative committee or a fact-finding mission.

“It seems that the Israeli occupying forces are not restraining themselves, they’re not listening to anyone and they are continuing with this massacre,” Mansour told reporters in New York.

The remarks come as Israeli forces shot dead four Palestinians, including a 15-year-old boy, and injured hundreds more as more than 10,000 gathered in a mass demonstration in the Gaza Strip demanding the right of return for Palestinian refugees.

Friday’s demonstration was the fourth in as many weeks of a planned, weeks-long sit-in dubbed the Great March of Return. The latest deaths bring the number of Palestinians killed by Israel since the protests began in late March to 39.

According to the Palestinian health ministry, more than 4,000 have been wounded.

Over the weeks, Israel’s use of lethal force has drawn international condemnation.

Israel last week said it would launch an investigation into the killing of a child protester, but it has continued to deploy its open-fire policy along the border with Gaza.

Mansour noted several Arab member states’ rejection of Israel launching its own investigation, as it cannot be “credible”, and reiterated his call for an “independent, unbiased” probe.

To date, the UNSC has not commented on the events in Gaza as the US – Israel’s ally and permanent member of the council – continues to block proposed statements critical of Israel’s use of force against unarmed protesters.

As such, the PA has decided to turn to the Geneva-based Human Rights Council for assistance. The council has in the past agreed to Palestine’s requests, Mansour noted, when it approved three fact-finding missions.

Earlier this month, the prosecutor of the International Criminal Court called for an end to violence in Gaza, adding the Palestinian territories were subject to a preliminary examination by her office and she was monitoring events there closely.

The call came a day after the death of photographer Yaser Murtaja, who lost his life after being shot in the stomach by Israeli forces, despite wearing a blue flak jacket marked with the word “press”.

In a statement last week, the investigators expressed “outrage” that the firing of live ammunition may have amounted to unlawful killings and injuries. They noted that an independent probe was the only way to “truly address what has happened in Gaza, and to prevent its recurrence.”