Thursday's quake was centred 124 kilometres east of Kimbe and about 200 kilometres south-west of the town of Rabaul at a depth of almost 40 kilometres, just before 7am local time (8am AEDT) on Thursday.

Police officers had not yet been able to contact villages close to the epicentre.

"A tsunami threat exists for parts of the Pacific located closer to the earthquake," the Pacific Tsunami Warning Centre said, adding that the waves were forecast to be under 30 centimetres for the coasts of Papua New Guinea and the nearby Solomon Islands.

Pacific Tsunami Warning Centre oceanographer David Walsh said any tsunami from the earthquake would only affect areas immediately around the epicentre.

But scientists don't have any tide gauges close to the where the earthquake happened, so are unable to say yet whether tsunamis have been generated.

Walsh said areas further away were unlikely to be affected because the earthquake was not "terribly large" and many areas were shielded by land masses and islands. 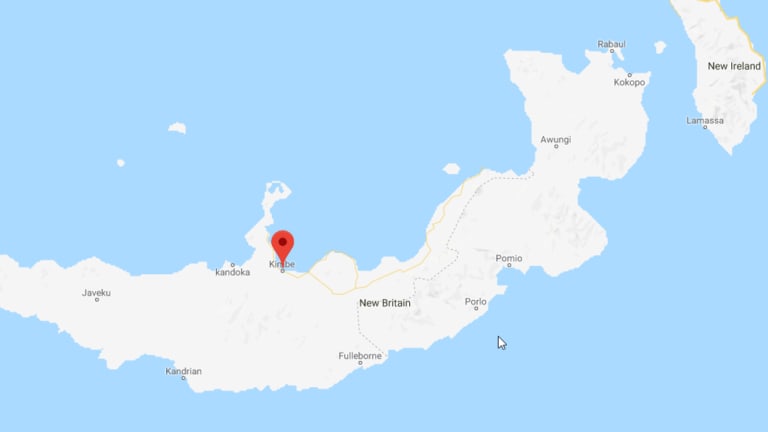 Australia's Tsunami Warning Centre said its coastlines were not at risk.

The quake was initially recorded with a magnitude of 7.3 but was downgraded. It was followed by aftershocks of magnitude 5.7 and 5.9.

In March, a 6.6 magnitude quake struck nearby and no casualties or damage were reported.

Papua New Guinea, one of the world's poorest countries, sits on the geologically active Pacific Ring of Fire and is still recovering from a 7.5 quake that hit 900km to the west in February, killing at least 100 people.

Meanwhile, a magnitude 6 earthquake struck off the Indonesian island of Bali on Thursday, the US Geological Survey said, causing brief panic among residents although there was no potential for a tsunami and no immediate reports of major damage.

The quake located in the Bali Sea shook buildings for several seconds and some residents briefly left their homes in the island's capital Denpasar, a Reuters witness said.

The USGS put the epicentre as 40 kilometres north-east of Sumberanyar on nearby Java island.

The annual meetings of the International Monetary Fund and World Bank are being held in Bali this week and attended by more than 19,000 delegates and other guests, including ministers and some leaders.

Indonesia suffered a powerful 7.5 magnitude earthquake and tsunami on the island of Sulawesi last month, killing more than 2000 people and leaving up to 5000 missing.