Paramedics start wearing bodycams after a rise in attacks in London

Paramedics have started wearing body-worn cameras for the first time after 529 violent assaults were reported in London during the coronavirus pandemic.

London Ambulance Service rolled out the trial on Monday in areas where emergency workers are considered to be most at risk.

Figures show London Ambulance Service staff were victims of 529 violent attacks between April last year and the end of January.

They include kicking, punching, head-butting, biting and spitting with 31 assaults with weapons also reported.

It comes after ministers said they planned to bring forward legislation to double the maximum sentence for those convicted of assaults on police, prison staff, custody officers, fire service personnel, search and rescue workers and frontline health workers. 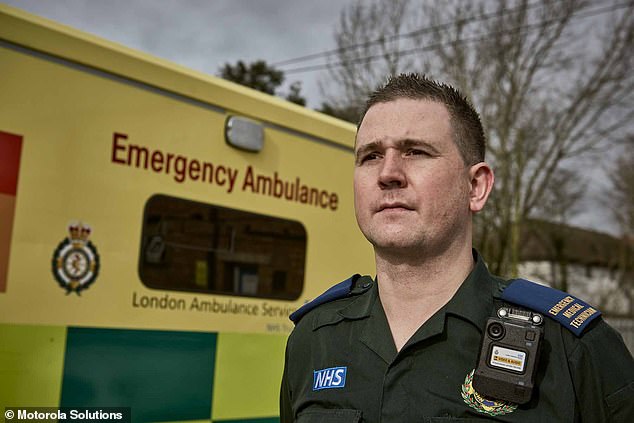 London Ambulance Service rolled out the trial on Monday in areas where emergency workers are considered to be most at risk. Pictured, Emergency Ambulance Crew member Gary Watson, 33, will be among the first to wear one

There were 834 incidents of verbal abuse and threats between April last year and January.

The cameras are attached to paramedics’ uniforms so they can hit a button to start recording when patients or members of the public become aggressive or abusive.

Emergency Ambulance Crew member Gary Watson, 33, will be among the first to wear one. It comes two years after he suffered a torn ligament and serious injuries to his face, throat and neck when he was attacked by a drunk patient in January 2018.

Two other medics were also injured and a fourth was badly shaken but the man, who was found guilty, only received a suspended sentence. 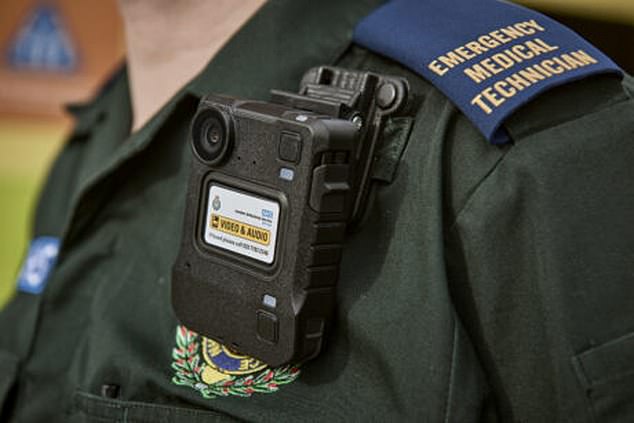 He told the BBC: ‘I had strangulation marks around my neck, a torn ligament on my shoulder which I’m still suffering from now, and a back injury which resulted in me being off for about three months.

‘So I had to stand there and be accused and be told that actually it was me that started this. This went on for hours and it was a two-day trial. It was a horrible place to be, horrible.’

The attacker was handed a 12-month suspended sentence on the condition that he attended a drug and rehabilitation course.

Mr Watson, based at Croydon Ambulance Station, said: ‘We need these cameras. We get up every day to help people, not to be severely beaten.

‘Wearing these cameras should act as a deterrent and if it doesn’t then at least there will be evidence which will hopefully mean tougher sentences for criminals.’

Due to concerns many more go unreported, two violence reduction officers have been recruited in the Capital to help protect staff.

Between April 2020 and January 2021 the attacks rose yet again, despite lockdown forcing more people to stay indoors to take pressure off the NHS.

In 2020, the most attacks were in July – the same month pubs were opened following weeks of lockdown – when 71 assaults were reported.

Louise Murray, one of the violence reduction officers, said: ‘We are working closely with the police to help support staff and volunteers when they have been assaulted or abused.

‘Any video footage recorded on our cameras can be used as evidence and in turn we hope it will help to secure more prosecutions.’

So far this financial year, 27 people have been successfully prosecuted for attacks on ambulance staff – 18 of those were jailed.

Criminals who assault emergency workers will face up to two years in jail under a new law announced by the Government.

More than 11,000 people were prosecuted for assaulting an emergency worker in 2019, the Ministry of Justice said.

The Conservatives pledged in their 2019 election manifesto to consult on doubling the maximum sentence for assaulting emergency service workers.

Assaults cover acts including being pushed, shoved or spat at, but prosecutions can take place under more serious offences when an emergency worker is seriously injured.

It will be the second change in two years after the 2018 Assaults on Emergency Workers (Offences) Act increased the maximum sentence from six months to a year.

The law change also meant that when a person is convicted of offences including sexual assault or manslaughter, the judge must consider whether the offence was committed against an emergency worker as an aggravating factor meriting an increase in the sentence.

The Home Secretary Priti Patel said: ‘Our police officers, firefighters and other emergency workers are our frontline heroes who put their lives on the line every single day to keep us safe, yet some despicable individuals still think it’s acceptable to attack, cough or spit at these courageous public servants.

‘This new law sends a clear and simple message to these vile thugs – you will not get away with such appalling behaviour and you will be subject to the force of the law.’

New legislation means anyone found guilty of attacking emergency services staff and volunteers can be jailed for 12 months and more serious cases of assault could result in two years in prison.

London Ambulance Service chief executive Garrett Emmerson said: ‘Nobody should feel unsafe or threatened at work – particularly our crews and call handlers who continue to make huge sacrifices to care for patients and have never worked harder.

‘Looking after our people, keeping them safe and supporting their wellbeing is our top priority.

‘It is shameful that our staff and volunteers can be abused while caring for others and we will always push for the prosecution of anyone who attacks them.’

It comes after a paramedic shared an emotional video explaining how a patient she was treating spat on her in a lockdown assault that left her feeling ‘contaminated, broken and defeated’.

Tracy Higginbottom was spat on while taking a young woman to hospital in an ambulance during a night shift in North Cornwall.

Ms Higginbottom, who has been a health worker for more than 20 years, took a month off work to recover after the attack, but decided not to press charges against the offender.

In a powerful six-minute clip, in which Tracy can be seen holding back tears, she speaks of the impact it had on her as well as her fear of returning to work and potentially passing on coronavirus to a colleague or patient.

She said: ‘Violence and aggression appear to be escalating, and is something we have to deal with as a part of our job. But I’ve never experienced anything quite like this.

‘The patient had taken drugs and consumed alcohol in the community. She was out of control and vulnerable. We have a duty of care, and I was genuinely concerned for her welfare. So I decided she needed to go to hospital, even though it was an hour and a quarter away.

‘Afterwards I felt very distressed and traumatised. So I took some time out, because you need to be in the right frame of mind in my role.

‘Now I’m back at work with support. I was so determined not to allow this horrible experience stop me doing the job I love and from being a part of my wonderful green family.’

The South Western Ambulance Service NHS Foundation Trust (SWASFT) said it has seen more than 100 staff members physically assaulted while on duty by members of the public since lockdown was imposed. 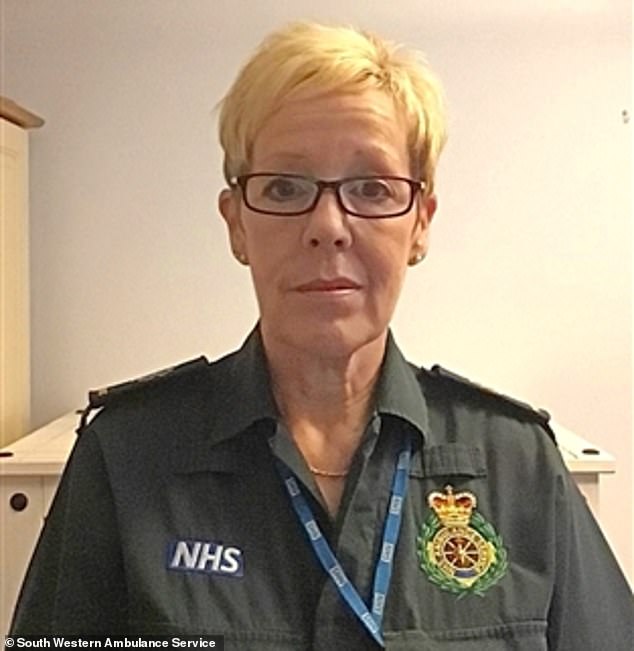 Executive Director of Quality and Clinical Care, Jenny Winslade, said: ‘We praise Tracy for her bravery and courage in speaking out about this dreadful experience.

‘Nobody should have to face that kind of unacceptable behaviour, especially not a healthcare professional caring for a patient.

‘Sadly our people face violence and aggression every day while they are trying to protect and save our patients’ lives, which can have serious consequences on them, their families and colleagues.

‘They put themselves at risk for the sake of others, and we support whatever action is necessary to protect them from harm. Please respect our people, and help them to help you.’

Ambulance staff in the region reported 106 physical assaults by patients and other members of the public between March 23 and August 23 last year.

This figure compared with 77 during the same time period in 2019.

They also reported 212 incidents of verbal abuse during the five months, compared with 183 last year. More than one in four (56) of the verbal incidents were by callers to 999 Control Room staff.

The reported incidents included a separate spitting assault against a staff member in Bristol, which prompted a public appeal by SWASFT and Avon and Somerset Police. 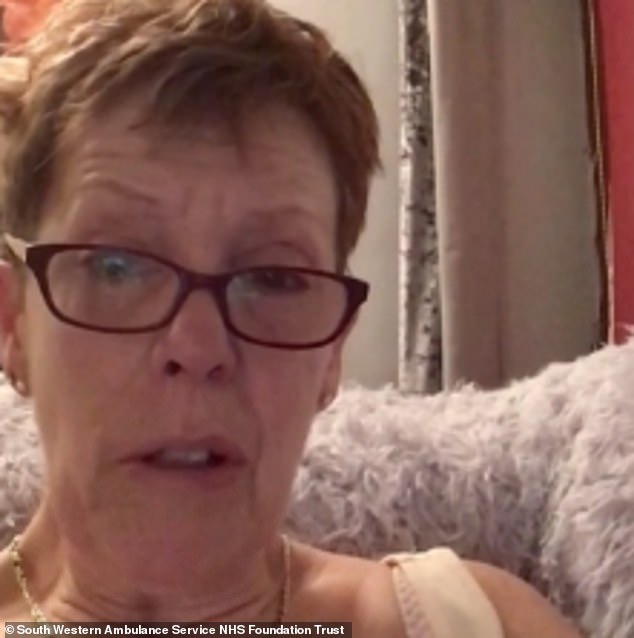 Ms Higginbottom, who has been a health worker for more than 20 years, took a month off work to recover after the attack, but decided not to press charges against the offender

Additionally Emergency Care Assistant Mark Walker and a police officer were spat at by a patient Mark was trying to treat in Dawlish, South Devon.

The offender was sentenced to 22 weeks in prison for assaulting two emergency workers and being drunk and disorderly in a public place.

A man was also jailed for 20 weeks after coughing in a paramedic’s face.

The #Unacceptable campaign, which was launched in 2018, aims to highlight the abuse and assaults faced by emergency services workers while on the job.

It reminds people that assaults of this nature are unacceptable, and are a crime under the Assaults on Emergency Workers (Offences) Act 2018.

SWASFT is encouraging people to share social media posts in support of the campaign to spread the message as far as possible.

A man was arrested after paramedics were attacked with a knife and had their ambulance rammed by a car as they hid inside on Christmas Day.

The incident unfolded at around 4.30pm when staff from the South Western Ambulance Service responded to a medical incident at a property on Morse Street in Swindon, Wiltshire.

While at the address they became fearful for their own safety and left to seek sanctuary in their ambulance, which was then driven into by a car.

Wiltshire Police said a 39-year-old man has been arrested on suspicion of affray, criminal damage and drink driving. 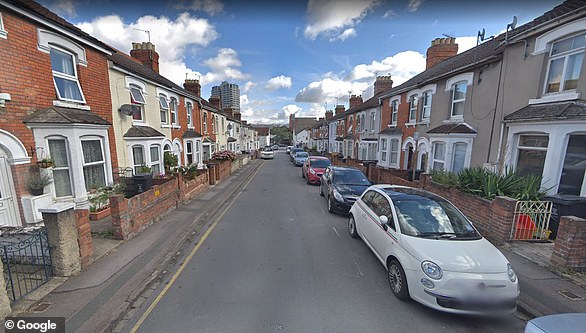 Incident unfolded at around 4.30pm when staff from the South Western Ambulance Service responded to a medical incident at a property on Morse Street in Swindon, Wiltshire (pictured)

Inspector Steve Love said: ‘It is a sad reality that while attending calls to protect the public that emergency service staff are put in situations where they fear for their own safety on a daily basis and Christmas Day is no exception unfortunately.

‘Nobody should be made to feel in danger when trying to carry out their work, especially when that work involves protecting our communities.

‘We will do all we can to protect emergency workers doing their job and urge the public to respect our officers and members of the ambulance service and fire service and to help us to help you.’