L’EXIT! People rush to escape Paris with train tickets selling out as Macron plunges a THIRD of French people into new month-long lockdown amid surge in Covid cases and vaccine roll-out shambles

Parisians piled on to trains in an exodus from the French capital today hours before a third of the country is plunged into a new month-long lockdown.

Trains heading west to Brittany and south to Lyon were fully booked on Friday with platforms packed at the Gare Montparnasse as 12million people in the Paris region brace for the new restrictions.

French PM Jean Castex announced the new measures last night amid a third wave of Covid-19 cases which has thrown Paris hospitals into crisis, with vaccines coming too slowly to protect large chunks of the population.

The vaccine shambles took yet another twist today when France said that only over-55s should get the AstraZeneca shot – a 180-degree reversal from its earlier ruling that older people should be denied the jab.

Health officials said the new rule resulted from the fact that the blood clots which threw the EU’s roll-out into further crisis this week had only been seen in under-55s.

But EU safety experts ruled yesterday that the jab was safe and effective for all age groups – saying there is no increased risk of blood clots linked to the vaccine. 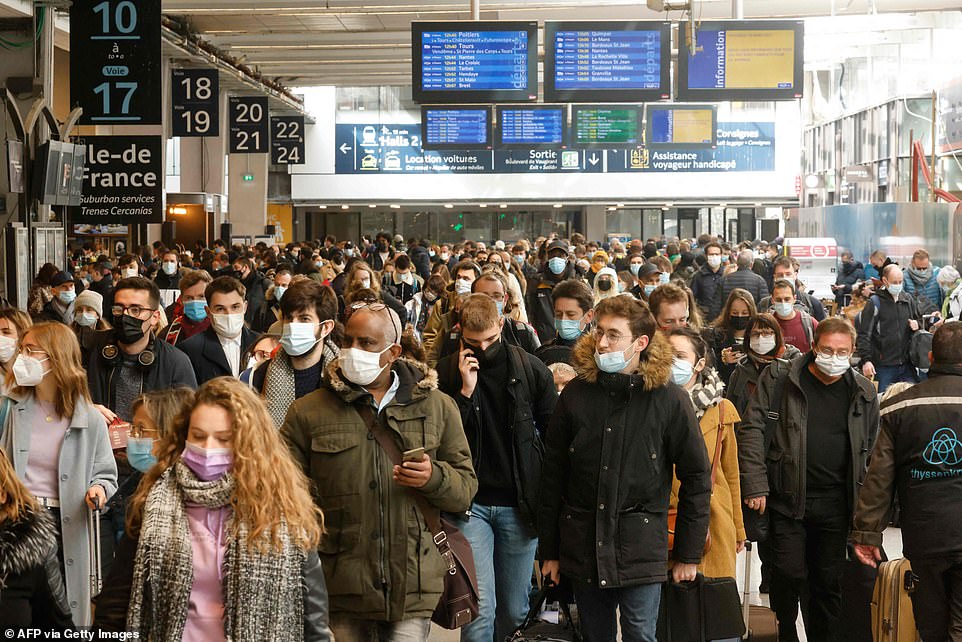 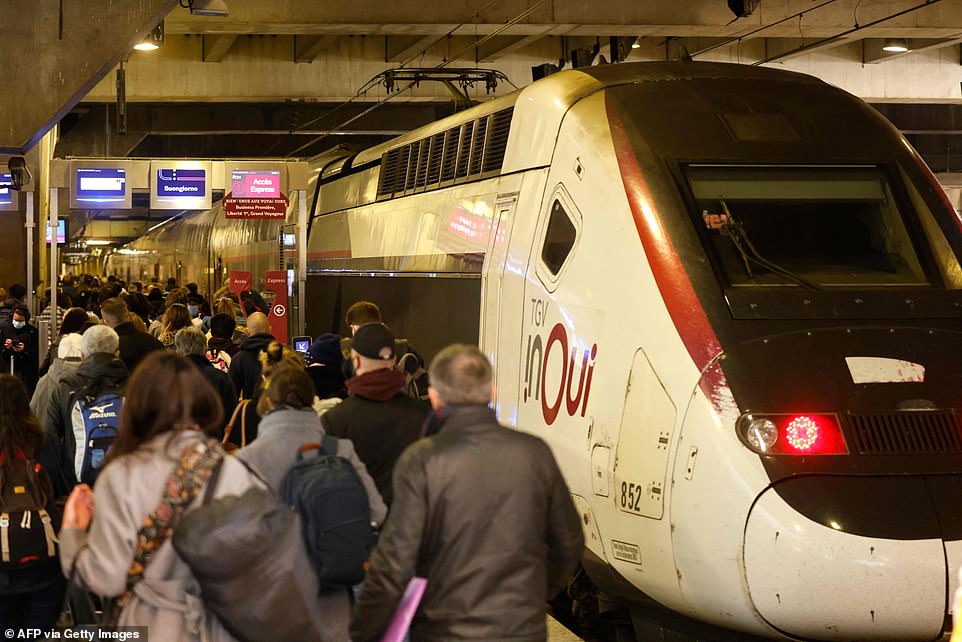 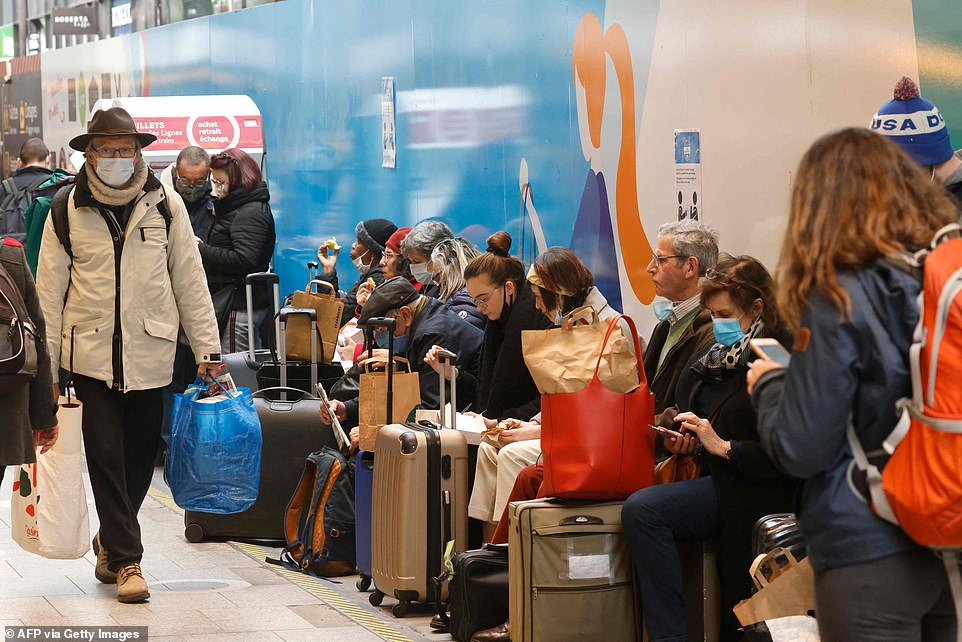 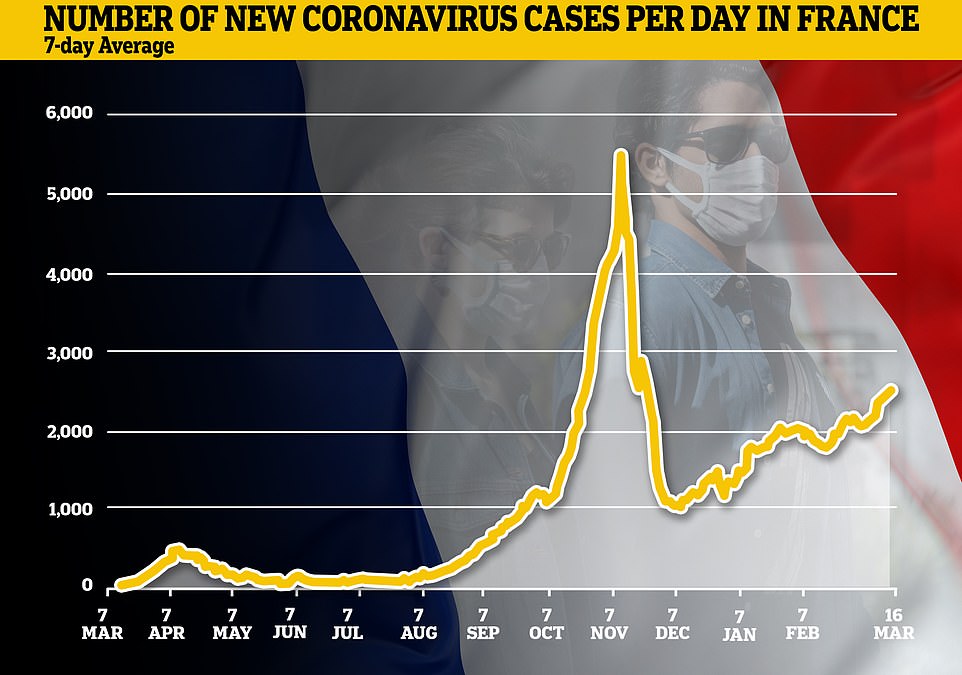 Emmanuel Macron is under fire at home and abroad over his handling of the crisis, with opponents saying that he had ‘failed’ to prevent new measures being needed.

‘Let’s be clear, we’re in a third wave mostly down to the rise of this famous British variant,’ Macron said on Wednesday after a day of talks with medical staff in Paris.

Macron had previously been criticised for rubbishing the AstraZeneca vaccine as ‘quasi-ineffective’ in older people in what was seen as an act of post-Brexit ill will.

France initially said that over-65s should not get the vaccine because of limited data on older people in clinical trials.

It later revised its stance to say that 65-to-74-year-olds could get the jab after more data from the UK showed that the vaccine is highly effective.

Now, France has lurched the other way by saying that older people should not only get the vaccine but have exclusive access to it – with under-55s now banned.

Amid the chaos, France is lagging way behind Britain in vaccinating its population, meaning that most of the population is still susceptible to the third wave.

In all, just over 5.5 million people in France have had at least one vaccine shot and nearly 2.4 million have received both doses, official data show. 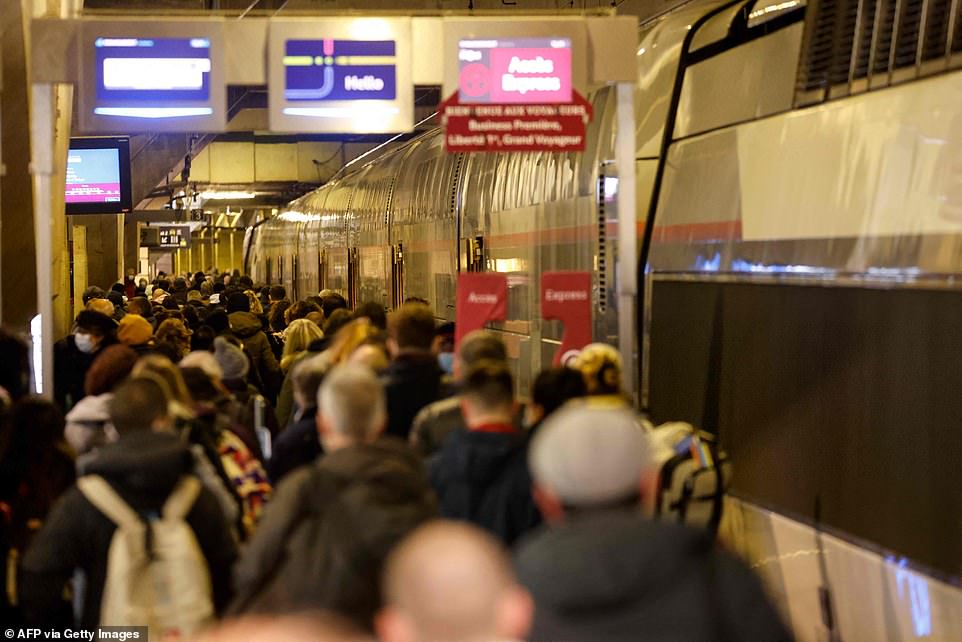 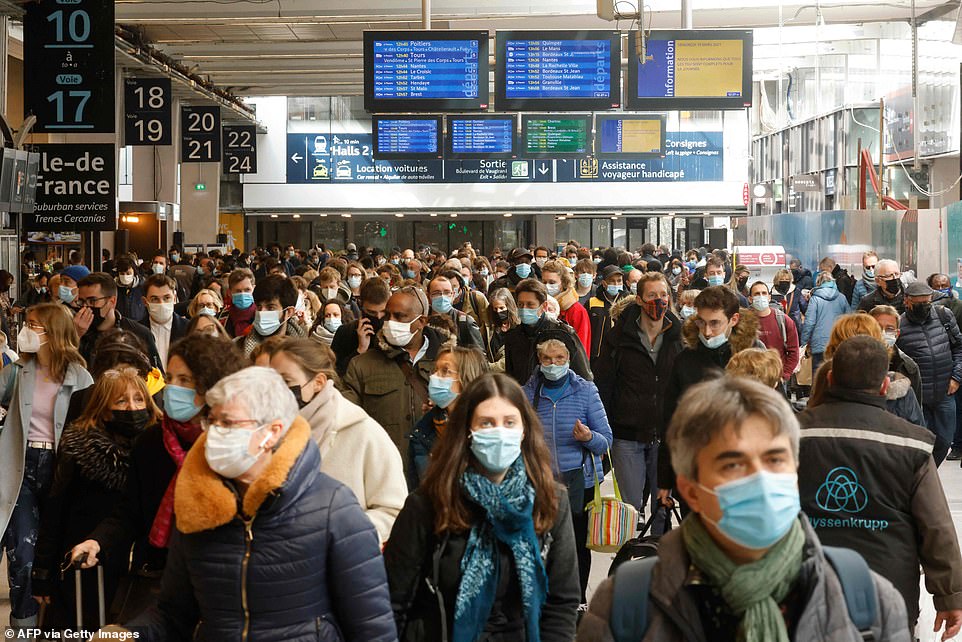 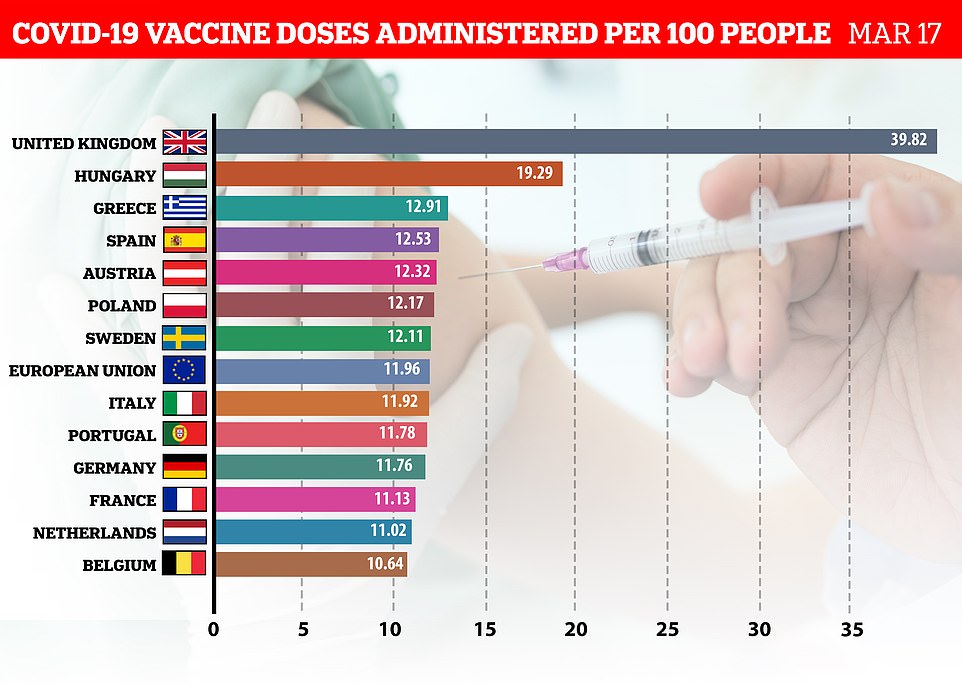 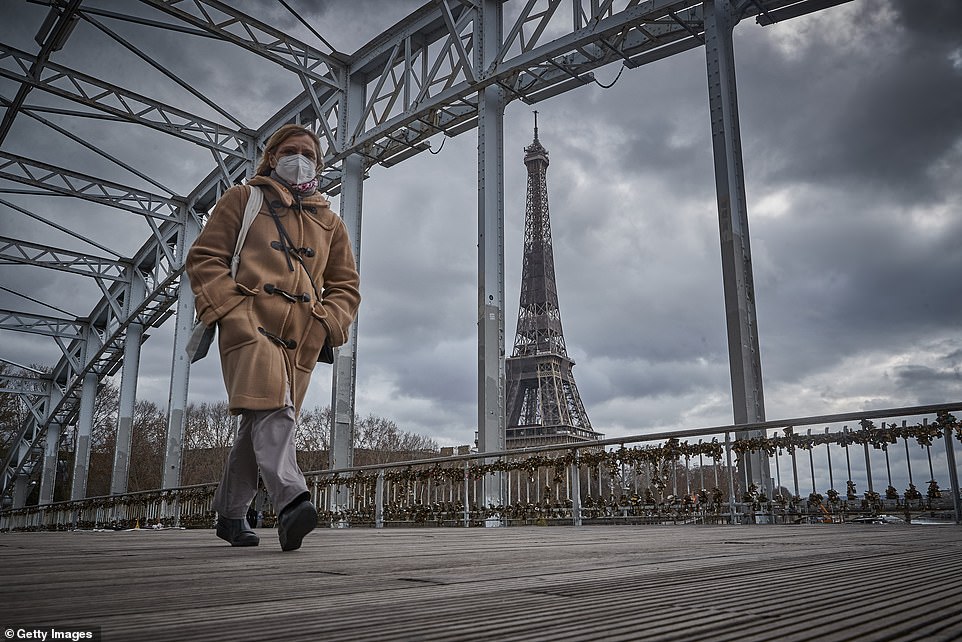 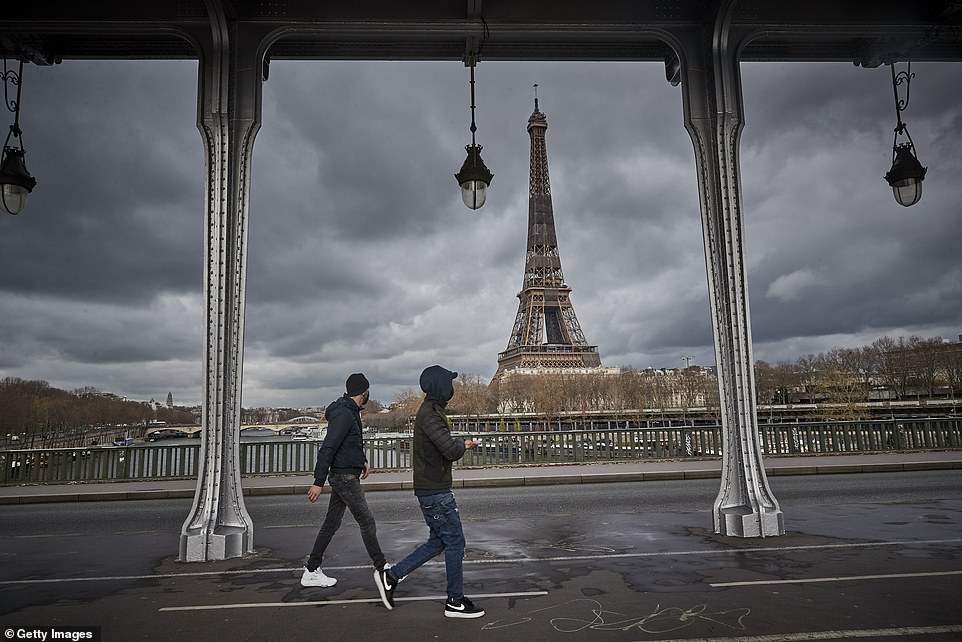 People walk over a deserted bridge in a cloudy Paris, where people will once again have to fill out a form to justify their movements to authorities

While the government claims the new lockdown measures are lighter than last year’s national lockdowns, Parisians will still have to show papers to justify leaving their homes – prompting many to seek refuge outside the cramped capital.

Trains leaving Montparnasse station – which serves destinations in Brittany and the southwest – were completely full after a rush of bookings late on Thursday.

A spokesman for national rail operator SNCF said trains to some destinations were fully booked after having a 60-70 per cent level of occupancy on previous Fridays.

Maiwenn, a 19-year old student clutching a suitcase, said she had decided to leave Paris to spend the rest of the university year with her family in in Brittany.

‘I’m going to stay there until the end of the term,’ scheduled for mid-April, she said.

‘It’s been roughly a year that our courses have been on distance learning so we’re starting to get used to it.’

France had hoped to stave off new lockdowns with a nationwide 6pm curfew and weekend shutdowns but the new measures affect around a third of the population.

The other regions affected by the new measures notably include the Hauts-de-France region of northeast France which covers the city of Lille, and the Alpes-Maritimes on the Mediterranean, as well as Seine-Maritime and the Eure in the north.

Health minister Olivier Veran expressed hope that this regional lockdown would be the last, with the situation helped by the onset spring and the vaccination campaign.

As in previous lockdowns, a form written out or downloaded on a phone will be needed to justify why a person has left the home in areas under the new restrictions.

Outdoor exercise is allowed up to six miles from home for an unlimited amount of time but non-essential shops will have to close.

However bookshops – deemed as essential to public wellbeing – can stay open and hair salons could also remain open with reinforced sanitary protocols.

The move comes after France on Wednesday announced its biggest daily rise in Covid cases since its most recent lockdown was lifted in late November last year. 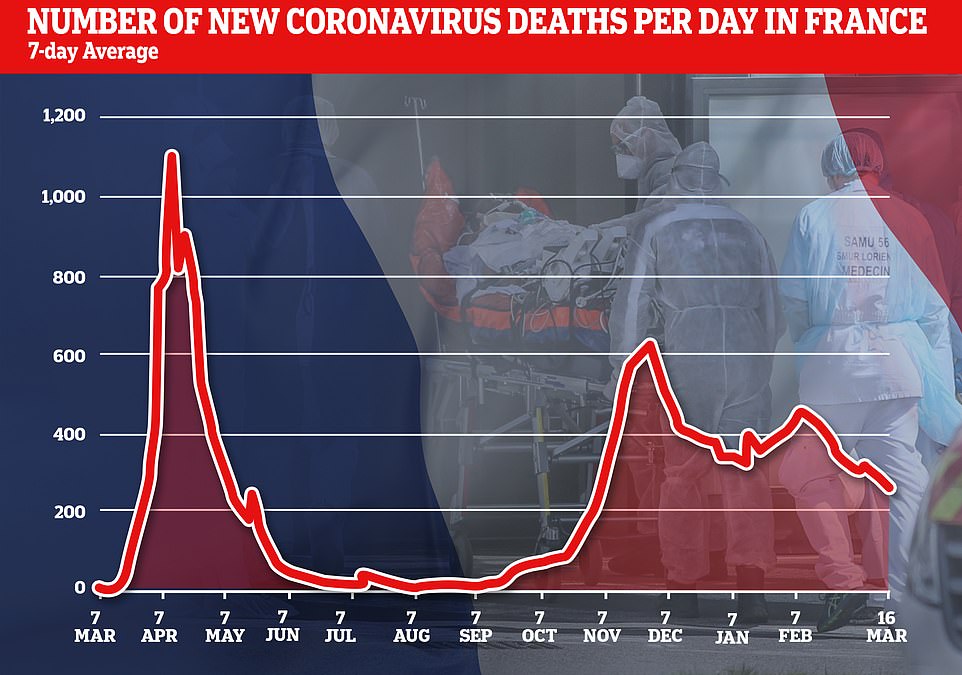 While Covid deaths in France have been steadily falling since last year, there are fears the trend could reverse as hospital intensive care wards are overwhelmed 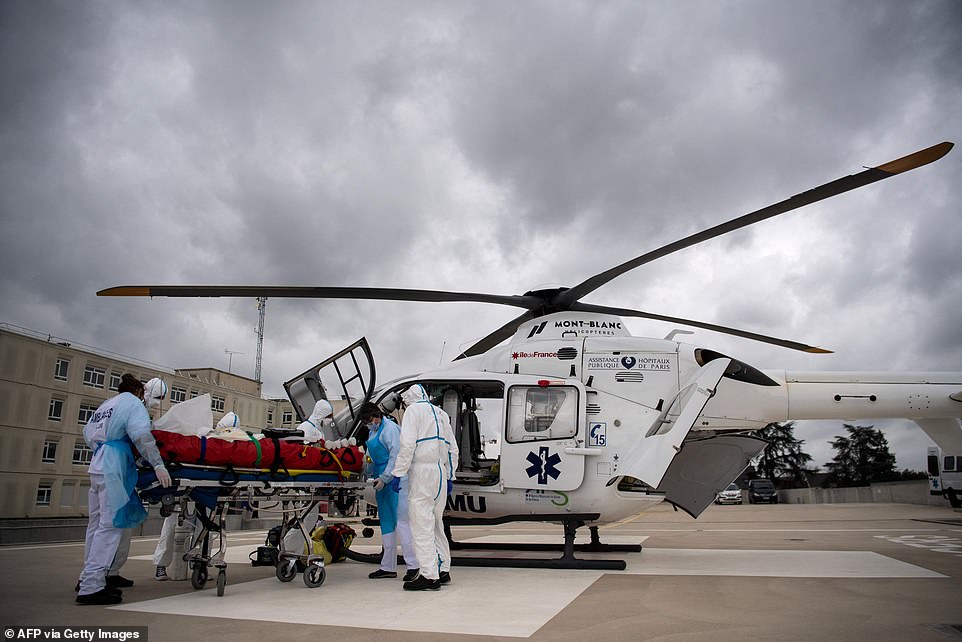 Paris has been at the forefront of France’s third wave of Covid, with patients evacuated from hospitals in the city on Monday after intensive care beds ran out 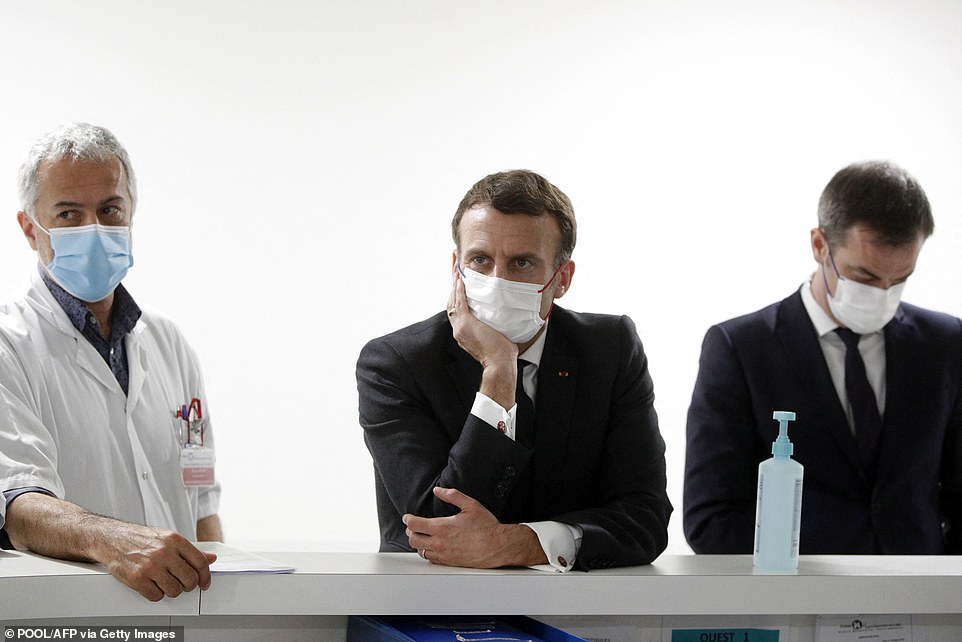 Macron, who visited hospitals in Paris on Wednesday, said any new measures would be ‘proportionate’ and made on a territory-by-territory basis