Patisserie Valerie auditors are fined £2.3m for missing red flags and failing to quiz bosses over three years before cake firm collapsed with loss of 920 jobs due to £40MILLION blackhole

Auditors of collapsed cake chain Patisserie Valerie have been fined £2.3million after missing red flags and showing ‘a serious lack of competence’, according to a damning report by regulators.

Some 920 jobs were lost at the cake chain after a £40million ‘black hole’ was unearthed in 2018, leading to a police investigation into fraud allegations.

Patisserie Valerie crashed into administration the following year. Having been worth £450million at the height of its success, it was later sold to Causeway Capital Partners for just £5million. 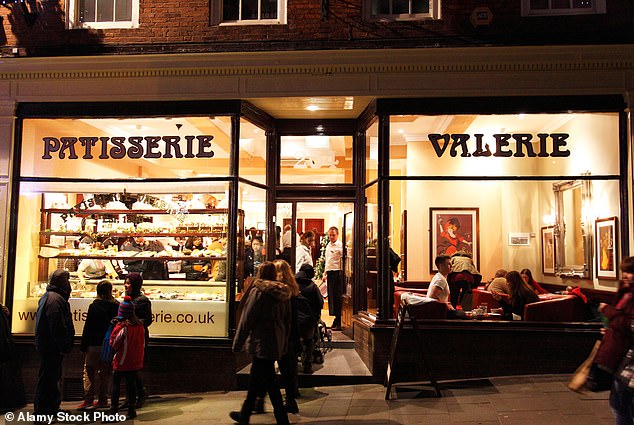 The FRC said a fine against Grant Thornton would have been £4million, but was adjusted for ‘exceptional levels’ of co-operation.

But the company must now report annually to the regulator for three years to show what efforts it is making to improve its audits and change its culture.

A so-called ‘Severe Reprimand’ was also issued and the company has agreed to pay the FRC’s costs for the investigation.

Mr Newstead, who carried out the work for Grant Thornton, was given a three-year ban from carrying out audits or signing off audit reports.

Both accepted there had been failures in parts of their audit work.

Timeline: from Soho patisserie to national chain to administration … and beyond

1926: Patisserie Valerie is founded as a small cake shop in London

It says its main subsidiary is facing a winding up order from HMRC.

Trading in shares of the company, valued at £450m, are suspended.

October 12: Luke Johnson agrees to pump £20m of his own money into PV to keep it afloat amid claims of ‘fraudulent activity’.

November 15: chief exec Paul May is replaced by Steve Francis, a specialist in business rescue and turnaround. Johnson remains as chairman but agrees to waive his £60,000 salary.

January 16, 2019: Patisserie Valerie says it had found ‘thousands of false entries into the company’s ledgers’, resulting in profits ‘materially below’ the numbers reported when the black hole was first found. Forensic accountants say they had found ‘very significant manipulation’ of the chain’s books.

January 22: Patisserie Holdings goes into administration. Around 70 branches close with the loss of 900 jobs.

February 14: Causeway Capital Partners buys a large chunk of the business as one of a series of deals and sell-offs which raise £13m and save 2,000 jobs.

The FRC said: ‘In each of the three years, the audit work included serious breaches of relevant requirements across the four different audit areas, often repeated year on year…

‘Consequently, each of the audits failed in their principal objectives of providing reasonable assurance that the financial statements were free from material misstatement, whether caused by fraud or error.’

‘The audit of Patisserie Holdings Plc’s revenue and cash in particular involved missed red flags, a failure to obtain sufficient audit evidence and a failure to stand back and question information provided by management.’

Heavy cost-cutting measures had seen the company stop putting butter in its pastries, replacing it with cheaper margarine.

Ultimately, the company collapsed and was revealed to have been overstating its accounts for years.

Following administration, Patisserie Valerie was found to have overstated its cash position by £30 million and failed to disclose overdrafts of nearly £10 million.

It led to several arrests for fraud and an investigation by the Serious Fraud Office.

A spokesperson for Grant Thornton said the company has invested significantly in audit practice since the scandal.

He added: ‘We have cooperated fully with the FRC and acknowledge the investigation’s findings relating to our audits in 2015–2017.

‘We regret the quality of our work fell short of what was expected of us in this instance.’

A civil case had previously been launched against Grant Thornton by liquidators at FRP Advisory, claiming the auditor was negligent.

The spokesperson said: ‘We will continue to rigorously defend the civil claim brought by Patisserie Valerie’s liquidators, which ignores the board’s and management’s own failings in detecting the sustained and collusive fraud which took place.

‘We recognise that there were shortcomings in our audit work; however, our work did not cause the failure of the business.’