Defence Minister Peter Dutton has filed Federal Court defamation proceedings against a refugee advocate over a tweet labelling him a “rape apologist”, making good on his threat to take legal action over social media posts.

In a statement of claim filed on Friday, Mr Dutton’s lawyers say Shane Bazzi, who was knocked back in his bid to apply for a visa to visit asylum seekers on Nauru in 2016 by the Nauru Consulate-General, defamed the Morrison government minister in a February 25 tweet this year. 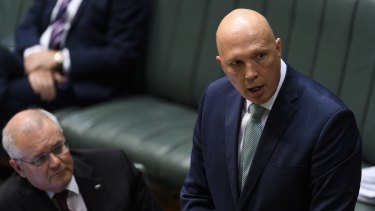 Mr Dutton is seeking damages, including aggravated damages, and costs. He is the second federal Liberal minister to launch defamation proceedings this year, following Christian Porter’s highly-publicised case against the ABC.

In the tweet, Mr Bazzi posted a link to a Guardian Australia article reporting Mr Dutton’s assertion on Sky News in 2019 that some women on Nauru “have claimed that they’ve been raped and came to Australia to seek an abortion because they couldn’t get an abortion on Nauru”. Mr Dutton suggested they were “trying it on” in order to secure a medical transfer to Australia.

Mr Bazzi wrote above the link: “Peter Dutton is a rape apologist.”

The tweet was published in the wider context of reporting on allegations made by former Liberal staffer Brittany Higgins, who has said she was raped by another former staffer in Parliament House in March 2019.

Greens Senator Larissa Waters issued an apology last month for a February 25 tweet in which she accused the former Home Affairs minister of being an “inhuman, sexist rape apologist” after he said he hadn’t been “provided with the she said, he said details of the allegations” involving Ms Higgins.

“I accept that there was no basis for those allegations and that they were false,” Senator Waters said. “I unreservedly apologise to Minister Dutton for the hurt, distress and damage to his reputation I have caused him.”

Mr Dutton told 2GB radio host Ray Hadley in March that he was “going to start to pick out some of them [social media users] to sue, because we need to have … a respectful public debate”.

“A lot of lazy journalists pick up these tweets and believe that they’re representative of larger community view, when they’re not,” he said.

They say he is entitled to aggravated damages on a number of bases, pointing to the “extravagant language” used in the tweet and the fact that the mode of publication reached “a very large number of people”. Mr Dutton’s lawyers also claim Mr Bazzi was aware Senator Waters had apologised for making similar statements on Twitter and she had “acknowledged that there was no basis for the statements”.

Mr Bazzi is being represented by O’Brien Criminal and Civil Solicitors in Sydney, who said on Monday the proceedings would be vigorously defended. It was not possible for the firm to comment at length because documents in the case had only recently been filed by Mr Dutton’s lawyers.