PEWDIEPIE and Marzia Bisognin's wedding has cost the YouTubers an estimated £121,500, it has been reported.

The 29-year-old, whose real name is real name Felix Kjellberg, and his wife, 26, splashed out for the ceremony at Kew Gardens in London. 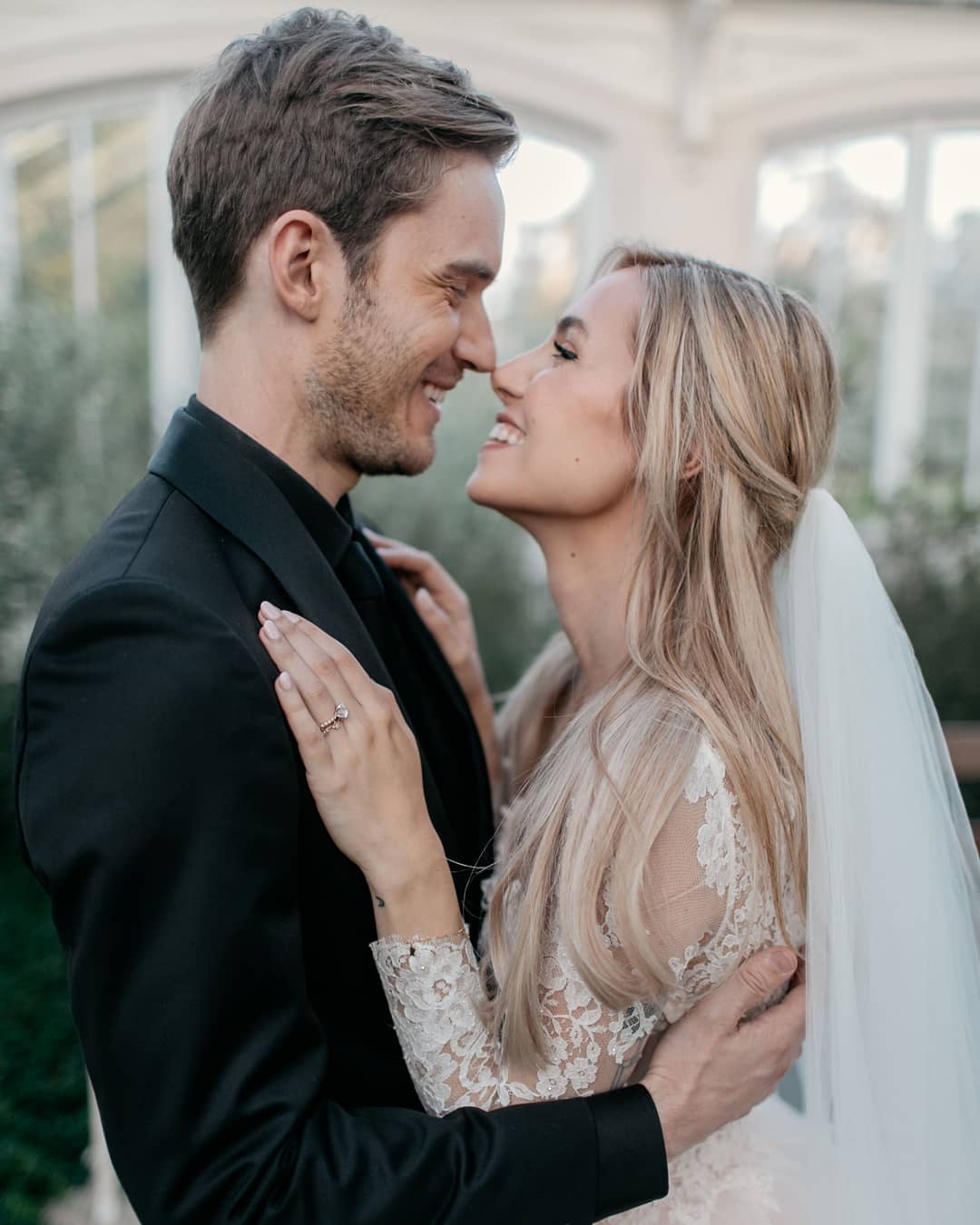 PewDiePie, who is YouTube’s most subscribed independent creator wanted, reportedly wanted an intimate affair attended by just close family and friends of the couple.

The wedding ceremony took place in the stunning Nash Conservatory and Temperate House at Kew Gardens, which charges £21,000 to host a wedding, though they would have got a Monday discount.

London-based specialists in vintage, antique, and bespoke engagement jewellery, Gatsby Jewellery, researched the details of the wedding to come up with the estimated costs, the MailOnline reports.

It has been estimated they paid around £6000 for the sound system and DJs from a specified list of suppliers plus £3000 for the food and drink.

Marzia wore a structured corset, delicate long lace sleeves, a simple veil, and tulle layers around the hips which was made for her by designer Joanne Fleming.

He is know to enjoy designer clothing and based on London’s Savile Row prices, it's likely to have set him back around £5,600.

With all the other costs such as photographers, flowers and the cake the bill is likely to be over £100,000.

A new report  is now officially the richest YouTube star in history, with a net worth of £30million and a monthly income of £6.5million.

That eye-watering number comes from £5.6million in merchandise sales on his personal website – and £935,236 in ad revenues on his videos.

Now, he spends his earnings modestly on exotic pets, seafood dinners and £350 trainers.

Despite recently posting a video that said he felt sorry for poor people, PewDiePie has openly said he doesn't like to talk about money as he doesn't see it as important – and has made huge donations to various charities over the years.

But the gaming fanatic – who now lives in Brighton – hasn't always had millions in the bank. 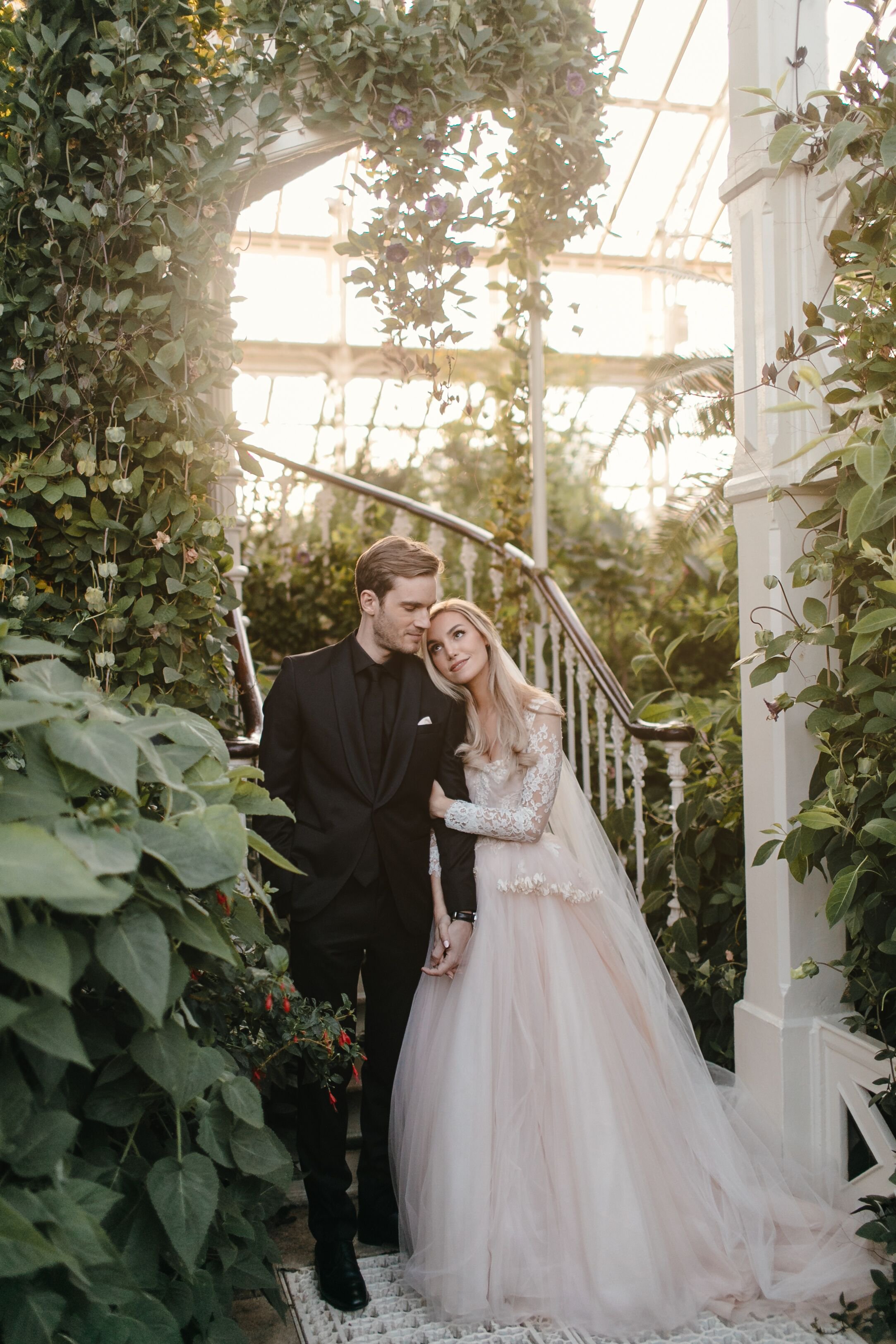 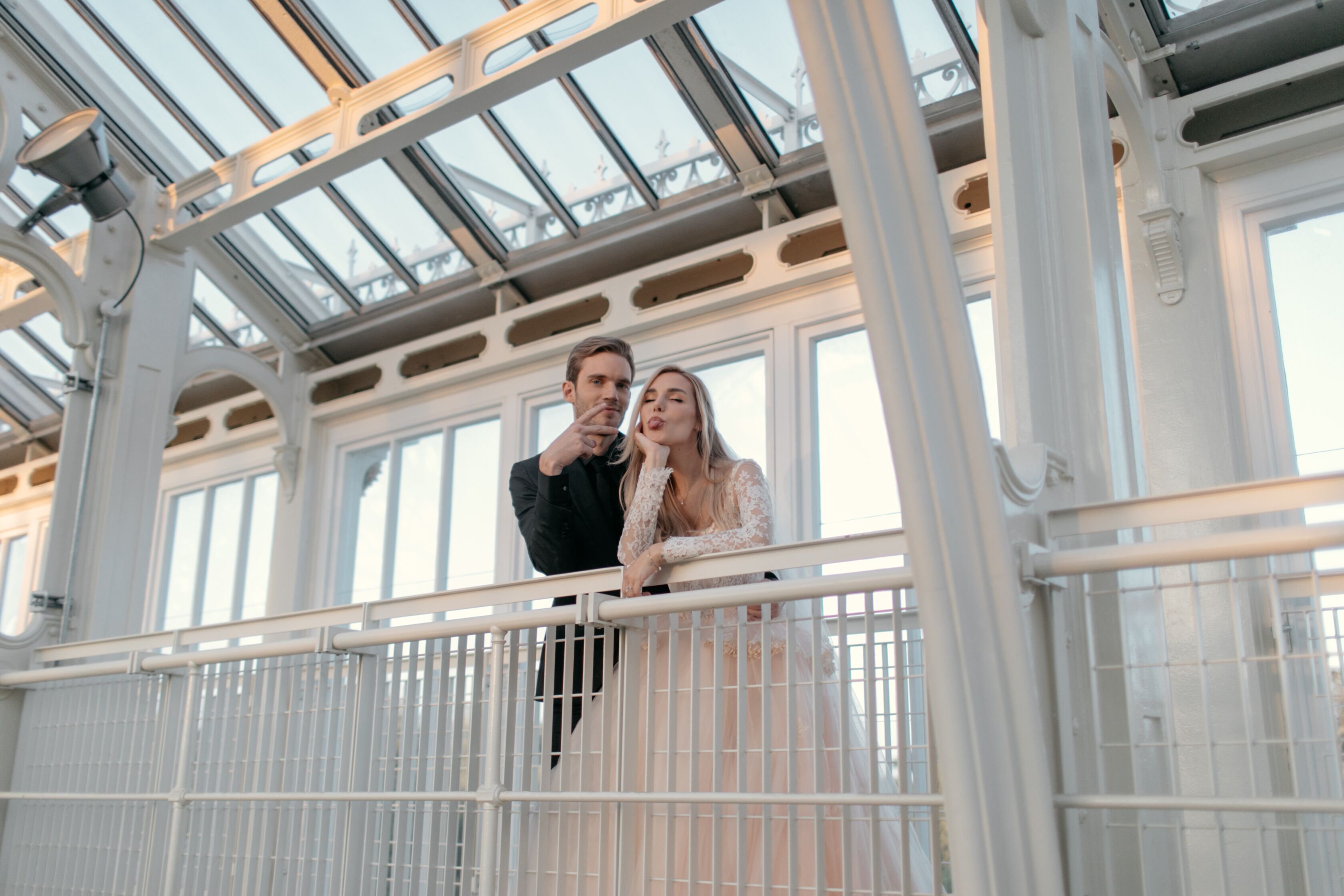 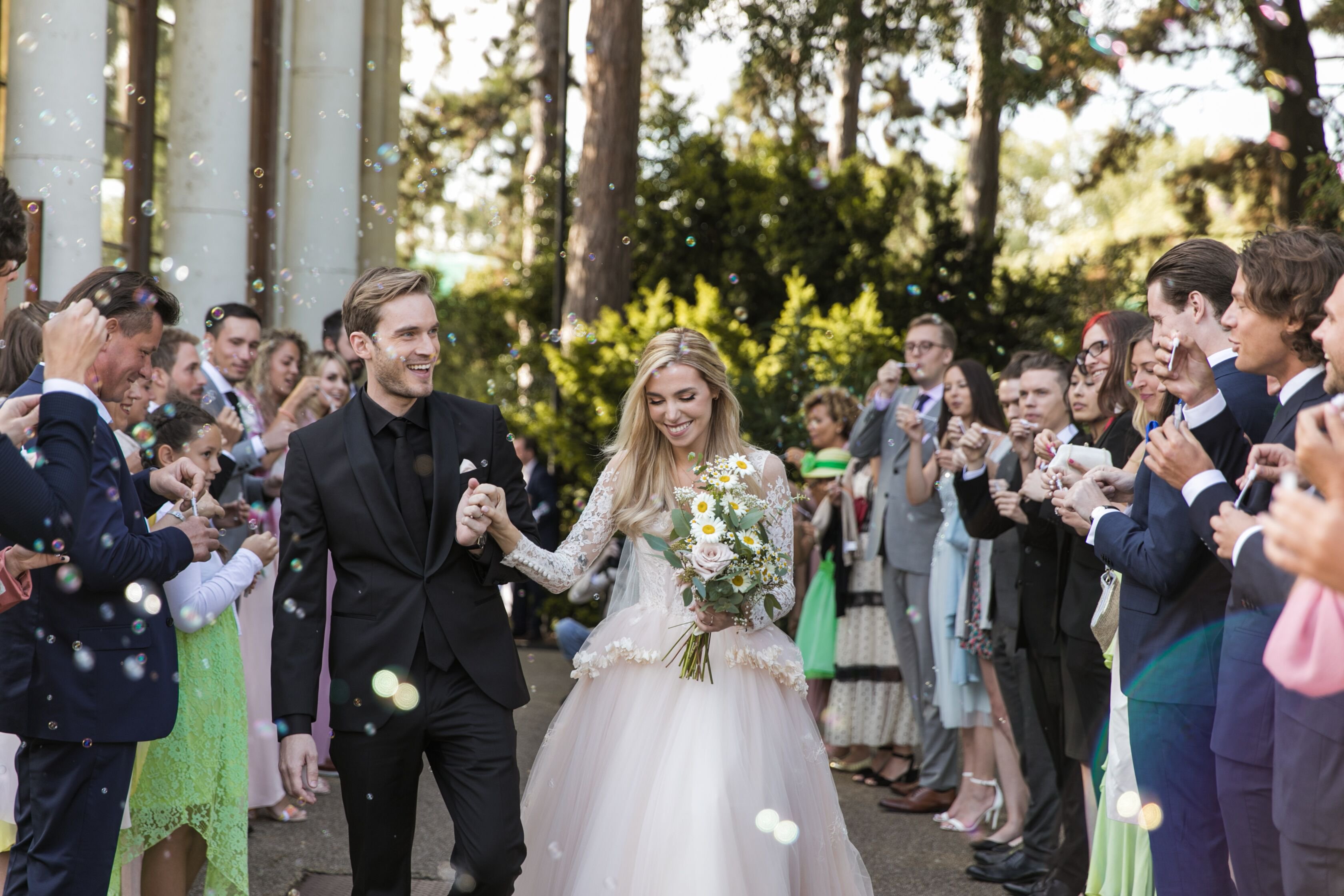 6 DAYS TO #THISBOOKLOVESYOUHave you pre-ordered your copy yet? Link in my bio

PewDiePie had a fairly normal childhood growing up in Gothenburg, Sweden.

His plan was originally to get a degree in industrial economics, but he got bored during his studies and, in 2010, setup his YouTube account while he was a student.
It wasn't long before he'd lost interest in academia altogether and he dropped out — enraging his corporate executive parents.

He soon began creating videos for his channel, and made money on the side flogging art he made on Photoshop and working at a hot dog stand.

Within two years of setting up his YouTube account, he had a million subscribers – and money from ads started rolling in.

"I had no idea that you could make money from gaming," he admitted in one of his blogs.

"A lot of people think it's unfair that I can make so much money by sitting on my a** all day – and it's true.

"But there is so much more to it than that. And money doesn't make you happy. I'm happy I don't have to pay rent – but it doesn't change much.

"It feels like the whole world cares more about how much money I make than I do." 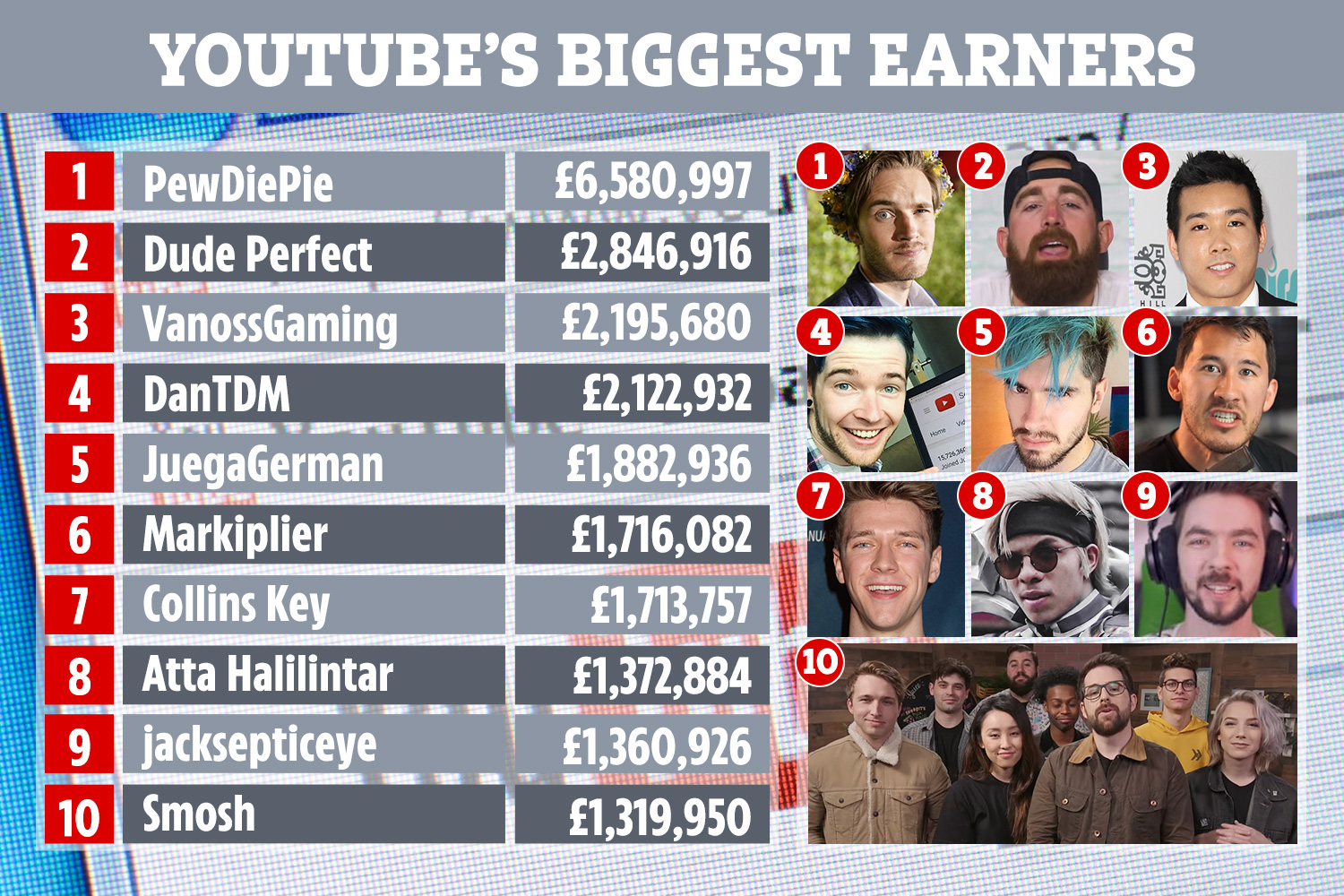 In 2011, Italian YouTuber Marzia slid into PewDiePies's DMs after being sent his videos by her mate.

She told him she thought he was funny, and the pair started messaging.

Twelve weeks later, PewDiePie flew out to Italy to stay with Marzia, and the couple fell in love.

Within weeks, Marzia had quit her studies and moved to Sweden to be with him – but the couple struggled to afford their rent.

But it wasn't long before PewDiePie's channel took off and the couple moved to the UK in 2013 after getting fed up with internet connectivity problems in Sweden.

When the pair got engaged shortly after, he splashed out on an enormous ring, estimated to be worth between £45k-£75k, according to gemologist Alexandra Michell. 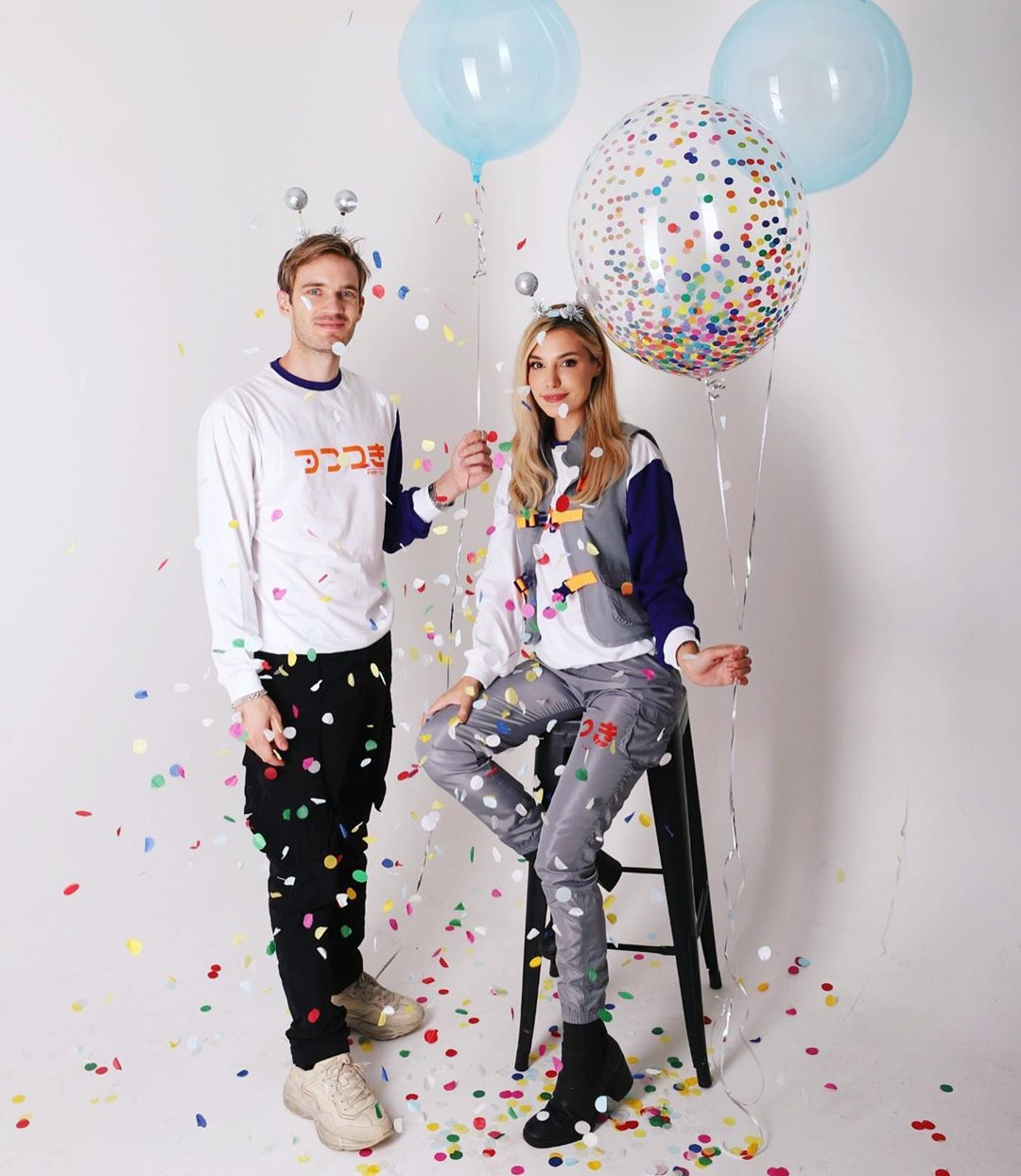 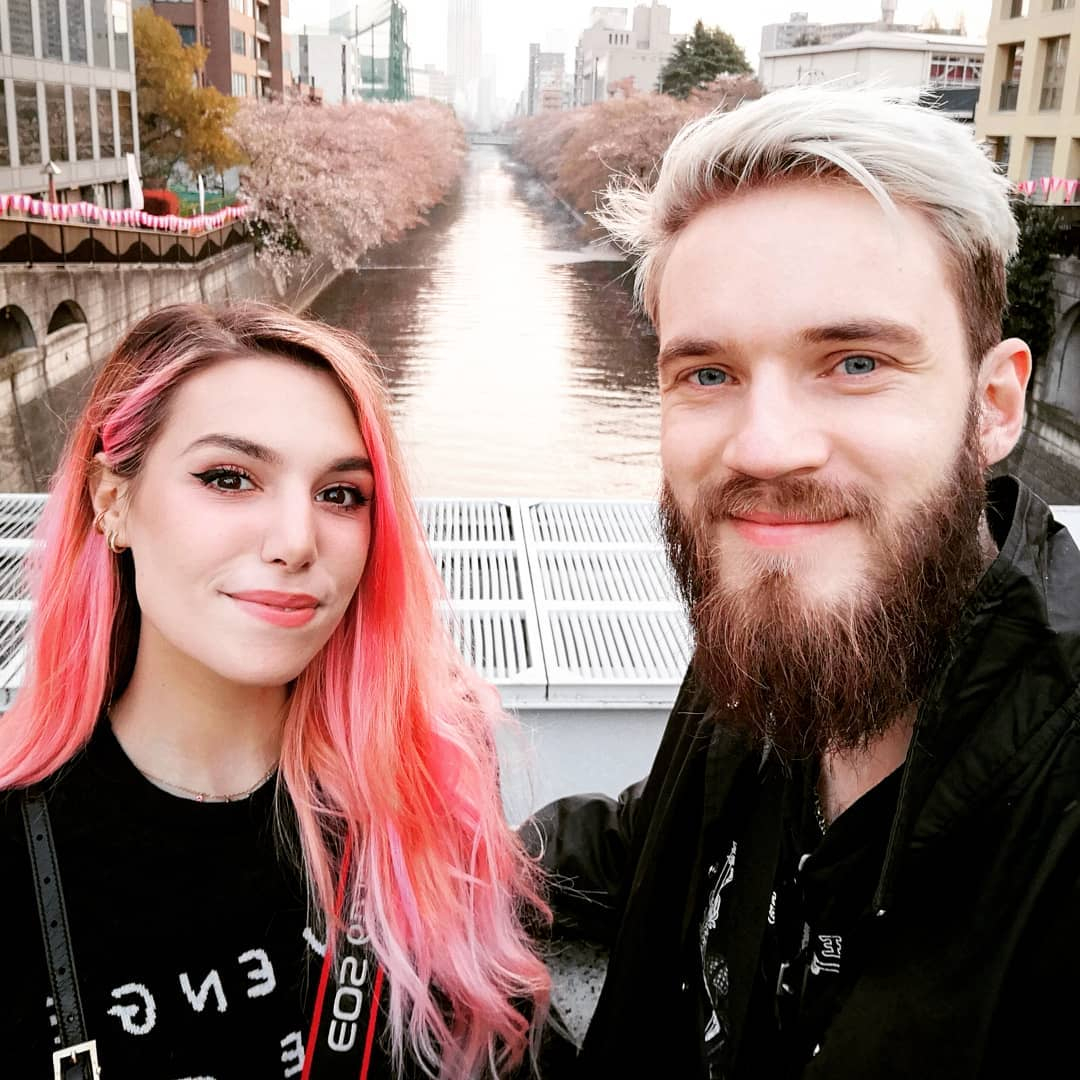 The internet lovebirds set up home in one of Brighton's most prestigious neighbourhoods, splashing out on a plush pad by the sea.

Though they try to keep snaps of the inside of their home off Instagram, glimpses of industrial chic features including brass drop lamps and snow white linen sheets have sneaked into come crops.

One image showed a grand gold mirror hanging above a fireplace, surrounded by plants and candles.

Can't stop buying plants. Running out of space where to put them. I bought the biggest one yet today. And also a lovely tiny lemon tree. ???

The kitchen is finished. The sun is shining. I'm editing a vlog. Today is a pretty good day. ??

Once settled in their pad, the couple got two pet pugs, Puga Chan and Edgar, and a Yorkshire Terrior called Ynk, pronounced 'ink'.

PewDiePie has also been known to spend his money on exotic pets and has a cane toad called Slippy.

When the couple do spend money, it seems clothes are their go-to splurge.

PewDiePie has been seen with a limited edition pair of Adidas trainers worth around £350, and a Perks and Mini bomber jacket costing £516.

He was also pictured sporting a chunky leather pair of Eytys Angel shoes which are currently on the market for a cool £270.

Meanwhile wife Marzia shops at highstreet stores including office and Mango – and has splashed out on a few specific items including a £300 Reiss coat.

“Marzia appears to spend her money on investment pieces, such as classic designer bags, shoes and coats that will go with a variety of different outfit and never go out of style," stylist Samantha Kenwright explains. 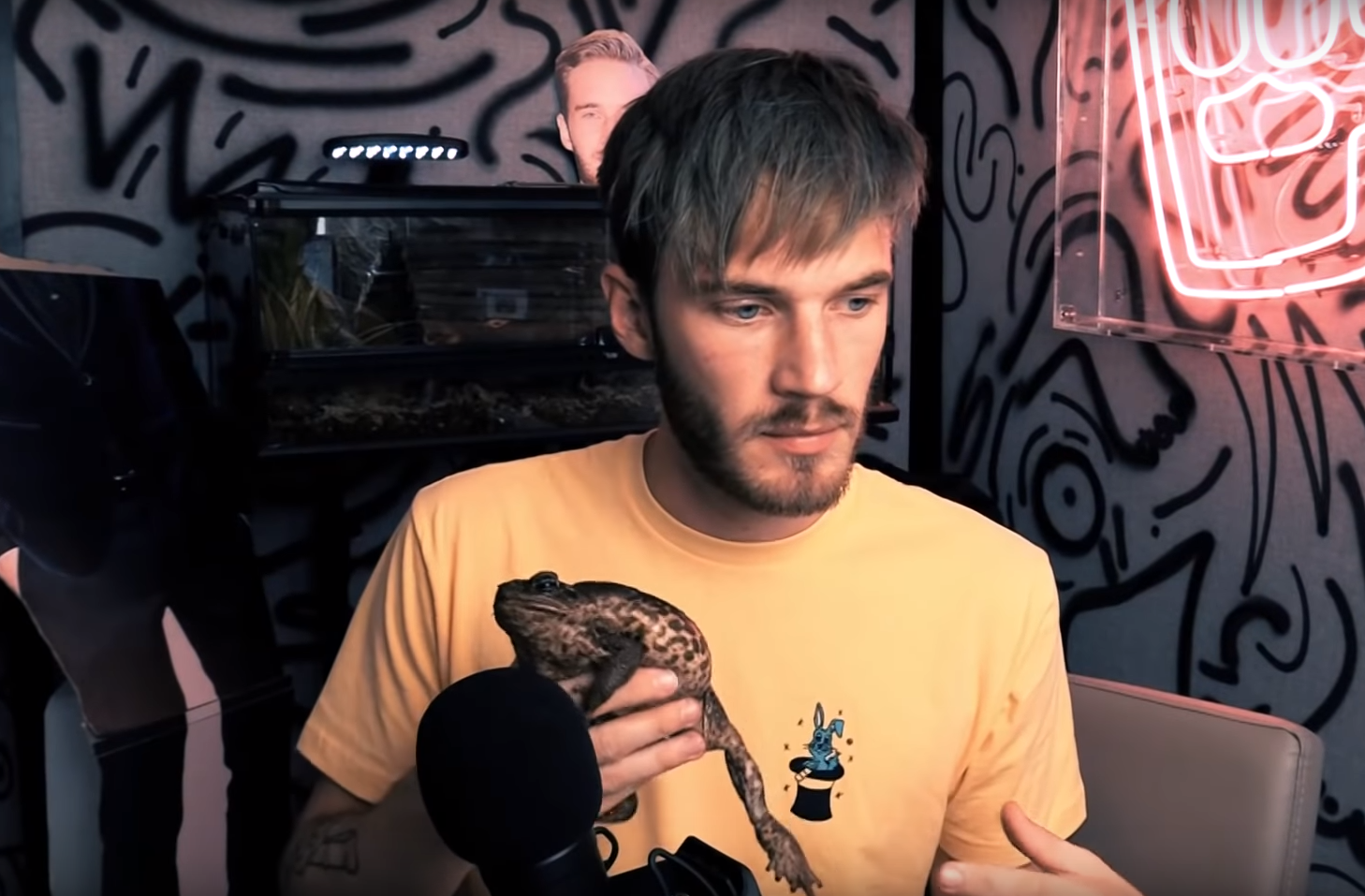 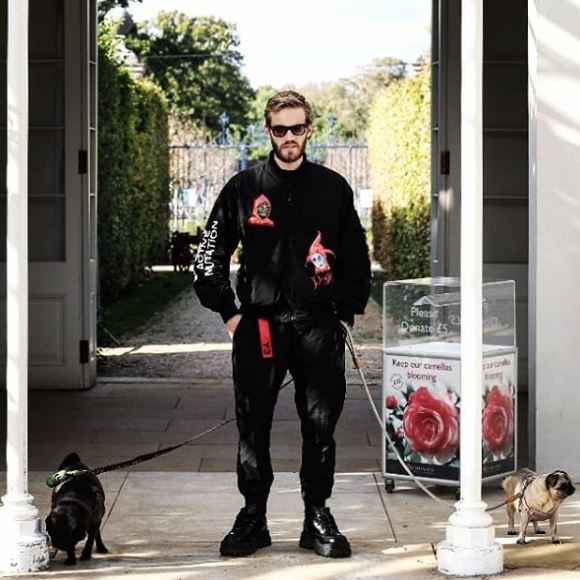 Holidays in Japan, Marrakesh and Italy

PewDiePie and his wife are also big fans of international travel.

In the last few months, the pair have shared pictures various lavish holidays in Japan, Pisa in Marrakesh.

And when away, the couple enjoy trying out the best food around.

While on one trip, PewDiePiew and Marzia tried octopus – something he later admitted he wasn't keen on.

PewDiePie is also a fan of fancy booze, and recently posted a pic of a £67-per-bottle Japanese whisky on his Instagram. 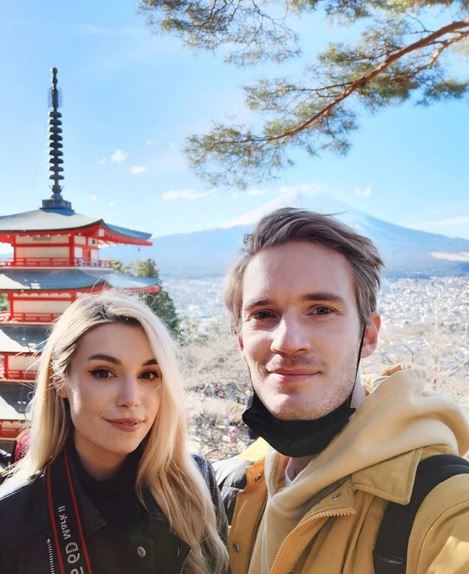 While PewDiePie has spoken out about how he doesn't see the point in flash cars, he is thought to drive a Volvo XC90 which retail at over 50k.

Rare photo of edgar being calm

He once shared a video of himself making a parody 'my new car' video.

“I saw a lot of ‘My New Car’ Vlogs, and I think they’re really entertaining. I think it’s really inspiring how young YouTubers can afford to buy a Lambo, buy a Ferrari, and I feel like now it’s my turn,” he said in the clip.

But his new car was actually an old Nissan…