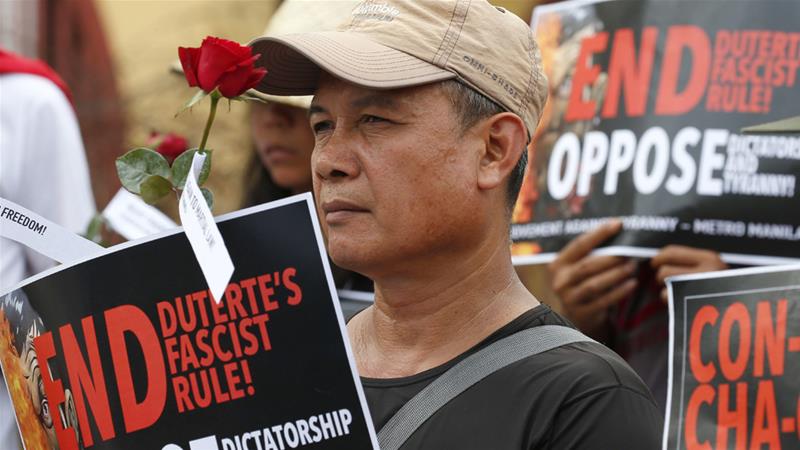 Manila, Philippines – Thirty-two years since it ousted its last dictator, the Philippines faces the possibility of having another one.

As the country commemorated the “People Power” revolution of 1986, more than 1,000 people gathered on Sunday at the event’s memorial to condemn President Rodrigo Duterte whom they called a “dictator” in the making.

“It is important to stand up now, especially since last year, we saw that this administration blatantly disregarded our history, that they buried the dictator Marcos,” said protester Jason Del Rosario. “Now see the same authoritarian tendencies from the current regime.”

In November of 2016, Duterte ordered a clandestine hero’s burial for Ferdinand Marcos. Duterte, who openly idolises Marcos and claims close ties to his family, skipped Sunday’s commemoration as he did last year, leaving only a media statement calling for “unity and solidarity”.

When the non-violent People Power uprising sent Marcos and his family fleeing the country to Hawaii, he had been president for more than 20 years – a regime marred by massive corruption and rampant human rights abuses.

Duterte currently faces accusations of crimes against humanity at the International Criminal Court over his “war” on the illegal drug trade, in which as many as 20,000 people may have been killed in police raids or vigilante shootings.

Duterte is also pushing to amend the 1987 Constitution drafted after the fall of Marcos, and shift the form of government from unitary to federal. As Duterte’s allies at the House of Representatives see it, the transition would reset term limits and have him remain in power, although Duterte himself claimed no intention of staying on.

Last week, Duterte banned journalists from covering him saying he was “hurt” by their news organisation’s reports that criticised him or his aides. Although the move was unprecedented, it followed a series of verbal and legal attacks on reporters.

When protesters chanted slogans and sang anthems from the 1986 revolt on Sunday, it was with both nostalgia and urgency.

“It’s like we have lost our liberty because the one in power wants federalism, which to me is just a ploy to bring back the dictatorship,” said Maria Luisa Salandanan as she clutched her group’s banner. “Everything that we fought for back in the day is now under threat.”

“We are standing up against the killings sponsored by this administration. Second, we protest the unjust detention of personalities like Senator Leila De Lima. We also support Chief Justice Maria Lourdes Sereno,” added Marybelle Mendegoria, listing the president’s political nemeses.

De Lima is in jail on drug trafficking charges; Sereno faces an impeachment complaint for alleged corruption. They both criticised Duterte’s policies before running into legal troubles.

Duterte is also at odds with the Office of the Ombudsman, led by his in-law Conchita Carpio Morales, which has initiated an investigation of his family’s undisclosed wealth.

Despite everything Duterte is accused of, he enjoys a comfortably positive approval rating based on recent opinion polls. Every point of criticism appears only to affirm his iconoclastic image, further endearing him to his supporters.

A political dark horse, Duterte built his campaign on people’s widespread frustration with the government, which has erstwhile been led mostly by traditional politicians from elite clans.

Foremost among those political clans was the Aquino family, whose place in Filipinos’ imagination was sealed by the People Power revolt.

Duterte’s affinity for the Marcoses and disdain for the “elites” personified by the Aquinos explains his tepid view of the People Power revolution.

It was a jab at the Liberal Party, frontlined by the Aquinos, which used the imagery and symbolism of the People Power revolution in their succeeding political campaigns. For instance: the colour yellow.

In 1983, to welcome him from exile, Ninoy Aquino’s supporters put up yellow emblems along his path from the airport, where he was shot dead as he disembarked from his plane. Since then, Cory Aquino often wore yellow in public. Yellow then became the Liberal Party’s campaign colour.

Nowadays, the term “dilawan”, which means “yellowed”, is used disparagingly by Duterte’s supporters to refer to the Aquinos, members of the Liberal Party, and their supporters. Consequently, the People Power revolt has come to be associated with “the yellows”.

“That’s our problem. We focus on individuals,” said political analyst Dindo Manhit, president of Stratbase ADR Institute, a think-tank based in Manila.

“That’s why it’s called the ‘People Power Revolution’. It has nothing to do with Cory Aquino. And I blame individuals, who are too allied with Cory Aquino, who simplify it that way. She was an icon of democratic change but we have to remember, it was the people’s revolution. People stood up. She benefited from it,” he added.

Manhit pointed out the Philippines lacks a genuine political party system. The country’s so-called political parties are built around personalities, not ideologies. And although regular elections give the public a chance at determining the leadership, their political participation mostly ends at the poll precinct.

“So all these things, it’s also a failure of our institutions. And why have they failed? Because we have allowed them to be hijacked by political leaders. And the nature of political leadership is you are driven by your own political purposes or ambitions,” said Manhit.

Filipinos tend to gloss over their history, Manhit said, and so they tend to run into the same problems.

“It’s the people’s fault also. Why do we hinge our future always on somebody who will save the day for us? That means one person. Was it a Cory Aquino? Was it a Noynoy?” asked Manhit.

But if anything, the Philippines current political climate is making up-and-coming politicians regroup and rethink.

Senator Paolo Benigno “Bam” Aquino – nephew to Ninoy and cousin to Noynoy – continues to “channel” his forebears: black-rimmed square eyeglasses and hairstyle reminiscent of his uncle, and loyalty to the Liberal Party when many others have jumped-ship.

He told Al Jazeera while People Power delivered on the promise of restoring democracy, it failed in another. “The other promise was not fulfilled, and that was the economic side: social justice, equality, more opportunities for our countrymen – that one was not fulfilled.”

It’s what drove people to look for a maverick leader such as Duterte.

But for an Aquino like himself, the senator said there is only one thing left to do.

“It’s pretty clear to me. You do what you think is right. In 1986, they didn’t know that they would win,” said Aquino, referring to his aunt Cory and her allies.

“When they faced the military tanks, they didn’t know that they wouldn’t die. So … for many of us who are in power and in critical positions, we need to do what we know and what we think is right, no matter what the consequences are, politically or socially or electorally.”

For Manhit, though, the best testament to the effect of the People Power Revolution is Duterte himself.

“One thing to remind the president is, he became mayor of Davao because of People Power. People should also remember that the leader of the anti-Marcos movement in Davao was the mother of Mr Duterte,” Manhit said.

“I believe we have political growth at the national level because we keep on electing new faces. If there’s no political growth, do you think Duterte will be president? That somebody from the outside can win?” 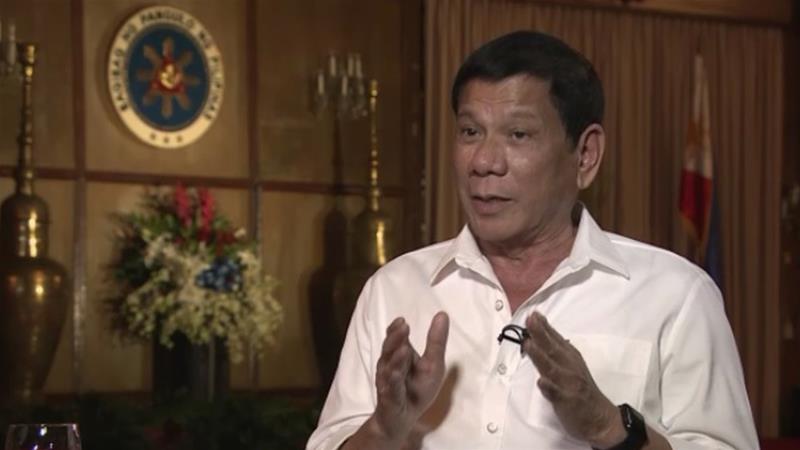