Pictured: Churchgoer, 26, who was shot dead by hooded gunman

Pictured: Churchgoer, 26, known as Gucci for his love of the fashion label who was shot dead by hooded gunman on the doorstep of his £500,000 London home

This is a picture of a churchgoer, 26, known as Gucci for his love of the fashion label, who was shot dead by a hooded gunman on the doorstep of his £500,000 London home.

Jeffrey Wegbe was shot in the chest on Wednesday at the property where his mother and teenage sister are also thought to live, according to local sources.

The young man was a well-known figure in the community and had lived in the Kilburn area in north west London for most of his life.

He belonged to a religious family and was the youngest brother of Nathaniel Wegbe, a history teacher and Head of Year 11 at Paddington Academy. 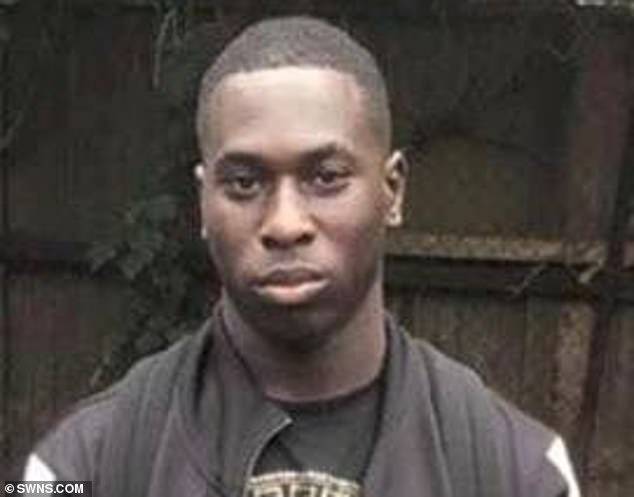 Jeffrey Wegbe, pictured, 26, was shot dead at his home where his sister and mother are thought to live in the Kilburn, north west London, on Wednesday. There have been no arrests

Shortly after the shooting, a neighbour saw one of his brothers arrive at the property demanding police let him pass.

The young man, who requested to remain anonymous, said: ‘The brother turned up in a silver BMW about 20 minutes after the police, trying to see what had happened.

‘Officers were holding him back because it was a crime scene. He kept saying he wanted to go inside. He said ‘I’m his brother’ and then shouted ‘f**k’ really loudly.’

A large blue forensics tent was erected outside the victim’s house and police cordons blocked the entrance to the estate.

One of Gucci’s childhood friends broke down in tears as she laid flowers at the murder scene.

The 23-year-old, who did not want to be named, said: ‘He was the funniest person ever.

‘He sold his passport at school just to make money and he officially changed his name to Gucci, his favourite brand.

‘People knew him for his character. When he smiled it was so bright because his teeth were as white as Simon Cowell’s. And that smile was on 24/7.’ 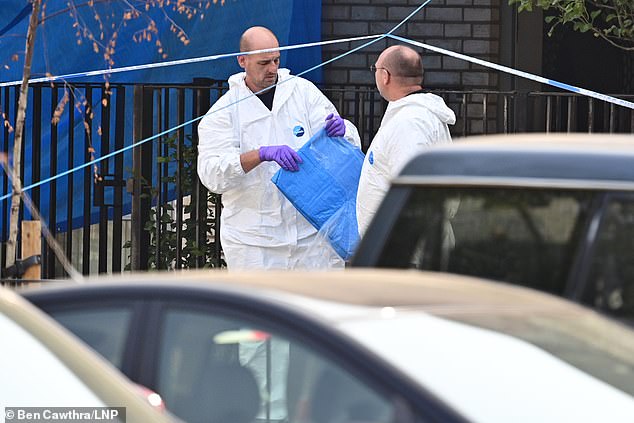 Police forensics work at the scene in Kilburn, north west London on Wednesday following the shooting in the early hours of the morning. The attack has left the estate’s residents in fear

The distraught friend was shocked that, among all her friends in the area, Gucci had been killed.

She said: ‘He was the last person who you’d think would die young. He was a good boy from a good family of devout Christians. Every Sunday he would drive his family to church.

The young woman added: ‘His middle brother looks exactly like Gucci so his mum will be able to remember him.’

Gucci had one sister and two older brothers, the eldest of whom is a teacher at a nearby school, according to a local source,

The source, who did not wish to be named, said: ‘His brother Nathaniel Wegbe teaches history at Paddington Academy. He is a role model and has changed thousands of lives for the better. 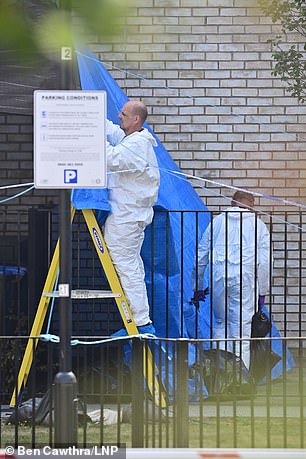 Police forensic officers work at the cordoned-off scene on Wednesday

He added: ‘He was very professional, but we would joke with him about his brothers. We thought they were involved in dodgy stuff, but he would just brush it off.’

Nathaniel Wegbe, who studied at the prestigious Institute of Education at University College London, is head of year 11 and Key Stage Four at Paddington Academy, according to the school’s website.

Neighbours reported hearing a burst of up to seven gunshots followed by the screeching of tyres shortly on Wednesday morning.

One eyewitness said he saw the flash of the final round and two young men dressed in black hoodies at the victim’s front door.

The pair sped off from the estate in a dark-coloured car driven by a third person, who had been waiting with the headlights on, the neighbour added.

Another neighbour was sitting on the sofa when he heard several shots from his flat which faces onto the murder scene.

The father-of-four, who requested not to be named, said: ‘I looked out of the window and saw the two guys.. They were wearing hoodies and dressed in black. The car was black or blue.. The final shot was after a while. As soon as I heard the shot I saw the flash.

‘They were in no massive rush to leave. The two guys got into the car and there was a driver waiting. They drove off on Kilburn Park Road. There’s only one entrance and exit to the estate.’

Armed police and paramedics attended but the young man died of a gunshot wound, police said.

The 26-year-old’s family said: ‘Our beloved Jeffrey was killed on Wednesday morning in what can only be described as a senseless violent attack. 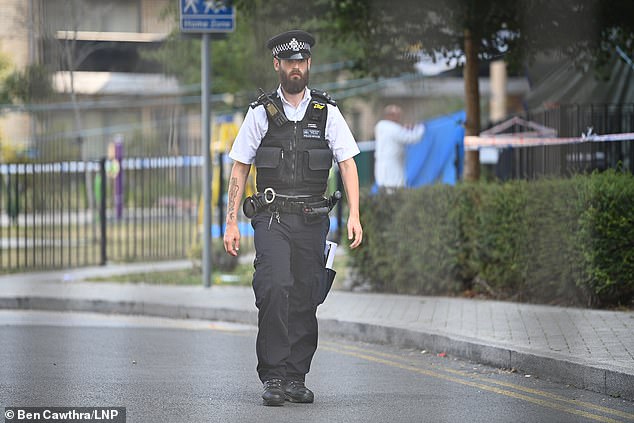 A police officer at the address in Kilburn on Wednesday. Neighbours reported hearing a burst of up to seven gunshots followed by the screeching of tyres

‘Understandably, we are distraught by the news and ask that you keep us all in your thoughts and prayers.

‘We would also like to say a huge thank you to the family, police and wider community for all their support.’

Met Police’s Chief Superintendent Roy Smith, said: ‘Firstly my thoughts are with the victim’s family and loved ones and I know colleagues will be working hard to support them.

He added: ‘Officers from every part of the Met are out on our streets using every tactic available to stop mindless violence like this. I am incredibly proud of and grateful to colleagues from both the Met and London Ambulance Service who rushed towards danger to try and save this young man’s life – as they would do for any one of us.’

The brutal attack has left the estate’s shocked residents in fear, and calling for CCTV cameras and a greater police presence.

One neighbour said: ‘I have had to put up my own security cameras because there aren’t any here. You never see police around either. This is a new estate, you would think they want to protect it.’