PIERS MORGAN: Beware President Biden – if you go woke, you’ll go broke, as your self-imploding liberal friends across the pond in Britain are proving

A few days ago, America’s most famous trans woman Caitlyn Jenner was stopped in a Malibu parking lot by TMZ and asked what she thought of the debate over whether people like her should be allowed to compete against girls in school sport.

She thought carefully for a few seconds and then replied: ‘This is a question of fairness, that’s why I oppose biological boys who are trans competing in girls’ sports in school. It just isn’t fair, and we have to protect girls’ sports in our schools.’

Now, you might think Jenner is particularly well qualified to speak about this subject given that before she transitioned, she competed as a male decathlete back in the ’70s and won an Olympic gold medal.

That, after all, is why sport divides men and women from competing against each other in anything where power, strength and speed is a factor: because it would self-evidently be unfair.

I imagine that the vast majority of Americans would agree with Caitlyn Jenner.

But they wouldn’t include woke activists like Sarah Silverman.

In an extraordinary outburst, the gobby liberal comedienne Sarah Silverman launched a vicious attack on Jenner, who is running as California gubernatorial candidate, for her comments. 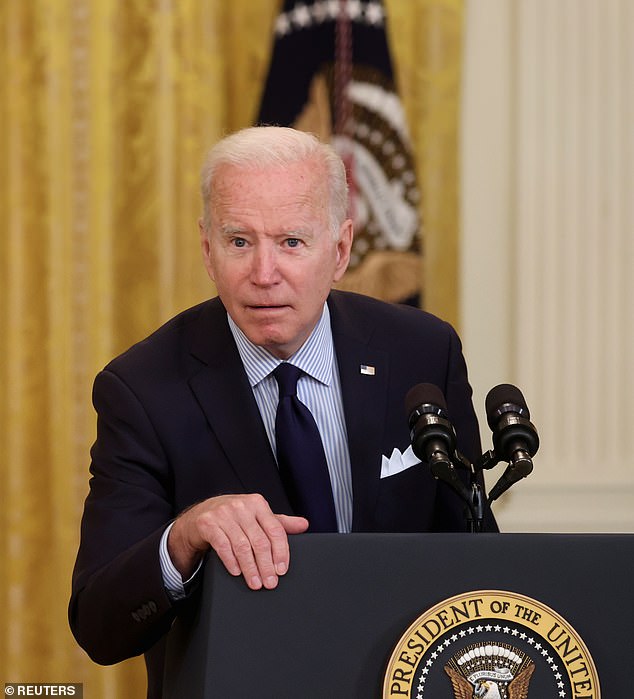 U.S. President Joe Biden gestures as he delivers remarks on the April jobs report from the East Room of the White House in Washington last week

‘Caitlyn,’ she raged, ‘you’re a woman, right? A trans girl is a girl. She should have the same rights as cis girls. This is not worrying. This is not concern for girls’ sports. It’s transphobia, full stop. It’s such a bummer when such a prominent trans woman is such a t***.’

Then she sneered: ‘You know, it’s like being Jewish right now and having the most recognizable Jewish names be Weinstein and Epstein.’

I read all this with mounting anger.

A non-trans woman was savagely berating a trans woman for being transphobic and comparing her to two of the world’s notorious sex abusers, because the trans woman had the audacity to defend women’s rights against demonstrable inequality presented by trans women athletes.

Yet I wasn’t remotely shocked by Silverman’s vile rant.

This is how the unhinged horribly intransigent woke brigade behaves to anyone who dares stand up to their extreme worldview, and facts never come into it.

But it’s why liberal parties around the world have been losing their grip on power, because most people in the real world, away from the shrieking echo chambers of social media, increasingly loathe the woke and cancel culture mentality.

Caitlyn Jenner was stopped in a Malibu parking lot by TMZ and asked what she thought of the debate over whether people like her should be allowed to compete against girls in school sport. She said: ‘This is a question of fairness, that’s why I oppose biological boys who are trans competing in girls’ sports in school. It just isn’t fair, and we have to protect girls’ sports in our schools.’ Jenner is pictured speaking to Sean Hannity on Wednesday night

And it’s also why Joe Biden should be very, very careful which way he takes his Democrat party in the next three years if he wants to stand any chance of re-election in 2024.

To understand the danger, Biden need look no further than to what’s happening to the equivalent of the Democratic Party in his closest ally, Britain.

The Labour Party, which dominated for a decade from 1997-2007 under three-term winner Tony Blair, is currently disintegrating to the point where many members fear it’s making itself permanently unelectable.

The situation is so bad that Labour’s current leader Sir Keir Starmer is already facing calls to quit after being in the job for just a year, following a disastrous performance in last week’s UK local elections, the nearest equivalent to the US mid-terms.

Labour’s capitulation was so bad it even lost control of the northern town of Hartlepool, a place it has held since it was formed in 1974. 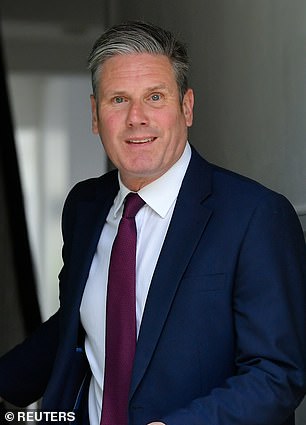 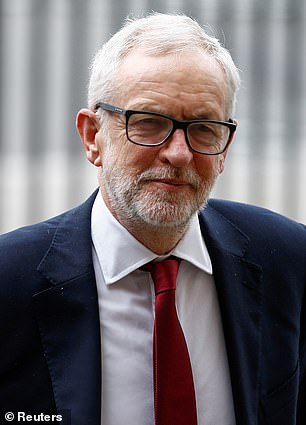 This would be like the Democrats losing New York or the Republicans losing Utah.

How did this electoral earthquake happen?

Labour, like the Democrats, has allowed its agenda to be dictated by an army of woke warriors dripping in demented self-righteous virtue-signalling.

The rot set in back in 2015, when, in a moment of political insanity, Labour elected as its leader a man named Jeremy Corbyn who is so far left that he makes Biden look right of Mitch McConnell.

Corbyn – think Alexandria Ocasio-Cortez with a beard – dragged the party down into an obsessive abyss of identity politics fuelled by race, gender and sexuality that decimated Labour’s support.

By incessantly preaching woke ideology, and speaking in unintelligible woke language, Labour enraged its legendary ‘Red Wall’ of voters in the once committed northern heartlands like Hartlepool to the point that the wall collapsed – and Labour voters ran fleeing into the shameless arms of Conservative populist opportunist Boris Johnson.

Johnson, who became UK Prime Minister in December 2019, is Trump-light.

He’s not as right wing, or as dangerous.

But like Trump, he’s a big, blond bullsh*tting braggart with a penchant for lying and lurid personal conduct who knows how to cut through normal robotic political rhetoric to speak to the electorate in a way many of them understand and like – and is adept at exploiting woke culture wars to his own political benefit.

Fortunately for him, his opponents kept feeding those wars with ever more ludicrous woke campaigns, which is why Johnson’s now riding high in the opinion polls despite his Government’s horrendous Trump-like oversight of the covid crisis.

So, Biden and the Democrats should be under no illusion about what will happen to them in 2024 if they continue to allow wokery to consume the party in the way they have been doing.

In an NPR/PBS poll conducted after the 2018 US midterm elections, a clear majority of people (52%) said they were ‘against the country becoming more politically correct and upset that there are too many things people can’t say anymore.’ Just 36% said that they were ‘in favor of the United States becoming more politically correct and like when people are being more sensitive in their comments about others.’

Yet despite this, Democrats have persisted in swallowing the woke pills in a way that alarms some of their most high-profile strategic operatives like James Carville.

‘Wokeness is a problem, and we all know it,’ he told VOX two weeks ago. 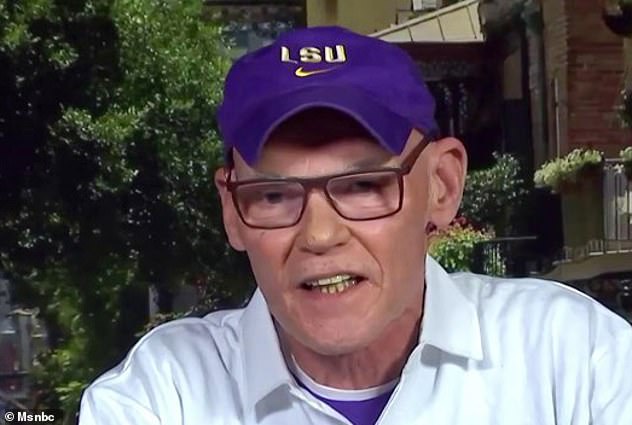 James Carville, who’s famous for the line ‘It’s the economy, stupid’ during Bill Clinton’s presidential campaign, told VOX.com that ‘Wokeness is a problem’ for the Democratic party. He’s pictured here speaking to MSNBC in February 2020

Carville pointed out that the Democrats only narrowly defeated ‘world-historical buffoon’ Trump by just 42,000 votes, and they lost congressional seats and failed to pick up state legislatures.

He’s right to remind liberals of this uncomfortable fact as they currently bask in the comfort of a supine liberal-dominated media and successful vaccine roll-out.

If it hadn’t been for the life-and-economy-crushing pandemic, and Trump’s woeful handling of it, I think Biden would have been easily defeated by someone now widely considered to be the worst president in America’s history.

As it was, ten million more Americans voted for Trump in 2020 than 2016, and Carville blames woke nonsense for this extraordinary state of affairs.

‘You ever get the sense that people in faculty lounges in fancy colleges use a different language than ordinary people?’ he said. ‘They come up with a word like ‘Latinx’ that no one else uses. Or they use a phrase like ‘communities of color.’ I don’t know anyone who speaks like that. I don’t know anyone who lives in a ‘community of color.’ I know lots of white and Black and brown people and they all live in … neighborhoods. There’s nothing inherently wrong with these phrases. But this is not how people talk. This is not how voters talk. And doing it anyway is a signal that you’re talking one language and the people you want to vote for you are speaking another language. This ‘too cool for school’ sh*t doesn’t work, and we have to stop it. There may be a group within the Democratic Party that likes this, but it ain’t the majority.’

To compound the malaise, Carville said that many of his liberal friends agree wokery is a big problem but are too scared to admit it in public.

‘It’s hard to talk to anybody today who doesn’t say this,’ he said. ‘But they don’t want to say it out loud. Because they’ll get clobbered or canceled.’

He added: ‘Large parts of the country view us as an urban, coastal, arrogant party and it’s damaging to the party brand. And maybe tweeting that we should abolish the police isn’t the smartest thing to do because almost nobody f*cking wants to do that.’

And Britain’s Labour Party, also viewed as an urban arrogant party that wants to do and spew endless dumb woke things, is proof that this kind of image and message doesn’t work with voters.

The biggest threat to the Democrats is no longer Donald Trump, it’s themselves.

And the biggest threat to Biden’s re-election in 2024 isn’t Trump running again, it’s a more reasonable, less incendiary, but equally populist freedom-loving Conservative candidate like Boris Johnson who shares Trump’s loathing of wokery and knows how to ruthlessly exploit it.

This could be a particularly perilous threat given Biden’s recent enormous $6 trillion spending spree which is already showing signs of triggering damaging inflation with higher prices being foisted onto consumers.

If the US economy is stuttering come November 2024, and Americans have been subjected to four years of woke madness like letting trans women destroy women’s sport, then Biden will be a one-term president.

Wake up to woke, Joe!