Piers Morgan today cleared out his office at Good Morning Britain as he said a final goodbye to the programme after five years.

The breakfast host shared an image of cardboard boxes alongside a life size cut-out of Susanna Reid, writing on Twitter: ‘Goodbye, Good Morning Britain! (I think I’ll leave the cardboard cut-out, would be a bit creepy to take that home…’

His co-host Reid replied: ‘End of an era. Thank you for five incredible years of rows, rants & reasons to eye-roll.’

Piers left the show after he cast doubts on remarks the Duchess of Sussex made during her interview with Oprah Winfrey, in which she talked of suicidal thoughts.

He has resolutely stood by his comments and said his departure from GMB was caused by the ‘cancel culture that is permeating our country’. 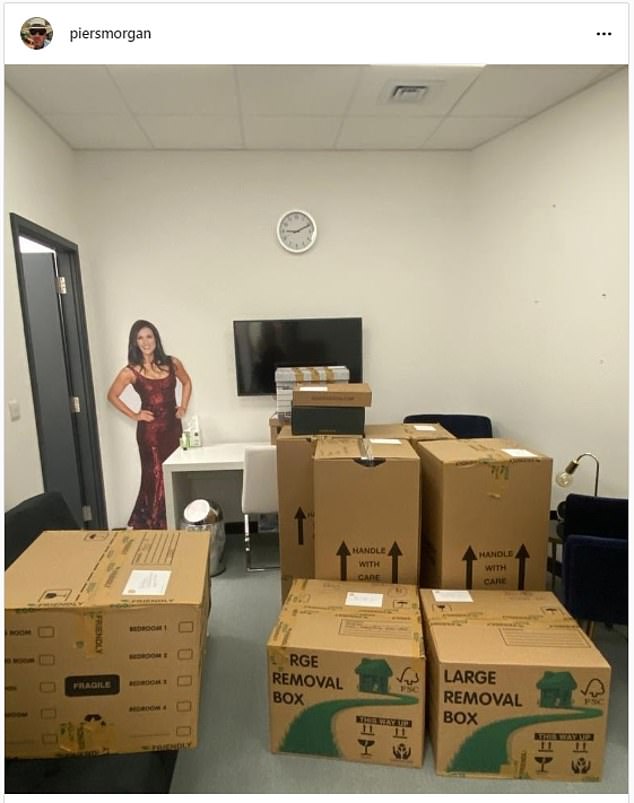 All three have garnered hundreds of thousands of signatures since Piers walked out.

Hundreds of thousands of fans have called for Piers to come back to the breakfast show in the wake of his dramatic departure earlier this month.

There has been a groundswell of support, with at least five web pages set up to get the star presenter back on ITV’s flagship breakfast programme.

Petitions to get Piers reinstated on Good Morning Britain have surpassed 360,000 signatures.

Piers responded to the soaring petitions on Twitter, writing that although the support came as a ‘pleasant surprise’ he will not be returning to GMB.

On his last day, GMB scored its highest ever ratings, with some 1.29million viewers.

It was the first time the ITV broadcast had beaten its long-time rival BBC Breakfast, which had 1.25million.

That episode of GMB turned out to be Morgan’s final programme before he quit the show after claiming he didn’t ‘believe a word’ Meghan Markle said during her Oprah Winfrey interview, first broadcast on CBS on March 7.

Piers had earlier clashed with weatherman Alex Beresford and stormed out of the studio after being challenged over his position.

Hours later Mr Morgan quit, with his supporters defending his views and claiming his exit was bad news for free speech and a sad indictment of cancel culture in Britain.

Others have questioned whether GMB’s viewing figures will hold-up without its star, who helped add a million new viewers in his time on the show.

Only 840,000 tuned in last Thursday, compared to 1.49million on the rival channel – after the programme lost almost 40 per cent of its audience when Mr Morgan quit. 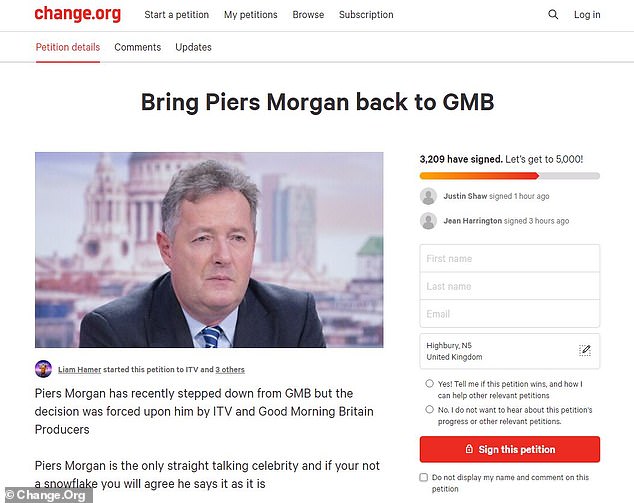 Thursday’s broadcast of the ITV morning show did pull in more viewers its 800,000 audience on Wednesday, which had been GMB’s lowest-recorded show by ratings service Overnights.TV over the last four weeks.

The programme, hosted by Kate Garaway and Susanna Reid, would not normally feature Piers, who was the regular host on Mondays to Wednesdays.

He acknowledged the achievement today, Tweeting: ‘My Life Stories show with Coleen Nolan was the highest-rated of this series & won the 9pm slot by miles. Thanks for watching!’