Pippa Knight: Battle to keep her alive is taken to European judges

Paula Parfitt, 41, lost three legal battles in the UK as she tried to prevent doctors from switching off her daughter Pippa Knight’s life support at the Evelina Children’s Hospital in London.

Ms Parfitt, from Strood in Kent, has made a written application to the European Court of Human Rights in Strasbourg, France, and is waiting for a ruling.

Ms Parfitt said she did not know if she would be granted a hearing but wanted to do everything she could for her daughter. ‘I might win,’ she added.

An ECHR spokesman said on Wednesday Ms Parfitt’s application would be ‘considered in due course’ and an ‘interim measure’ had been granted to ‘stay the withdrawal of treatment’.

Doctors want to stop treating Pippa, who is in a vegetative state after suffering from Acute Necrotising Encephalopathy –  a childhood disease which causes a respiratory or gastrointestinal infection and high fever, rapid alteration of consciousness and seizures.

A High Court judge based in London has ruled they can lawfully stop providing life support treatment to allow Pippa to die. 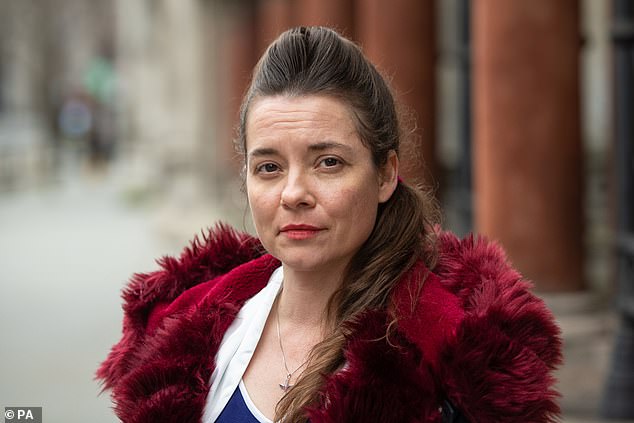 Paula Parfitt (pictured in January), 41, lost three legal battles in the UK as she tried to prevent doctors from switching off her daughter Pippa Knight’s life support at the Evelina Children’s Hospital in London 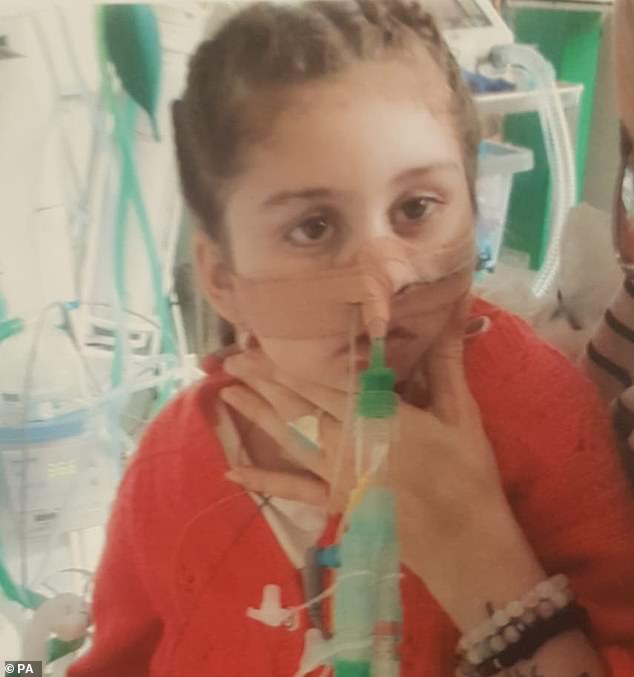 Doctors want to stop treating Pippa (pictured), who is in a vegetative state, and a High Court judge based in London has ruled they can lawfully stop providing life support treatment to allow Pippa to die

Judges in the Court of Appeal and Supreme Court have refused to overturn that decision by Mr Justice Poole.

She said the decisions by Mr Justice Poole, plus the Court of Appeal and Supreme Court judges, left her devastated.

Mr Justice Poole heard evidence at a trial in the Family Division of the High Court in London in December, and delivered a ruling in January.

The judge, who heard that Pippa’s father is dead, described the case as ‘heart-rending’.

Pippa was born on April 20, 2015, and had initially developed normally, but in December 2016 she became unwell and began to suffer seizures, the judge heard. 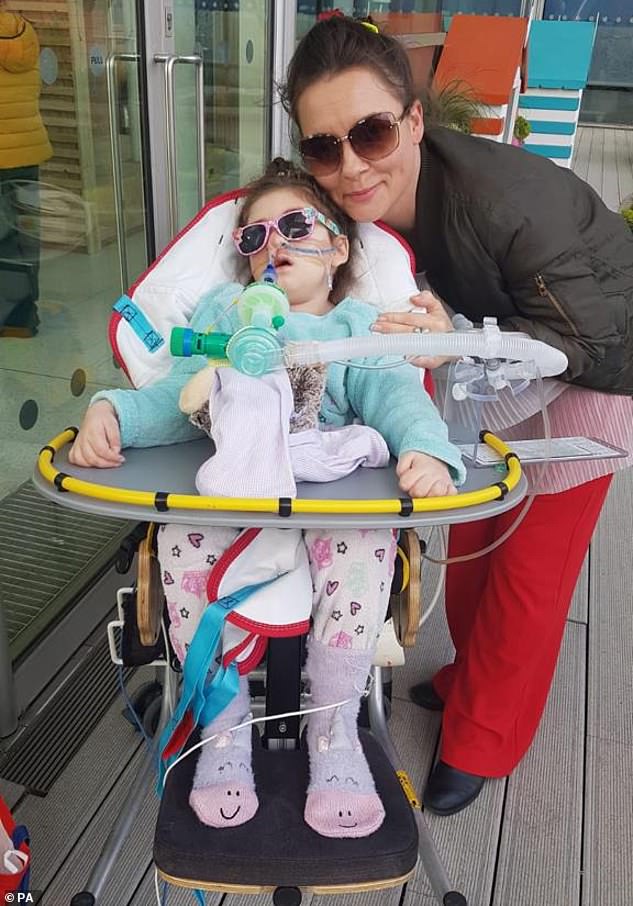 Ms Parfitt, from Strood, Kent, wanted daughter Pippa (pictured together during a walk outside the hospital) to leave hospital for specialists to stage a homecare trial

In March, Ms Parfitt revealed she was able to bring Pippa for walks outside the hospital attached to a portable ventilator.

She said she would not have thought such walks would be possible a few weeks ago but it ‘shows people what is possible’.

‘A few weeks ago I didn’t think these walks would be taking place at all,’ said Ms Parfitt, who is being backed by campaign group the Society for the Protection of Unborn Children.

‘We’ve been out three times in the last week with a portable ventilator.’

She suggested that a similar arrangement might make it possible for Pippa to live at home and added: ‘A more modern ventilator which I would have at home would be even better and offer Pippa even more movement and help her even more.’

A barrister representing Ms Parfitt had told appeal judges that independent experts based at other children’s hospitals thought a home-care trial was in Pippa’s best interests.

Vikram Sachdeva QC said other hospitals might have agreed to a home-care trial. 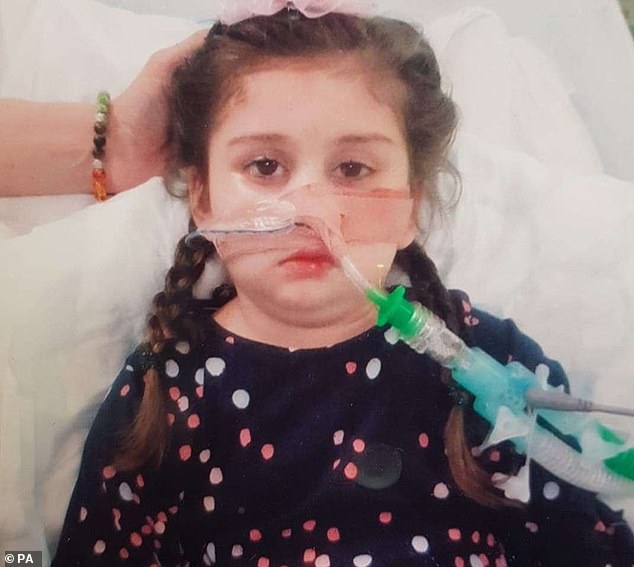 Doctors treating Pippa, who is in a vegetative state at the Evelina Children’s Hospital in London, said life-support treatment should end

Pippa was born in 2015 and developed normally, but in December 2016 she became unwell and began to suffer seizures and a court has heard she is now unaware of her surroundings

Mr Sachdeva said Pippa was not suffering pain and there was ‘genuine scope for debate’ about what was in her best interests.

He added that Pippa would not live for a long time, possibly months, and Ms Parfitt wanted her to die at home.

Mr Justice Poole heard evidence at a trial in the Family Division of the High Court in London in December, and delivered a ruling in January.

The judge said the youngster had no awareness of her environment.

He said he could not ‘give weight’ to Ms Parfitt’s view that home care would improve Pippa’s condition.

The judge said that view was ‘at odds’ with the unanimous opinion of the clinicians and medical experts.

Ms Parfitt, said after his ruling: ‘I don’t understand why the hospital and the court wouldn’t let me find out whether Pippa could come home to be cared for with all her family around her, when two independent doctors from reputable hospitals in England both said that they thought this was worth trying.’

Acute Necrotising Encephalopathy: What is the childhood disease that causes infection, seizures and altered states of consciousness?

Children diagnosed with Acute Necrotizing Encephalopathy (ANE) are born healthy and begin to develop normally before the illness strikes.

ANE is characterised by brain damage that follows a viral infection.

Symptoms of the infection, which includes fever, are followed by seizures, disturbance of consciousness that can develop into a coma, liver problems and neurological defects.

It is almost exclusively seen in East Asian infants and children who had previously been completely healthy.

Brain scans reveal the disease causes damage to various parts of the vital organ – which can lead to losses of consciousness.

There is no treatment or way to prevent the illness and less than 10 per cent of patients are able to completely recover.

It can be caused by mutations in the RANBP2 gene passed down from parents, or can be sporadic – meaning there is no known cause.