A planning probe has been launched into a controversial row of recently extended beach huts that have divided both locals and tourists in a popular seaside spot.

The company that run the classic wooden beach huts added almost 6ft to the length of some properties, prompting fear from residents in Christchurch, Dorset that they were taking over the public promenade.

Avon Beach Ltd had asked for retrospective planning permission for the 37 longer huts and permission to extend another 41 huts at Avon Beach in the tourist hotspot – in some cases narrowing the width of the promenade by more than a metre.

The application received 99 letters of objection, but there were also 110 people supporting the plan, including tourists who use the huts from as far as London, Essex, Kent and Leicestershire.

Some objectors said the company had only contributed so it could extend its beach huts. Avon Beach Ltd’s retrospective planning application has since been denied by Bournemouth, Christchurch and Poole Council, prompting an enforcement probe.

Those objecting accused the restaurant owners of ‘ruining’ the beach by making the promenade too narrow and said they had turned a beach cafe into an ’emporium’ through a drip feed of planning applications. 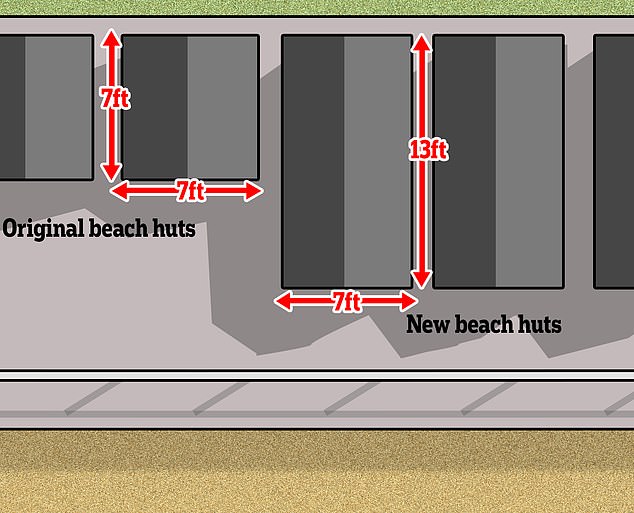 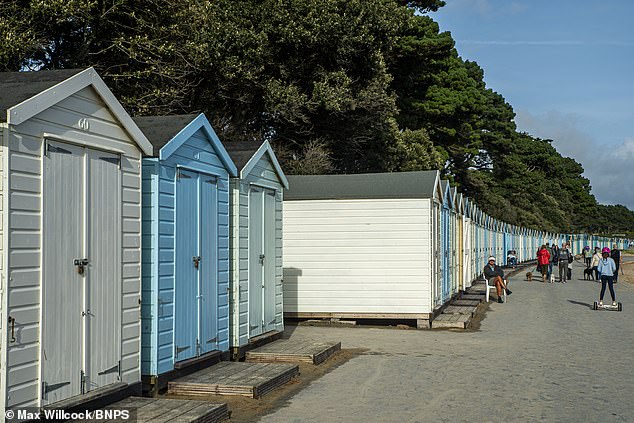 A planning probe has been launched into a controversial row of recently extended beach huts that have divided both locals and tourists at Avon Beach, Christchurch

Michael Smith, from Christchurch, commented: ‘This retrospective application is the 21st planning application made by the tenants in the last eight years.

‘A drip feed of turning a sensitively-sized beach cafe into an emporium-sized low grade jumble of buildings. Something that would never have been allowed under one application.

‘Additionally, several of the applications including this one have been retrospective, indicating a complete disregard for the rules of the lease and the feelings of local residents…

‘My main concern is the 75% size increase that totally uses the additional promenade width that was paid for out of public funds (our tax) to inflate the profits of the applicant. This cannot be allowed to be upheld.’

Sophie Morris, another local resident, said: ‘I object most strongly to the increase in size of any of the beach huts. The promenade in Avon beach is extremely busy and crowded in the summer.

‘It simply does not make sense to significantly increase the size of the beach huts to benefit one sole trader at the inconvenience of everyone else – people who pay council tax which goes towards paying for this public land.

‘Saying yes to the request to increase the size of the beach huts would imply a low council priority for the spread of Covid 19, public safety, disabled access, right of way, and the voice of the residents.’

All the huts are just under 7ft wide but some have been increased in length, from 7ft 8in to 13ft 7in. The enlarged huts are rented out an extra £70-per-week and up to £420 more for longer hire.

The promenade at Avon Beach was raised and widened at a cost of £500,000 in 2017 to protect it from storm flooding. The work was largely funded by taxpayers’ money, with Avon Beach Ltd contributing ten percent (£50,000) towards the development.

In some cases the existing promenade would have been narrowed by up to 1.3m if the proposals went ahead

Some objectors said Avon Beach Ltd had only contributed so it could extend its seafront properties. Pictured above: Concept image of an existing beach hut

The application was refused by BCP (Bournemouth Christchurch Poole) council’s planning committee and the enforcement team is now assessing the situation, although Avon Beach Ltd plans to resubmit a new application this week.

The planning committee refused permission stating: ‘The beach huts, by reason of their extended size and further intrusion onto the promenade are considered to result in overdevelopment that would harm the visual amenities of this seafront locality.

‘The width of the promenade would be reduced preventing access for all users of this space and seating, tables and other beach paraphernalia placed beyond the beach huts would create obstructions for walking, cycling, pushchairs, wheelchairs and scooters.’

A BCP Council spokesperson said: ‘The council is aware a number of the beach huts are unauthorised and there is an open enforcement investigation into this matter.

‘The council will need to determine what action is appropriate to take in light of a potential breach of planning control.’

A spokesperson for Avon Beach Ltd said: ‘We are currently in the process of resubmitting the beach hut planning application and are working closely with the planning department at BCP Council.’