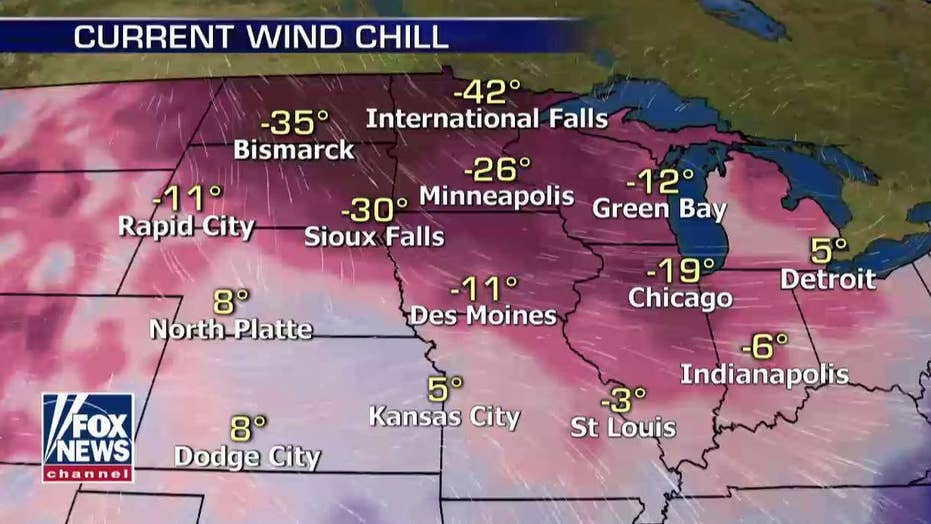 Shelter employees across the Midwest worked fervently Tuesday to find safe harbor for thousands of homeless people with no place to go, as officials warn the extreme cold set to seep into the region overnight could prove deadly for anyone left on the street.

The National Weather Service said Tuesday "one of the coldest arctic air intrusions in recent memory" is expected to blast the Upper Midwest and Great Lakes from Tuesday through Thursday, likely leading to widespread record lows and low maximum temperatures.

"We actually might see cold temperatures that we have never seen before or felt before across the Northern Plains," Fox News Senior Meteorologist Janice Dean said on "FOX & friends." "This is potentially deadly weather. You cannot be outside in temperatures like that. Your skin will freeze in minutes." 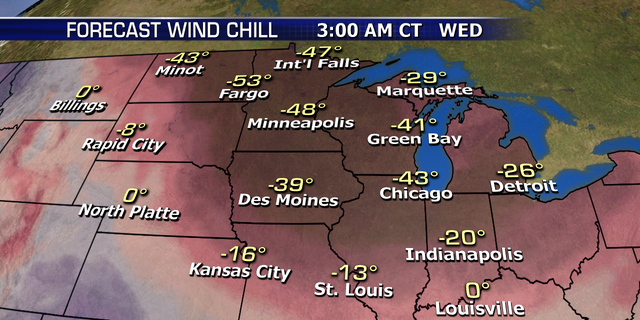 The wind chill forecast for Wednesday morning in the Midwest.
(Fox News)

Temperatures on Tuesday will enter subzero territory, but the worst is expected to come Wednesday. That's when wind chills in northern Illinois could fall to negative 55 degrees, while temperatures in Minnesota may plunge to minus 30 degrees with a wind chill of negative 60.

The governors in Michigan and Wisconsin have declared states of emergency ahead of the dangerously cold weather. 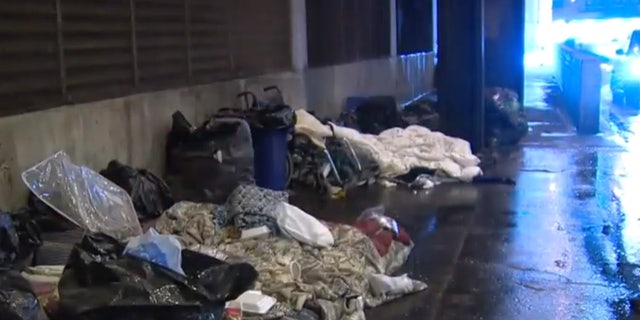 City officials in Chicago are scrambling to get the homeless population off the streets before the bitter cold air arrives by Wednesday.
(FOX32)

The expected onslaught of frigid conditions have set agencies and nonprofit groups in Chicago scrambling to get the area's homeless population off the streets before the bitter temperatures descend on the city.

Chicago Mayor Rahm Emanuel said Monday the city plans to park CTA buses near homeless populations over the next few nights and expand the number of warming shelters.

"We have opened two additional 24-hour warming centers, our Garfield Community Service Center at 10 South Kedzie, and our King Community Center at 4341 South Cottage will each be open 24 hours a day,” Commissioner of Family and Support Services Liza Morrison-Butler said at a news conference. 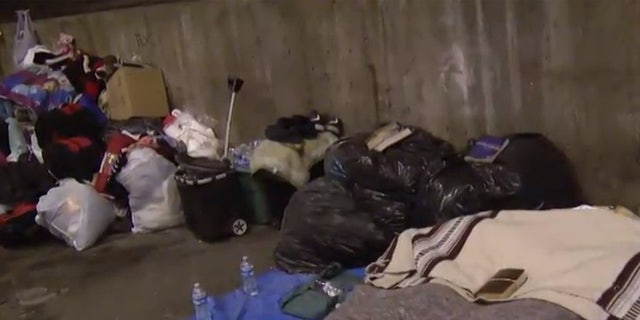 Chicago plans to park CTA buses near homeless populations over the next few nights and expand the number of warming shelters.
(FOX32)

The Salvation Army was out in neighborhoods Monday handing out hot soup and warm clothes to people on the city's West Side. Major Nancy Powers with the Salvation Army told FOX32 the concern is with the small percentage of the homeless population that refuse to come in from the cold.

"Just trying to get them not to freeze to death,” she said. “In this weather, believe it or not, at 20 degrees below zero, there are some folks who are still going to stay put."

AT WHAT TEMPERATURE CAN YOU GET FROSTBITE? SIGNS, SYMPTOMS AND EVERYTHING ELSE TO KNOW

Large crowds were already beginning to gather at one warming center on Monday as volunteers handed out supplies. 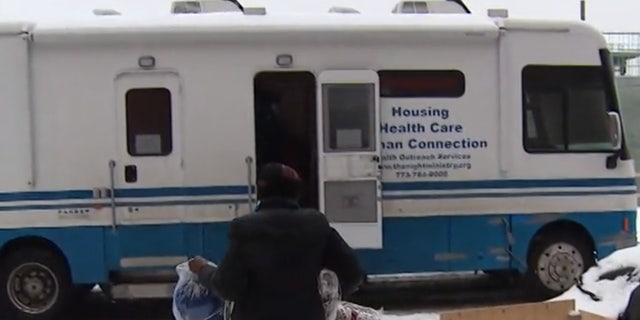 The Night Ministry bus was loaded with supplies which will be distributed Monday night in neighborhoods.
(FOX32)

In Minneapolis, the Salvation Army said Monday it was opening shelters for 24 hours to help people escape from the cold. 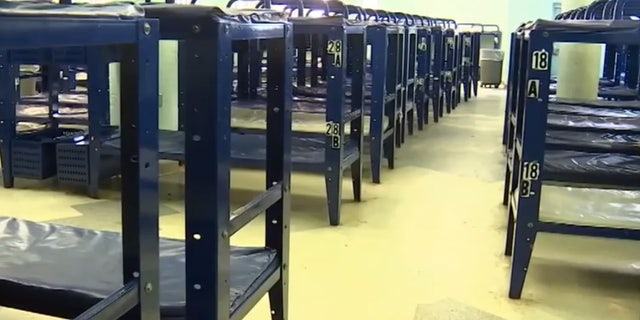 Shelters in Minneapolis have added more beds for the expected influx of people over the next three days.
(FOX9)

“People are like, ‘I enjoy the weather like this, I don’t have to go out,’ but now what happens to people that are out, they have to come in somewhere and the Salvation Army is willing to open our doors,” said Captain Bersabe Vera of the Salvation Army told FOX9.

Another organization, Union Gospel Mission Twin Cities, said it was preparing additional space to hold more people during the bitter blast of cold. The group said more beds were being added for the next three days at a facility in St. Paul. 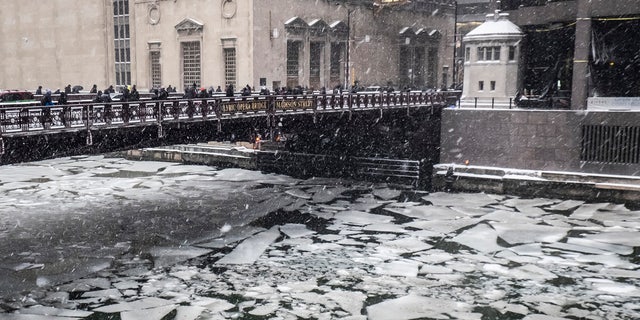 The extreme cold is also leading to school cancellations and travel disruptions throughout the region as officials prepare for its impact.

Minneapolis Public Schools officials have canceled classes through Wednesday, when the region is expected to experience frigid temperatures not felt for a quarter century. Hundreds of Michigan schools were closed Tuesday, including in Detroit, while Chicago Public Schools canceled Wednesday classes because of the anticipated cold snap.

What is a polar vortex?

The polar vortex could sweep across the east coast this winter, bringing with it harsh conditions, climate scientists have warned.

The Chicago Zoological Society said it was closing the Brookfield Zoo on Wednesday and Thursday — marking only the fourth time the zoo has closed during its 85-year history — to ensure the safety of its employees and animals.

WHAT IS A POLAR VORTEX? A LOOK AT WHAT COULD BE IN THE FORECAST THIS WINTER

At O'Hare International Airport in Chicago, the high temperature on Wednesday is expected to be negative 14 degrees, which would break a record set on Jan. 18, 1994. Hundreds of flights have been canceled at O'Hare and Chicago's Midway Airport on Tuesday due to lingering effects of the winter storm that hit the region on Monday, according to the Chicago Department of Aviation. 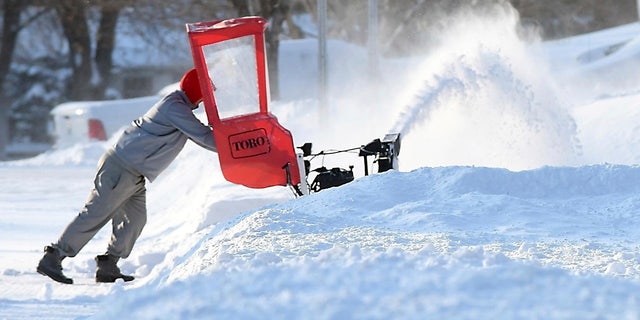 Aaron Braun puts in extra effort to get through the pile of snow at the end of his Mankato, Minn., driveway Monday, Jan. 28, 2019.
(Pat Christman/The Free Press via AP)

The cold will curtail Amtrak operations, with some scheduled trains between Chicago and St. Louis, Carbondale, Milwaukee and Detroit canceled due to the cold snap.

The U.S. District Court for the Northern District of Illinois will be closed Wednesday, in addition to several universities.

Cold weather advisories are in effect across a broad swath of the central U.S., from North Dakota to Missouri and spanning into Ohio. Temperatures will be as many as 20 degrees below average in parts of the Upper Great Lakes region and Upper Mississippi Valley, according to the National Weather Service. 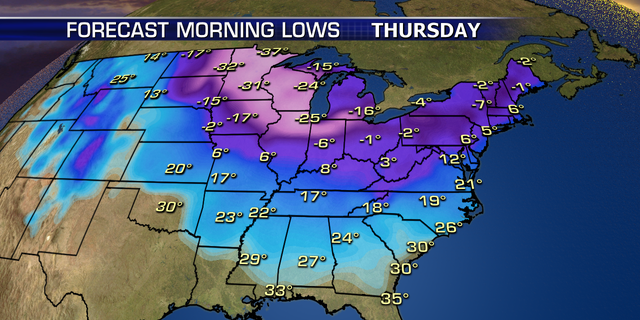 The forecast for low temperatures on Thursday from the arctic blast.
(Fox News)