What if I told you that we could have maintained a zero-COVID nation, without resorting to any extended lockdowns, irrespective of our vaccination levels?

What if I told you that we already have the technology to make our contact tracing so fast, so near perfect, that it could outpace any variant? Because actually, I’m pretty sure that’s true. Here goes. 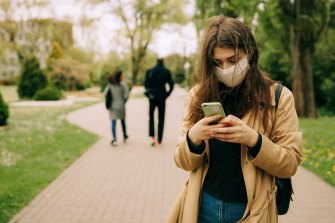 We could give all the GPS data from our phones to our state governments.

Basically, we give all the GPS data from our phones to our state governments. We know the phone companies already have it. We know our governments even see it in aggregated form, because they will often quote this “mobility data” to tell us what effect lockdowns are having and how much the general population is complying with restrictions.

So, disaggregate it. Use the data attached to each individual phone. That way, the moment you have a positive COVID-19 case, you can immediately identify every phone that came anywhere near that person and get them into quarantine. Then you can trace the phones of secondary and tertiary contacts. You can do it in a trice. Sure, that will end up being a lot of people, but you’ll probably very quickly get to the point where all your new cases are among those already in quarantine.

That would be so much more effective than relying on people to check in everywhere on QR codes, because the data would be much more comprehensive. Think of it as a version of the COVIDSafe app that actually works. Or a more palatable version of everyone wearing a tracking device.

Actually, come to think of it, maybe we could just all literally wear tracking devices. That would probably be even more reliable than phone data. Lockdowns over. 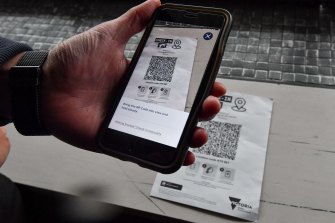 Checking in with a QR code.Credit:Joe Armao

Except that is a truly terrible idea. I’ll leave it to the tech boffins to explain all the potential disaster scenarios, how nefarious actors might be able to hack into some of this data and use it in nefarious ways. For my purposes though, we need only consider the most lamentably ignored story of the week, which involves people we aren’t meant to consider nefarious at all: our police.

Turns out, in multiple states they’ve been trying to access QR check-in data to solve crimes. They’ve even accessed that data twice in Western Australia without a warrant. That prompted WA to ban police from doing so. This week, the national privacy watchdog called for all governments to do the same.

That seems especially relevant for Victoria, which has no ban in place despite having rejected police requests for access three times. That leaves Victorian police with the option of convincing a court to give them a warrant for the data. And the Victorian government seems happy to leave that in the courts’ hands. Meanwhile, in Queensland, we’ve seen a court grant exactly such a warrant.

This isn’t satisfactory because this isn’t merely some legal matter. It’s a fundamentally political matter. Our governments are wielding extraordinary powers in an extraordinary time, greatly limiting the ordinary checks and balances that courts – or even Parliament – would usually provide. That sort of indulgence requires citizens to confer on governments a monumental trust. 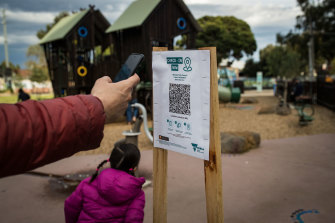 A parent uses a QR code check at a playground in Brunswick when they were reopened in early September.Credit:Getty

Everything about this use of QR data violates that trust. In fact, it does it in two ways. The most immediate and practical is that these data are being gathered exclusively for public health reasons. We, as citizens, are being forced to participate in this de facto surveillance program and for the most part, we happily comply for the very good reason that it is invaluable to contact tracing. But that only works if people have unconditional confidence that this data can’t be used against them.

How many times have we heard premiers plead with the public to tell the truth to contact tracers even if that means owning up to something illegal, followed by a guarantee that this won’t lead to punishment? In a pandemic, we can’t afford to create a single disincentive for people to obfuscate with contact tracers. And the mere possibility that police can use this data for any other reason will be reason enough for some number of people to stop checking in.

But the second violation is even more profound because it goes to the heart of the pact we make with governments at times like these. We are in a time of emergency politics, in which governments claim the right to do things that would be intolerable at any other time.

Indeed, they are only tolerable now on the understanding that government – and its organs such as the police – will not abuse this power by using it for anything beyond the emergency itself. There is nothing normal about QR check-ins. They must therefore not be used for a normal purpose.

But when the police request QR data, they are using emergency measures for routine business. The fact they would even think to try suggests they don’t understand the true gravity of emergency measures in a democracy. This is necessity giving way to convenience, so it’s a good thing we weren’t using individual GPS data or tracking devices. Where we might see a pact, they see a tool. And that whole mode of thought must be wholly impermissible, because if it’s acceptable for one emergency measure to seep into normality, there is no logical reason to resist several more doing the same.

That’s because non-normality is the very essence of emergency. To create an exception erodes the essential meaning of emergency measures. Once breached, the wall between emergency and routine measures ceases to be a wall at all.

Perhaps, given the nature of their work, it is naive to expect police not to try to breach it. But it is the task of elected governments to reinforce it. And that task is among the most vital tasks they have, because that wall exists to protect our post-emergency selves.

Waleed Aly is a regular columnist.