Pub patrol: Police forces step up checks to stop English drinkers sneaking into Wales for a pint after ‘firebreak’ lockdown came to end

Pub patrol officers are stepping up border checks to stop English drinkers sneaking over to Wales for a pint.

Police say they will be carrying out extra checks on drivers as England plunged back into lockdown while Wales emerged from a two-week ‘firebreak’.

A joint operation has now been launched by forces either side of the border to catch Brits trying to ‘take advantage’ of open pubs in Wales.

But landlords on the Welsh side of the border have complained about having to check customer’s IDs and kicking English customers out. 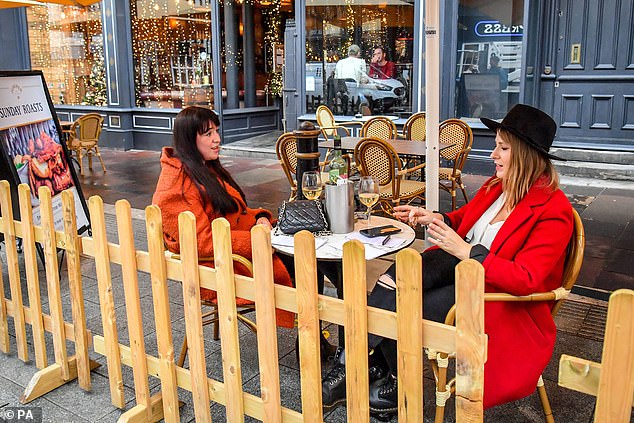 People enjoy a drink outside a pub in Cardiff, as restrictions are relaxed following a two-week ‘firebreak’ lockdown across Wales – but people living in England are not allowed in

Mandy Broady, landlady of The Boat Inn in Chepstow, which shares a border with Gloucestershire, said rules were ‘unfair’ on staff.

The market town of Chepstow spans the border of England and Wales, and Ms Broady says her pub is, ‘literally one minute from the border.’

In Chepstow a bar, a pub, a number of small shops and an Army camp fall within England’s lockdown.

Ms Broady said: ‘I am doing everything I can to keep my staff and customers safe, we are taking all their details, making sure we keep to rules on social distancing but I think it’s a little unfair to expect us to police the IDs of everyone who comes in.

‘Where I am is literally one minute from the border – half my staff would be English and half would be from Wales. I’m told we can’t serve the English ones so we’ll see how that goes.

‘I would understand if we were in the middle of Wales but we’re on the outskirts and I think it’s unfair.

‘It’s hard enough to keep up with it and getting the staff in to deal with it without having to ask them to start taking ID.’

Gwent Police Chief Superintendent Mark Hobrough said: ‘Working with our colleagues in Gloucestershire Constabulary, we’re reminding everyone to not take advantage of bars and clubs opening in Wales, and considering breaking the England-wide lockdown.’ 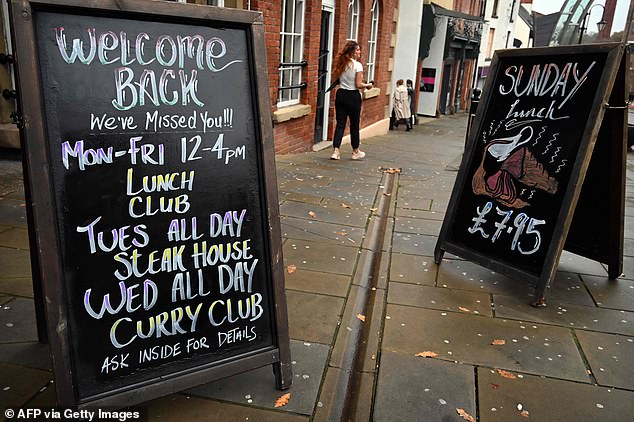 Pub signs are welcoming customers back in Wrexham, North Wales

Gloucestershire Constabulary assistant chief constable Rhiannon Kirk said: ‘This operation is aimed at addressing the risk that a small minority could travel into Wales to drink during lockdown and then drive back home under the influence.

‘It is in line with our Safe and Social Roads priority of our police and crime plan and our activity will be targeted and proportionate.

‘Drink driving is one of the fatal four causes of collision and can have devastating consequences for those who do it, other road users and their loved ones.’