Police kick down woman's door after getting the wrong flat

A police force knocked down the door of a woman living alone in a dangerous neighbourhood and left it with only a weak board blocking the entrance, her partner has claimed.

Daniel Hartley, an assistant professor at Durham University, took to Twitter after his girlfriend struggled to make West Yorkshire Police take responsibility for breaking down the door to her flat in Bradford on Thursday.

Photographs show the woman’s door was completely destroyed in what he claimed was a raid ‘based on erroneous information of a crime occurring there’.

West Yorkshire Police told MailOnline the force was wrong to leave the door improperly secured and said it will be paying Mr Hartley’s partner compensation.

Mr Hartley said his girlfriend returned home to find a handwritten note scrawled on the back of an envelope asking her to call 101 for more information. 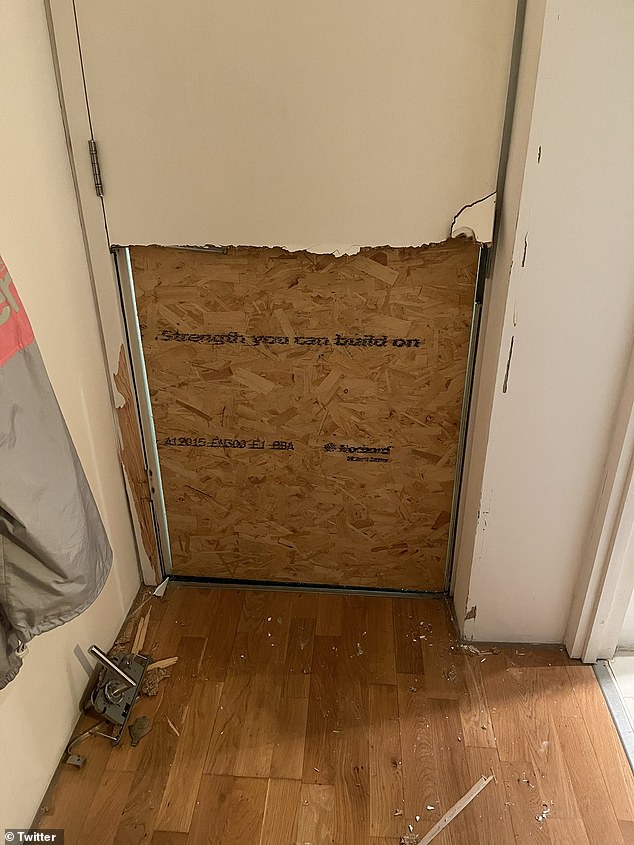 Daniel Hartley, an assistant professor at Durham University, took to Twitter after his girlfriend struggled to make West Yorkshire Police take responsibility for the door they broke down 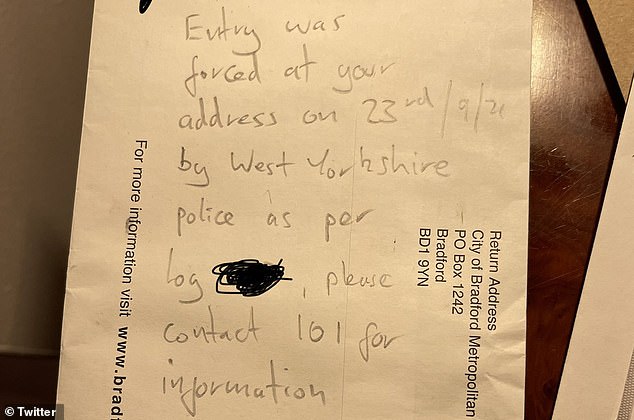 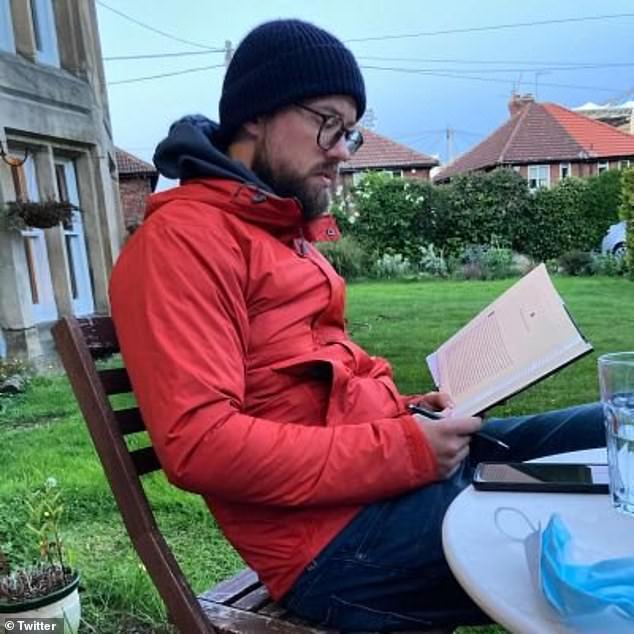 But when she called the number the force could not find her information ‘because the officers had entered the log details so badly, incorrectly, and haphazardly’, he claimed.

Then the woman faced fronting the cost of a replacement door herself because the force allegedly wouldn’t pay. Instead she was told to ‘send the invoices and he would judge whether or not they would pay’.

Mr Hartley posted video footage showing the flimsy MDF board that was taped across the destroyed door.

To make sure the person they were looking for wasn’t inside they broke it down.

Mr Hartley wrote: ‘The police used the company RapidSecure to attach a piece of MDF to the remaining top half of the door. It hung flimsily, could be easily pulled off or simply unscrewed. You could see into the flat through the cracks left each side. They classed this as ‘secure’.’

He said his girlfriend’s building had a ‘high crime rate’ and less than a month ago ‘a woman was sexually assaulted after which female police officers knocked on flats telling women to lock their doors securely and not open them to strangers’.

‘The officer we spoke to yesterday acknowledged this,’ Mr Hartley added.

‘They’ve now left my partner, who lives alone, extremely vulnerable. She is having to pay for emergency security reinforcements of the door until a new door – and entire doorframe – can be fitted. It could be weeks before that happens. The police are offering no assistance.’

Mr Hartley said the force’s solicitor assigned to his girlfriend’s case was on annual leave.

‘After constant pestering, her case was assigned to a force’s solicitor in charge of compensation for the damage caused. His initial email informed her he would be on annual leave until Tuesday. They refused requests to reassign her case to someone not on leave,’ he wrote.

‘Throughout, the police officers involved have issued no apology, exhibited total indifference, and abnegated all responsibility.’

West Yorkshire Police Detective Superintendent Sarah Jones said: ‘Our officers carried out a search at several addresses in an apartment block in Patent Street, Bradford, on 23 September 2021 following a report of a concern for safety of potentially vulnerable people.

‘In a bid to locate the individuals, officers began door-to-door knocks, including that of the complainant. The door was unanswered, so officers forced entry by knocking the door down.

‘We accept that the way the door was secured was inadequate, and on behalf of the force I have apologised to the complainant for the inconvenience and concern this has caused her.

‘We forced entry to the property in good faith, and the complainant understands the circumstances as the safety of the individuals was paramount at the time. This does not however justify leaving the door unsecured.

‘We have spoken to the complainant following this incident and we will be compensating the cost of the door repairs.’