Police prepare for a violent summer as lockdown restrictions are eased

Police have said they are concerned that an increase in violent crime by younger unemployed men and gangs looking to reclaim their turf will follow the relaxation of lockdown measures.

A ‘toxic mix’ of young men out of work, public gatherings being permitted again and later, the opening of licensed venues such as pubs and clubs, has police taking steps to prepare for the days when the UK starts to lift its lockdown restrictions.

London police are also said to be bracing for a surge of gang related activity, such as drugs and knife crime, as gangs grapple to regain control of their territories after weeks off the streets. 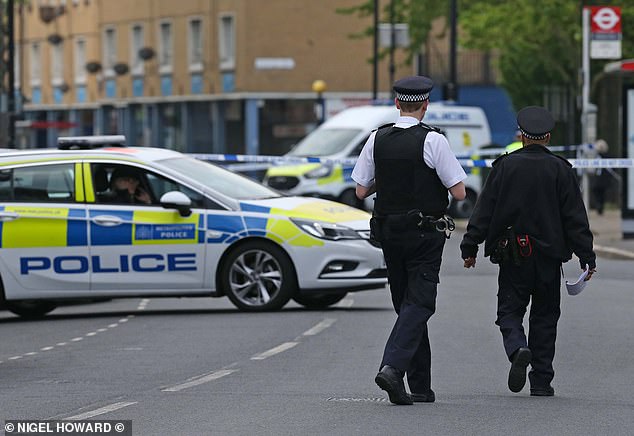 Police in London, pictured cordoning off an area in Canning Town after a murder on April 29, have said that gang violence could increase after the lockdown is lifted in the city

Speaking to The Times, West Midland’s police commissioner David James said: ‘I fear that we may be facing a summer crime wave. Young men out of work, venues reopening and large groups congregating is a toxic mix for crime.

‘I am particularly worried about public order offences, antisocial behaviour and alcohol-fuelled violence,’ he added.

He said that if there were to be hundreds of thousands of young men in the West Midlands finding themselves with no employment over the summer, there could be a lot of young men on the street with nothing to do. This, he says, often results in ‘crime of various sorts’.

Furthermore, reopening pubs could also see people drink more than usual, he warned, which could prove to be trouble if people’s potentially celebratory mood turns violent.

Another police official, Ken Marsh, who is the chairman of the Metropolitan Police Federation, said there was ‘massive concern’ among the police about a post-lockdown surge in knife crime and violence in London.

‘Gangs are not out at the moment because of the virus, but ultimately they will want to reassert their position, Marsh said to The Times. ‘We have seen a big drop in knife crime. But when lockdown is over, drug dealing and gang fighting will increase again.’ 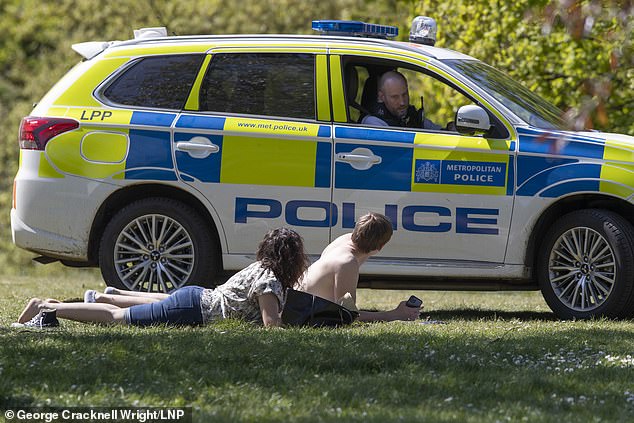 The UK has seen less reported crime during the lockdown as people have remained indoors,and police have been tasked with enforcing the restrictions put in place by the government. Pictured: Metropolitan Police speak to sunbathers in Greenwich Park

Marsh said that the Metropolitan Police were already discussing how best to confront the issue as the government continues to look at how to lift the country out of the lockdown safely.

The impact the coronavirus has had on the economy could well result in a more ‘volatile and agitated’ society, said Paul Griffith, president of the Police Superintendents’ Association.

He explained that as with any case of economic downturn and deprivation, there is a risk levels of crime and disorder will increase, and that there would be a natural rise in crime as pubs, bars, clubs and other licensed premises reopen, and as public gatherings were permitted again. 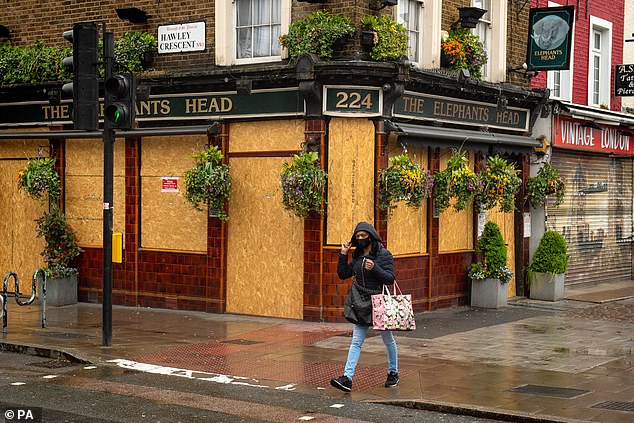 Police also fear that when licensed premises reopen there could also be a surge in violent and anti-social behaviour. Pictured: A pub in North London is bordered up during the lockdown

He added that its possible crime figures could also spike post-lockdown as evidence of domestic violence, child sexual exploitation and other crimes committed during the lowdown come to light.

The economic ramifications of the coronavirus could also lead to more desperate crimes, such as theft, in order for people feed themselves, and Andy Cooke, chief constable of Merseyside police, argued that unemployment was more likely to cause this than violent crime.

‘In recession you see an increase in the lower end of crime. For example, acquisitive crime might rise because people steal to feed themselves,’ he said.

Cooke said that all police forces were taking the ‘common sense’ approach of planning for increase in crimes as restrictions are relaxed.