Police search homes of French health minister, former PM and other top officials as part of criminal investigation into government handling of the covid crisis that could see them jailed

French police searched the homes of the health minister and former PM today as part of a criminal investigation into the country’s handling of Covid-19.

The probe into ‘possible criminal offences’ was launched in July after patients, doctors and others filed dozens of complaints including over shortages of masks and other equipment.

The investigation could theoretically lead to a two-year prison sentence or a fine from a special court – although Macron himself is immune from prosecution. 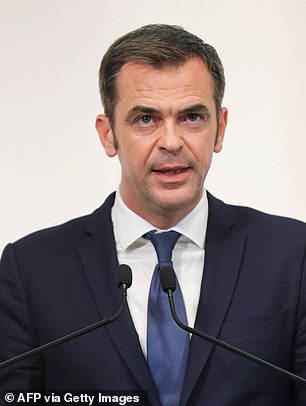 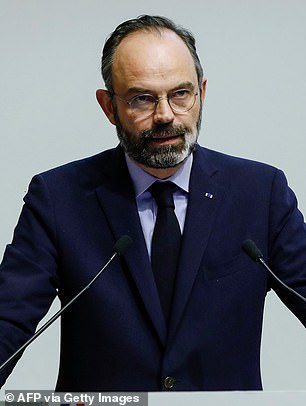 Veran, Philippe and former health minister Agnes Buzyn are accused of ‘failing to fight a disaster’ after France’s government acknowledged mask shortages and other missteps in its handling of the pandemic.

The investigation was ordered by a special French court, the Court of Justice of the Republic, which deals exclusively with cases against top officials.

The court usually gets only a few complaints a year, but received an unprecedented 90 complaints earlier this year because of the pandemic.

In July, it announced that it had thrown out 44 of them including more serious allegations such as manslaughter and endangering lives.

However, it ordered an investigation into some of the others, and Paris prosecutor Remy Heitz said authorities were looking into ‘possible criminal offences’.

Philippe had his home searched three months after he was replaced as prime minister by Jean Castex, a civil servant who was little-known until the pandemic.

Others who had their homes searched included the head of the country’s national health service, Jerome Salomon, and a former government spokeswoman Sibeth Ndiaye. Veran’s office was searched as well.

Salomon abruptly cancelled an early-morning live interview on BFM-TV due to ‘personal reasons,’ according to the network. 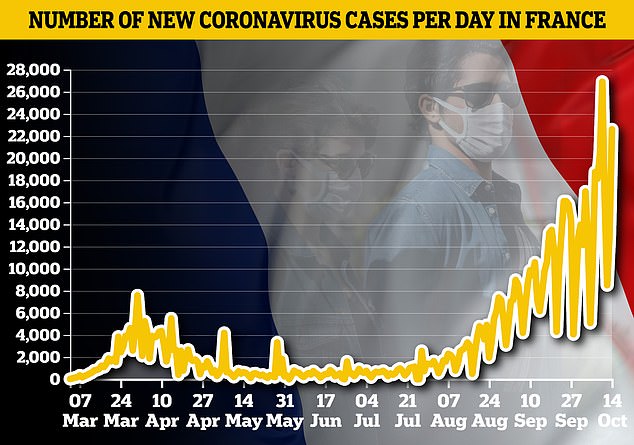 French coronavirus cases have spiralled alarmingly in recent weeks, with more than 125,000 positive tests announced in the last week alone 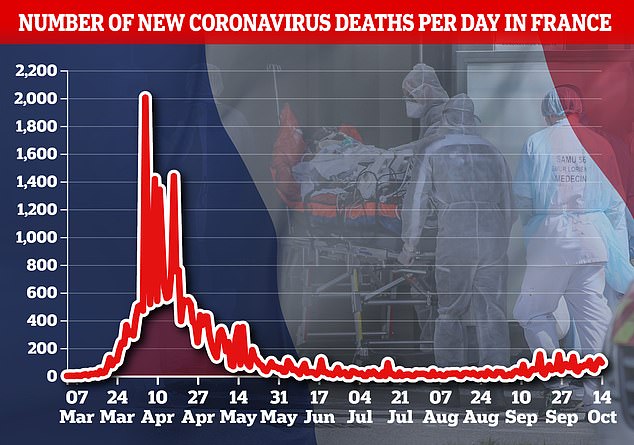 Like in most of Western Europe, France’s daily death toll has risen from the very low figures of the summer but is still lower than at the height of the crisis in the spring

Jean-Luc Reitzer, an opposition member of the French parliament who was hospitalised with a severe case of coronavirus, said he was shocked by the searches.

‘Do our citizens seriously believe that the shortages, which were real, were voluntary?’ he told BFM.

Critics accuse the government of being too slow to roll out large-scale Covid-19 testing and playing down the importance of wearing masks in the early weeks.

As in many countries, medical equipment was initially in short supply and was being reserved for health workers.

The Court of Justice of the Republic is the only French court where government ministers can be tried for their actions while in office.

It was created in the wake of a major health scandal in the 1990s, but trials before the court are rare.

The investigation is separate from dozens of lawsuits filed in other French courts against nursing homes or others accused of mismanaging the virus crisis. 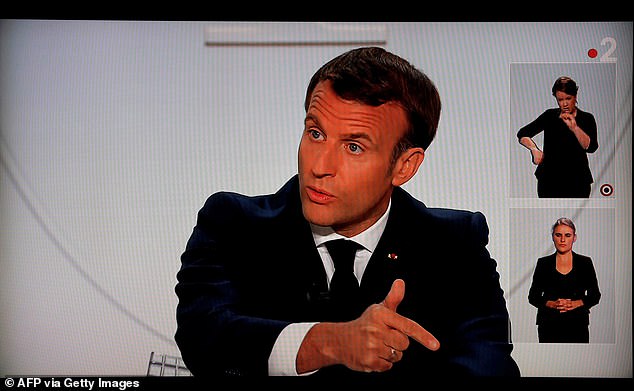 Emmanuel Macron, pictured on Wednesday during an address in which he announced a curfew for Paris and other cities, cannot be prosecuted while in office

Macron himself cannot be targeted by lawsuits while in office because sitting presidents have immunity from prosecution.

The president, 42, yesterday announced a curfew for Paris and eight other cities after daily infection rates reached alarming new levels.

More than 125,000 people have been infected in the last week alone, with average daily cases now dwarfing those in Spain.

Deaths have also increased from their low summer levels, with another 104 fatalities on Wednesday bringing the total to 33,037.

Under the curfew, people cannot leave their homes between 9pm and 6am except for essential reasons.

‘We have to act. We need to put a brake on the spread of the virus,’ Macron said, saying daily cases had to be brought down to the low thousands.

‘We are going to have to deal with this virus until at least the summer of 2021,’ Macron said, saying ‘all scientists’ were in agreement on that point.