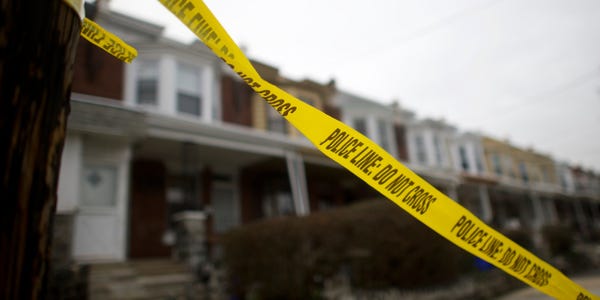 Philadelphia police shot and killed a 27-year-old Black man on Monday afternoon after responding to a call of a man with a knife, firing over a half-dozen times in front of a crowd of eyewitnesses, according to local reports.

Video posted on social media shows two police officers telling the man, who was holding a weapon, to "put the knife down." They opened fire as the man walked toward them in the street.

"Oh my god," a man on the video can be heard. "They just killed him in front of me."

"You didn't have to give him that many shots," he added as onlookers rushed to the man's body in the middle of the street.

Police appear to have fired as many as 10 times, according to the video. The Philadelphia Inquirer reported that there were at least 13 evidence markers at the crime scene.

Witnesses told the Philadelphia Inquirer that the man was holding a knife but was never closer than 10 feet to police. A reporter for the newspaper said there were "numerous" shell casings on the ground.

The Philadelphia Police Department did not immediately return Insider's request for comment.

However, a spokesperson told the Inquirer that police arrived at the scene at 3:43 p.m., responding to a call of a man with a knife. After he was shot, police took the man to a hospital, where he was pronounced dead.

In a statement, Philadelphia District Attorney Larry Krasner said his office is investigating "today's fatal shooting of a civilian by police."

"In the hours and days following this shooting," Krasner added, "we ask Philadelphians to come together to uphold people's freedom to express themselves peacefully and to reject violence of any kind."

Have a news tip? Email this reporter: [email protected]