Four people have fronted court charged over the discovery of $123 million worth of liquid methamphetamine in mustard bottles.

Police now have thousands of calls and messages made among the alleged syndicate to scrutinise, the court heard on Tuesday. 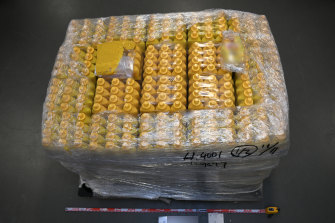 The four Vietnamese dual nationals faced court several days after police made the drug discovery within a shipment of 1600 mustard bottles that arrived in Melbourne via air cargo from Chicago on November 11. The bottles contained more than 560 kilograms of liquid methamphetamine, which is cooked in clandestine labs to make ice. It is the largest seized importation of liquid methamphetamine in Victorian history and the second-largest nationally.

Police allege the four arrested on Friday are members of a sophisticated Vietnamese-Australian crime syndicate.

On Tuesday, during an online hearing of Melbourne Magistrates Court, magistrate Tara Hartnett gave prosecutors and police extra time to prepare the brief of evidence against the accused based on the volume of material. 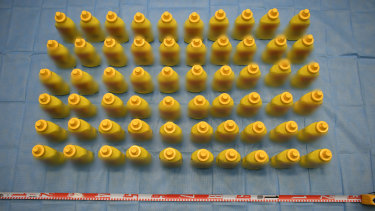 The liquid meth is estimated to be worth more than $123 million. Credit:AFL

Tung Duc Nguyen, 29, is charged with one count each of importing and attempting to possess a commercial quantity of a border-controlled drug.

The court was told Ms Nguyen was withdrawing from a drug of dependence and took medication for allergies to mould and dust mites. 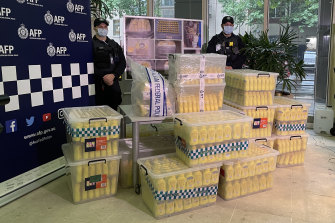 The court heard it was the first time in custody for all four. They were remanded in custody and are due to return before court on May 20. None applied for bail.

After the drugs were discovered on November 11, crime scene specialists from the Australian Federal Police conducted forensic testing on the consignment and confirmed the two pallets contained liquid methamphetamine with an estimated street value of more than $123 million.

At an Albion property, investigators seized several kilograms of suspected illicit drugs believed to be heroin and methamphetamine.

Raids were conducted throughout Friday in St Albans, Sunshine and Sunshine North, and at commercial properties in Parkville and Sunshine. 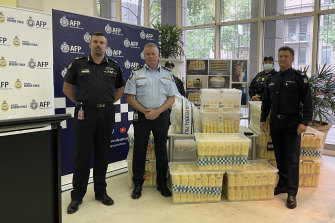