Washington: Democrats in Congress have “callously harnessed” the deadly Capitol riot of January 6 for their own political gain, Donald Trump’s lawyers argue in a legal brief ahead of the former president’s Senate impeachment trial.

In a 78-page brief released on the eve of Trump’s second impeachment trial, his lawyers argue that Trump was only speaking figuratively when urging his supporters to “fight like hell” against the election result and say he should not be held responsible for his supporters’ actions. 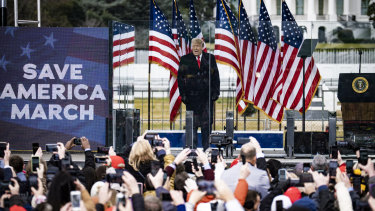 Trump’s speech to supporters before the Capitol riot will be a focus of his second impeachment trial. Credit:The New York Times

They state that the fiery speech Trump gave to supporters just before the assault on the Capitol “cannot and could not reasonably be interpreted as a call to immediate violence or a call for a violent overthrown [sic] of the United States’ government”.

Trump’s impeachment trial, which begins on Wednesday (AEDT), will see the former president’s conduct again dominate debate in Washington less than a month after his departure from the White House.

“One might have been excused for thinking that the Democrats’ fevered hatred for Citizen Trump and their ‘Trump Derangement Syndrome’ would have broken by now, seeing as he is no longer the president, and yet for the second time in just over a year the United States Senate is preparing to sit as a Court of Impeachment,” Trump’s legal team writes.

“Instead of acting to heal the nation, or at the very least focusing on prosecuting the lawbreakers who stormed the Capitol, the Speaker of the House and her allies have tried to callously harness the chaos of the moment for their own political gain.”

Describing Trump’s impeachment as a form of “political theatre”, his lawyers call on the Senate to “summarily reject this brazen political act”.

In order to convict Trump and ban him from running from office again, 67 of the 100 members of the US Senate would have to find him guilty – a high bar that is extremely unlikely to be reached.

At most, a handful of Republican senators are expected to vote to convict Trump, well below the 17 defections required.

In their brief, which offers the most detailed preview of their trial arguments, the former president’s lawyers home in on Trump’s January 6 speech to supporters near the White House.

They note that, 20 minutes into the speech, Trump urged his supporters to march to the Capitol “peacefully and patriotically”.

Other references to “fighting” were used in the figurative sense of encouraging people to stand up for their beliefs and make their voices heard, they say.

“Notably absent from his speech was any reference to or encouragement of an insurrection, a riot, criminal action, or any acts of physical violence whatsoever,” they write, saying that Democrats have punished Trump for political speech that is protected by the US constitution.

“Courts do not deem speech unprotected based on how it could possibly be contorted or misunderstood by an unreasonable listener,” they write.

“Otherwise, speakers at public events would be put at the mercy of the unhinged reactions of their most unreasonable audience members.”

In a response, the Democratic impeachment managers argue it is naive to claim that Trump did not bear responsibility for the Capitol riot.

“When President Trump demanded that the armed, angry crowd at his Save America Rally ‘fight like hell’ or ‘you’re not going to have a country anymore,’ he wasn’t urging them to form political action committees about ‘election security in general,’” they write.

“The House did not impeach President Trump because he expressed an unpopular political opinion. It impeached him because he willfully incited violent insurrection against the government.”

In an 80-page filing last week, the Democratic impeachment managers said that Trump was “singularly responsible” the assault on the Capitol because he “summoned a mob to Washington, exhorted them into a frenzy, and aimed them like a loaded cannon down Pennsylvania Avenue”.