Pop stars such as Sam Fender have cut ties with promoter and festival organiser SSD Concerts over a string of allegations by former employees.

On Glassdoor, a website which allows employees to anonymously review their companies, staffers claimed they struggled to get paid and were sexually harassed.

Managing director Steve Davis has been forced to resign after the series of damaging allegations surfaced online.

‘If you didn’t you were berated for it and called things like ugly, frigid or a dog. Took advantage of young female staff took them out to get them drunk and touch them up.

‘Made empty promises about career progression in the music industry so you felt you were almost threatened not to call them out.’

Another wrote: ‘This is the least professional company I’ve ever worked for. Never paid on time (maybe once or twice), never paid the correct amount.’

And one added: ‘I had to undergo therapy to work through the experiences I had while working for SSD Concerts.

‘Management condones, encourages and personally takes the lead on a discriminatory work environment.’ 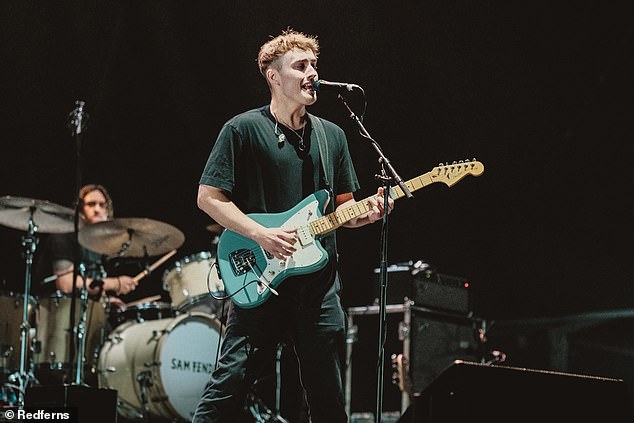 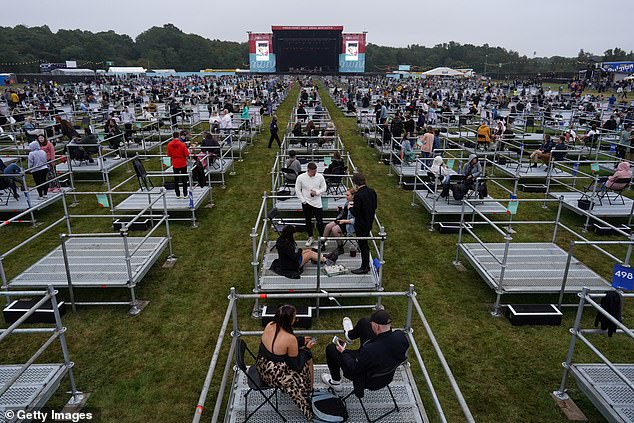 On Glassdoor, a website which allows employees to anonymously review their companies, staffers claimed they struggled to get paid and were sexually harassed. Pictured: A SSD Concerts event in Newcastle last year 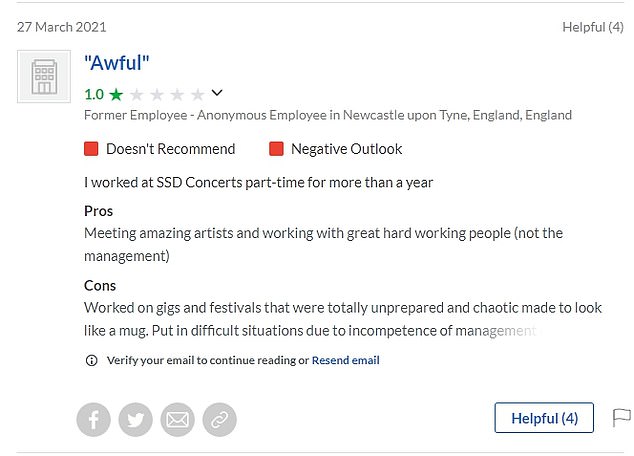 The company put on the UK’s first socially-distanced concert in Newcastle and dominates the North East’s live music scene.

Overall SSD Concerts had 1.5 stars out of five on Glassdoor, and just 12 per cent would recommend working at the company to a friend.

This led stars such as Fender, Idles and Lanterns on the Lake to pull out of using the promoter.

Fender said: ‘I’ve been completely overwhelmed this week after hearing so many shocking stories from our beloved North East music scene.

‘It takes great courage to come forward and share experiences of mistreatment in the workplace. There is absolutely no place for harassment.

‘We will no longer be working SSD but have been working to ensure that ticket holders for our upcoming Newcastle shows will not be affected.

‘The local grassroots scene means so much to me, my band and team. It’s been thriving in recent years but it’s time for a new era.

‘I hope that we can take this opportunity to build a more inclusive industry, that is a safe space for all. We will do more to support it.’

Idles said: ‘In light of the recent allegations against SSD Concerts, we would like to make it clear that they will no longer be promoting our show at Newcastle City Hall on 2 February 2022.’

Lanterns on the Lake asked their fans to get refunds from SSD Concerts over their Newcastle show. 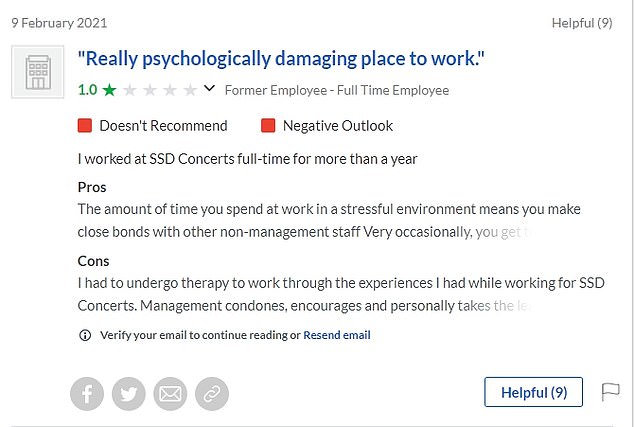 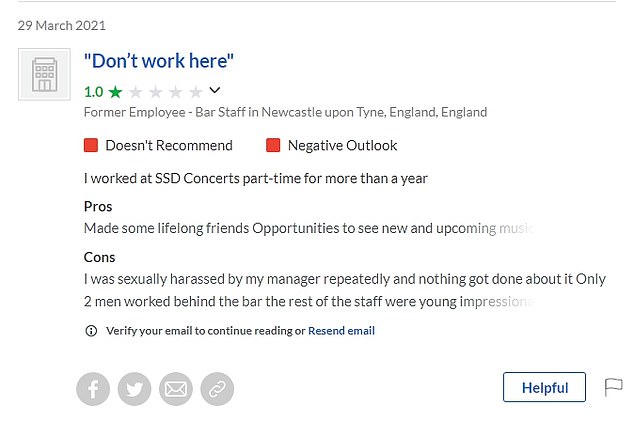 They said: ‘Anyone following the story and accusations surrounding SSD Concerts will understand why we are unwilling to play our Newcastle show if it was promoted by them.

‘I suppose the most disappointing part of this is that there has been no real acknowledgement by SSD of the pain, stress and discomfort they have caused some of their own employees or any indication of what they plan to do to put things right.’

Managing director Mr Davis – who founded the company – has since stood down.

He said: ‘I would firstly like to say that it is vital to take any allegations of inappropriate behaviour seriously.

‘If people feel they have been treated poorly, they should feel safe in speaking out and confident that action will be taken.

‘There have been a number of online allegations, which have saddened me deeply.

‘The seriousness of what has been anonymously alleged – and the hateful response to these claims – has seriously affected my family.

‘They are my priority, and I will do everything I can to protect them from online abuse. 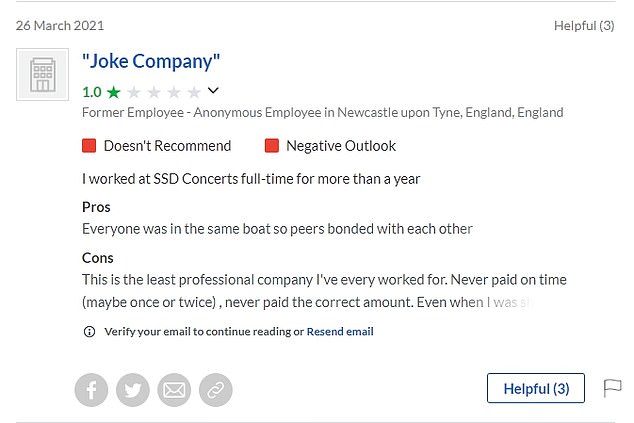 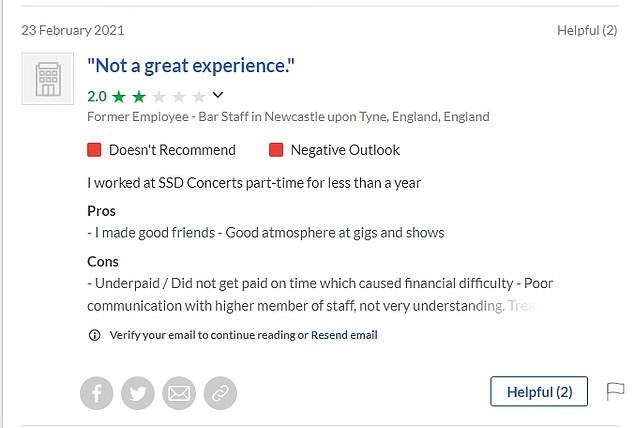 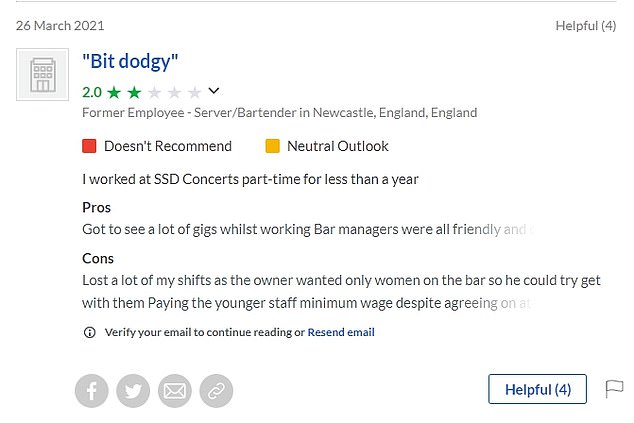 ‘I would hope that this discussion can be one based upon the evidence. I entirely understand why people reading the comments about us posted on Glassdoor would be shocked.

‘If true, they would mean people had been seriously let down. But I have been publicly tarnished based on several anonymous comments posted online.

‘It is with a heavy heart that I step away from something that has taken so long to build, but it is impossible to ignore what has been said and written in the past week.

‘It would appear some people have been upset or made to feel uncomfortable while working at SSD and for that I’m truly sorry.

SSD Concerts said an independent organisation would examine the complaints against the company.

A spokesman said: ‘SSD Concerts can confirm that Steve Davis has decided to resign as managing director and that an independent investigation will be held into recent claims.

‘The wellbeing of our team is of the upmost importance and any allegations of this nature must be investigated thoroughly.

‘SSD Concerts has already opened up a confidential email for anyone who would like to raise a complaint directly to our head of HR.

‘In order to ensure that anyone who wishes to come forward feels confident in doing so, we will also be asking an outside organisation to look into the allegations and be a separate point of contact.

‘We will provide more details on this as soon as possible. The company is also taking steps to ensure that all shows will go ahead and that all tickets remain valid.’

One former worker wrote: ‘I had to undergo therapy to work through the experiences I had while working for SSD Concerts.

‘Management condones, encourages and personally takes the lead on a discriminatory work environment.

‘Most days in work you will be subject to hearing vile, sexual comments from the owner, either about yourself, colleagues or the artists the company works with.

‘Never received a contract, rarely received a payslip and often paid either late or underpaid.

‘Overtime work was expected but you were rarely paid for it, the ‘reward’ often came in the form of food or alcohol.

‘Complete lack of clarity in the company structure, staff responsibilities and hierarchy.

‘No opportunity to progress at this company, regardless of how hard you work or for how long.

‘No matter how exciting the concept of working here might be from the outside, or how the opportunity to work in live events in the northeast seems ”too good to be true”, it is not worth the sacrifice to your mental health.’

They added: ‘I wouldn’t advise anyone to work here, particularly if you are a womxn.’

Another put: ‘Worked on gigs and festivals that were totally unprepared and chaotic made to look like a mug.

‘Put in difficult situations due to incompetence of management and being very isolated.

‘Sent to another city to work promised a hotel, got to hotel and my room didn’t exist so left to find somewhere late at night. Never was reimbursed for it.

‘Constant misogyny – rewarded those who played along with his sexual advances. If you didn’t you were berated for it and called things like ugly, frigid or a dog.

‘Took advantage of young female staff took them out to get them drunk and touch them up.

‘Made empty promises about career progression in the music industry so you felt you were almost threatened not to call them out.

‘Having to beg to get paid – often wrong amounts and nobody was accountable for it.

‘Manager got incredibly drunk at high profile events which led to young staff having to be responsible for his behaviour.’

One said: ‘Underpaid/did not get paid on time which caused financial difficulty – Poor communication with higher member of staff, not very understanding.

‘Treated as just a worker and not a person which sometimes led to feeling uncomfortable at work or when bringing something up.’

Another wrote: ‘This is the least professional company I’ve every worked for. Never paid on time (maybe once or twice) , never paid the correct amount.

‘Even when I was showing the director my bank account he was still saying he’d paid me.

‘The communication was terrible, the director brought in another upper management person who had even worse communication, and just left everyone out to dry most of the time. So lower level staff had to deal with all their issues.

‘The lower level staff constantly had to team together and use their own resources to save this company on numerous occasions, including working 100 hour weeks while the company constantly felt like it was going to go under.

‘The company had to be bailed out by Tokyo on several occasions in the space of a year, zero health and safety, promised bonuses went unpaid. Do not work for this morally bankrupt company.’

One put: ‘I was sexually harassed by my manager repeatedly and nothing got done about it.

‘Only two men worked behind the bar the rest of the staff were young impressionable women.

‘Never paid on time in the total 18 months I was there. Always paid incorrectly and had to literally chase managers down to sort it out.

‘Next to no training. No contract. No regular hours. Guilt tripped into working 12+ hour shifts and to work last minute on days off.

‘Very ”cliquey” vibe Encouraged to do drugs during shifts – proper peer pressure stuff but by 40-year-olds.’

And another added: ‘The owner has no problem throwing around racist and misogynistic slurs. Often asks female staff to come out for drinks with him, or sometimes to come out for a meal because they need to ‘catch up’.

‘Rarely paid on time, often pay would be missing when arrived, pay rises promised that never came along or disappearing after a month, tax deducted from my wage yet never registered with HMRC.

‘Don’t ever offer to do extra work because he’ll never pay you for it either. This same warning goes for freelancers too, you have been warned.

‘Colleagues often let go and slandered like an ex that cheated, with no explanation given for their departure.

‘Also sacked former colleagues for refusing to work during furlough. There’s absolutely no progression in this company, there is an irremovable glass ceiling.’