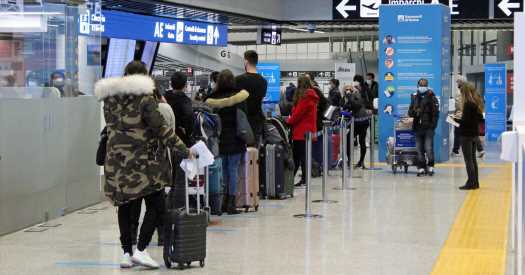 Pope Francis on Sunday criticized people who traveled abroad during the pandemic “to escape the lockdown,” saying they were ignoring those who were suffering.

In his weekly noontime Sunday address, Francis said, “I read in the papers something that quite saddened me: In a country — I don’t remember which — to escape the lockdown and have a good vacation more than 40 planes took off that afternoon.”

“Those people are good people, but didn’t they think of those who stayed at home, to the economic problems of many people who have been knocked down by the pandemic, to those who are ill?” Francis added. They thought “only to go on vacation, to have fun.”

“This really saddens me,” Francis said in a message streamed from the Vatican’s apostolic library. The pope normally blesses the faithful on Sundays from a window in a palace above St. Peter’s Square, but Italy has been on lockdown for the past 10 days, and the square is closed.

It is not clear what report the pope was referring to, or where the travelers were leaving from and heading to. On Saturday, The New York Times reported that more than half a million Americans went to Mexico in the month of November alone, but that article did not include anything about the number of planes on any given afternoon.

While Mexico has relatively few travel restrictions, stricter measures are in place in many countries — and many have been tightened since a more transmissible variant of the virus was first identified in Britain. And international travelers are often ordered or urged to quarantine for a week or more on arrival.

The United Nations World Tourism Organization reported that international arrivals had dropped by 72 percent for the first 10 months of 2020, and anticipates that, when tabulated, the drop for the full year will be between 70 and 75 percent.

On Sunday, the pope reiterated his plea that all peoples and nations should work together to fight the pandemic.

“We know that things will improve in the measure in which, with the help of God, we will work together for the common good, putting the focus on the weakest and the most disadvantaged,” Francis said.

“We don’t know what 2021 holds for us, but what each of us and all of us together can do, is to commit to taking care of each other and of creation, our common home,” rather than thinking of our own interests, Francis said.