Pope Francis gave a veiled ‘two-finger salute’ to ISIS during a symbolic trip to Mosul in Iraq. The Pope spoke and prayed among the ruins of Mosul’s churches, several of which were obliterated during the battle against ISIS. Christians were among those most brutally persecuted by ISIS when they seized Mosul in 2014.

During his visit to the Church Square, the Pope prayed for the victims of the war with ISIS, which left tens of thousands of civilians dead.

He told the crowd the exodus of Christians from Iraq and the broader Middle East had done “incalculable harm not just to the individuals and communities concerned but also to the society they leave behind”.

The Pope arrived in a convoy of five helicopters and amid extremely tight security.

Sky News’ Mark Stone spoke from Mosul: “In a trip full of historic firsts, this was the most symbolic moment.” 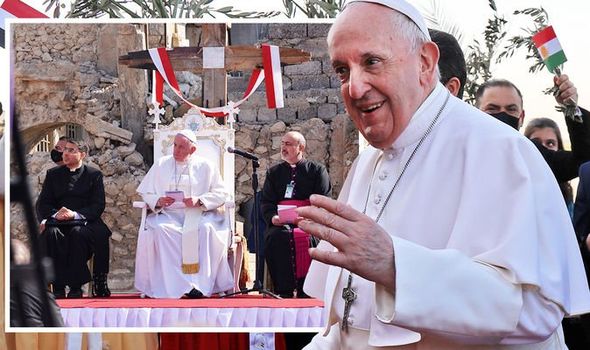 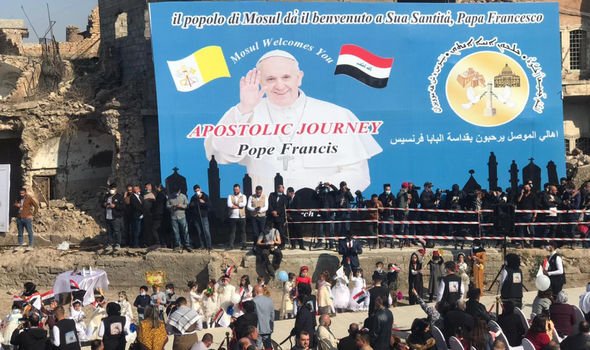 He continued: “The Pope, in the rubble of a city that came to define Islamic extremism, religious intolerance at its worst.

“It was declared just seven years ago the capital of the Islamic State’s so-called caliphate.

“It was a place where Abu Bakr al-Baghdadi, clad in black in a mosque not far from here, said the caliphate would stretch one day to Rome.

“Well, locals are pointing out that Rome has come to them. 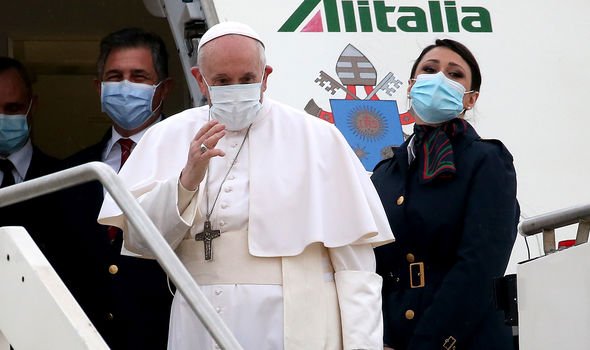 “It means so much to people, not just to Christians here but people of different faiths and no faith.

“Pope Francis was never going to cancel this part of the trip. He is a determined man.

“It was a very poignant moment for many here. The message here was an end to extremism, an end to intolerance.”

BBC Weather: Temperatures to drop to -4C in 48-hour freeze [FORECAST]
Queen ‘will win’ battle against Meghan Markle and Prince Harry [VIDEO]
Should Nigel Farage be given a knighthood? [POLL]

The Pope’s visit to northern Iraq marks the third day of his historic trip to the country.

Later today he will visit Qaraqosh to see Iraq’s largest church, which was partly destroyed by ISIS.

Iraq has one of the world’s oldest Christian communities.

However, the country’s Christian population seen its numbers plummet over the last two decades from 1.4 million to about 250,000.

Christians now make up less than one percent of the country’s population.