A text message exchange between Premier Daniel Andrews and his chief of staff on the day hotel quarantine was set up, along with other new documents from key players, has been handed to the inquiry into the program.

The inquiry held a public hearing on Friday ahead of its final report, which will be handed down by December 21, to tender a tranche of new affidavits and phone records that go to the vexed question of who decided that private security would be used. 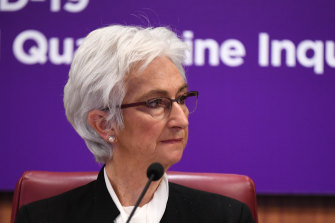 Among the new evidence are text messages between Mr Andrews and his chief of staff Lissie Ratcliff on March 27, the day the program began to be established, and telephone records from the Premier's director of policy and a senior advisor.

The March 27 phone records of former Department of Secretary and Cabinet secretary Chris Eccles are expected to be made public on Friday, as are the records of deputy secretaries Kate Houghton and Tim Ada.

The newly tendered documents are expected to be published on the inquiry's website on Friday afternoon.

The fresh evidence was sought from some of the decision-makers when information that had not been disclosed during the inquiry hearings came to light.

Mr Eccles resigned after his phone records showed contact with Mr Ashton in a key six-minute window on March 27, while Professor Sutton was asked to clarify when he found out about the use of security guards after emails were discovered that could have contradicted his evidence to the inquiry.

Department of Health and Human Services secretary Kym Peake and health minister Jenny Mikakos have also resigned in the wake of the inquiry.

Justice Jennifer Coate, who is leading the inquiry, said Friday's hearing would be the last public appearance before it hands down its final report.

The inquiry held 25 days of hearings, heard from 63 witnesses, issued 171 notices to produce and received more than 60,000 documents.

Hotel quarantine for international arrivals to Victoria is set to resume from December 7.

The Premier has ruled out home quarantine, which was one of the recommendations of the inquiry's interim report, in favour of hotels again.

"There is not a view at national cabinet level that home quarantine is an appropriate response to the risk we face at the moment," Mr Andrews said this week.

The state will instead use a modified version of its original hotel quarantine program, this time involving police on site and Alfred Health assisting with running the scheme.

In her interim report handed down earlier this month Justice Coate recommended that any restarted quarantine program have a dedicated workforce whose employees did not work across multiple hotels or in other jobs with each facility having its own contact tracing team, infection control specialists and a site manager.

The inquiry was called after COVID-19 spread from international arrivals quarantined in the hotels, to about 30 security guards and into the community. Genomic sequencing data submitted to the inquiry linked 99 per cent of the state's second outbreak of cases to two hotels, Rydges and the Stamford Plaza.