Prince Charles has revealed plans to build a luxury wedding venue in the grounds of the ‘haunted’ Scottish stately home that Camilla refused to set foot in for years.

The state-of-the-art pavilion is set to be built at Dumfries House near Cumnock, Ayrshire, to allow the stately home to offer high-end wedding packages.

Weddings are currently held in the Tapestry Room of the historic house, with receptions taking place in a marquee erected next to the main house.

However, the current marquee is thought to detract from the character of the Grade A-listed building, with the new venue set to be built in surrounding woodland. 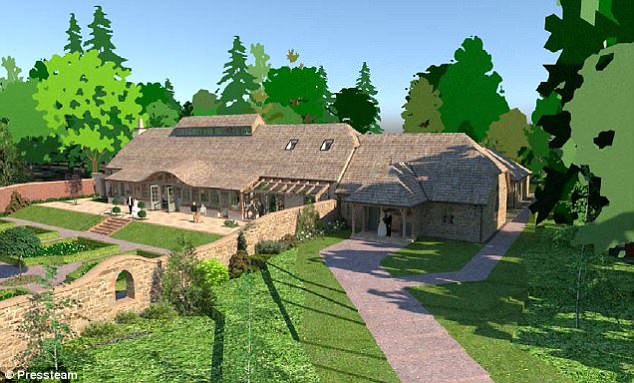 Prince Charles has revealed plans to build a luxury wedding venue (pictured in an artist’s drawing) in the grounds of the ‘haunted’ Scottish stately home Dumfries House near Cumnock, Ayrshire 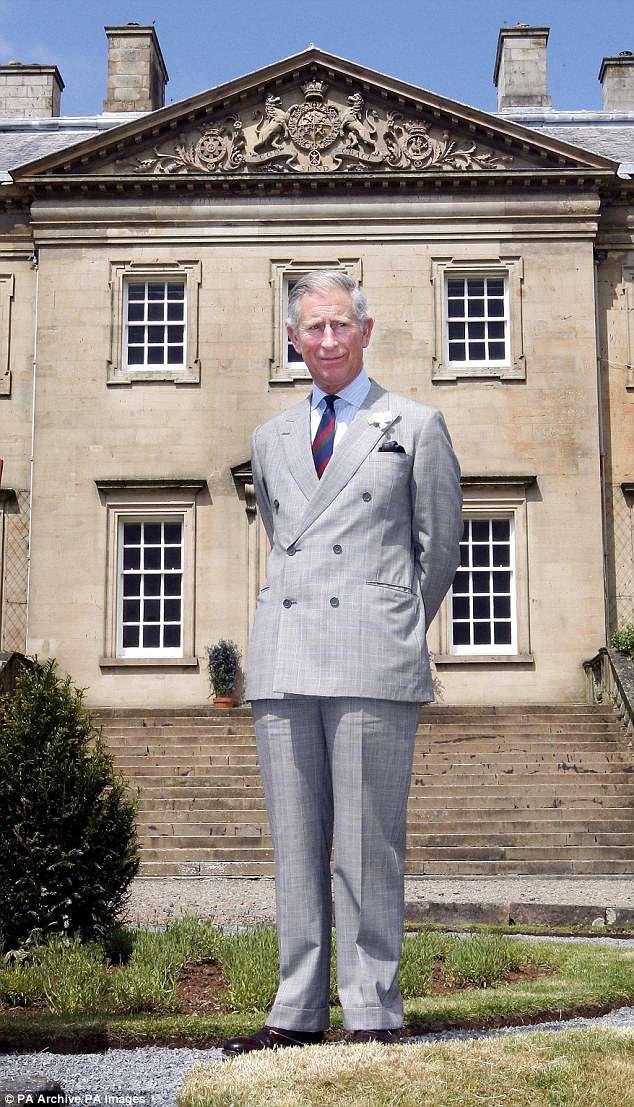 The new proposed building will cater for up to 200 guests, with plans to also build a new walled garden next to it.

The Prince of Wales, whose son Prince Harry will marry Meghan Markle at St George’s Chapel in Windsor on Saturday, helped arrange a £45million deal to buy Dumfries House and its collection of Chippendale furniture for the nation.

He led a consortium of charities and the Scottish Government to make the purchase in 2007, with his own charitable foundation contributing £20million towards the purchase.

The new plans have been lodged with East Ayrshire Council by The Prince’s Foundation and a decision is expected to be made next month.

A design statement submitted by the prince’s representatives states: ‘Event hosting is vitally important to the survival of all that goes on within Dumfries House Estate and farther afield.

‘Income generated by wedding and corporate event hosting is essential to the day to day running of the Estate and the wide range of educational programmes that run throughout the year. 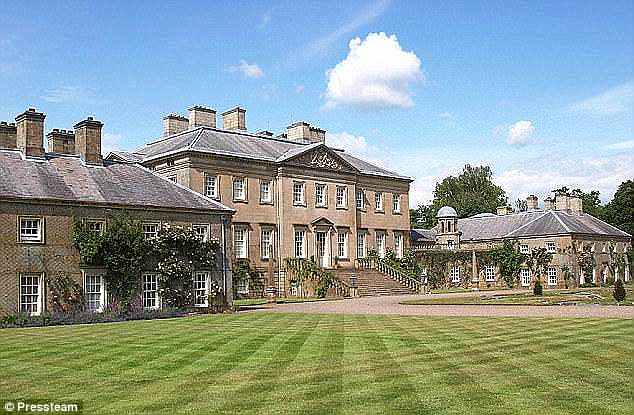 Weddings are currently held in the Tapestry Room of the historic house (pictured), with receptions taking place in a marquee erected next to the main house 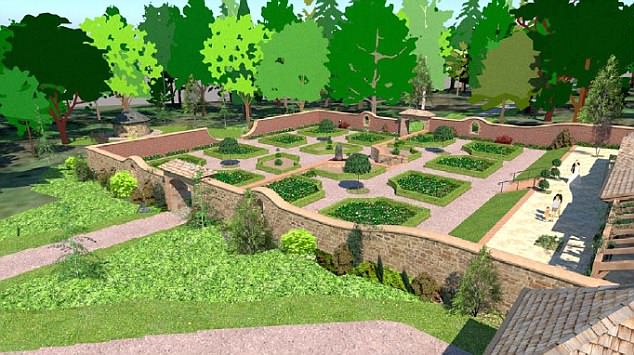 As well as a pavilion for wedding receptions, there are also plans to build a walled garden (above, in an artist’s drawing) 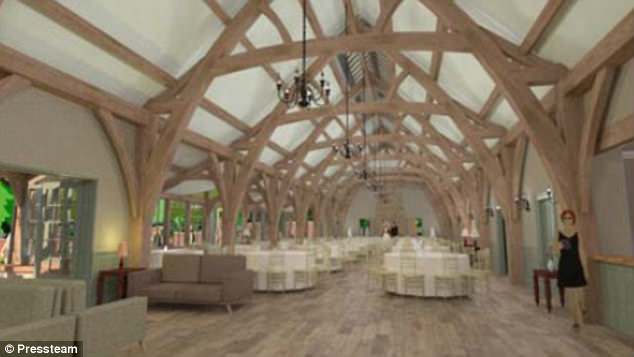 The proposed wedding venue, set to be built in the grounds of the historic house, will cater for up to 200 guests

‘The primary function of the new pavilion is to provide a venue for weddings, unique in character and of the highest quality.

‘The reception and banqueting spaces will accommodate up to 200 guests, with state of the art facilities to the rear providing service and support.

What’s the history of Dumfries House?

Dumfries House was built in the 1750s for William Dalrymple, the 5th Earl of Dumfries, by architects John and Robert Adam.

The neoclassical country house, which is located in Ayrshire, Scotland, was inherited by the 2nd Marquess of Bute and remained in the family for 200 years.

In 2007, the mansion was sold to the nation for £45m by John Crichton-Stuart, 7th Marquess of Bute, due to the cost of upkeep.

The historic house was bought by a consortium headed by Prince Charles’ Charities Foundation.

‘As part of the wedding venue, the external space created around the pavilion is very important. The garden is an extension of the interior and provides a private area for guests to spill out onto. As viewed from inside, the gardens provide an ornamental outlook, with the backdrop of the mature woodland beyond.’

Princes Charles is also bidding to create a haven for red squirrels in the grounds of the estate.

It will be turned into a visitor attraction with raised walkways built around the squirrels’ habitat for the public to view them.

The Prince of Wales is patron of the Red Squirrel Survival Trust has previously spoken of his love of the wild animals and is keen to save them from threats to their survival.

Dumfries House, designed by the Adam brothers, was put up for sale by its former owner, the aristocrat and former F1 racing driver John Crichton-Stuart.

It opened to the public in the summer of 2008 following intensive restoration work.

Princes Charles recently merged four of his charities focusing on culture, heritage, built environment and community education into one foundation based at Dumfries House.

The Duchess of Cornwall has previously described how she couldn’t bear to visit the Prince of Wales’ Dumfries House because she sensed ghosts inside. 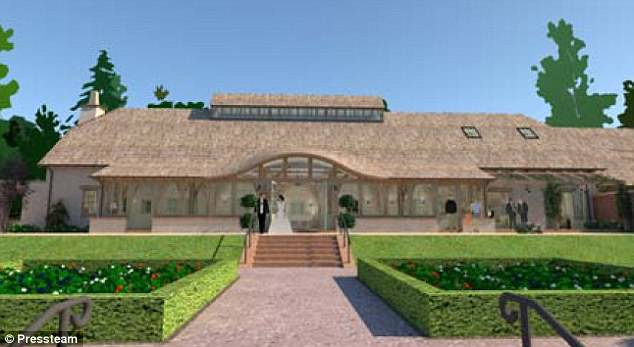 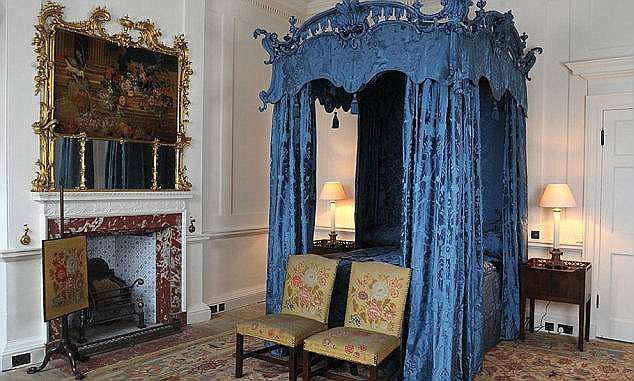 Dumfries House was built in the 1750s for William Dalrymple, the 5th Earl of Dumfries, and is known for its furniture collection 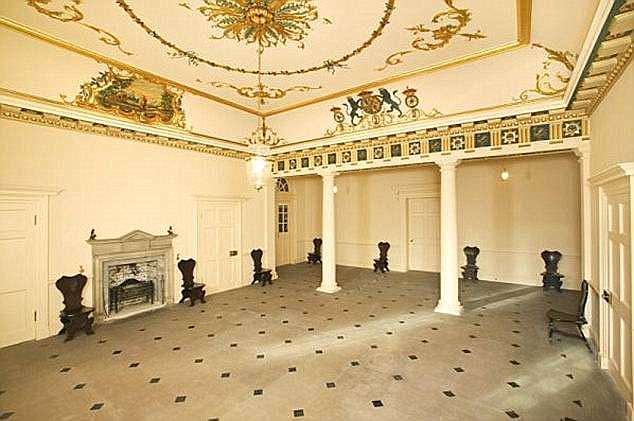 The neoclassical country house was sold to the nation for £45m by John Crichton-Stuart, 7th Marquess of Bute, due to the cost of upkeep 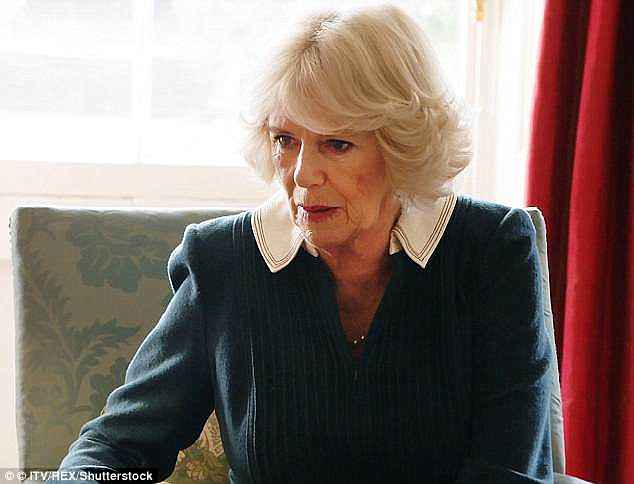 Describing seeing the stately home for the first time, Camilla said: ‘If you could have seen it when the prince first spotted it, you wouldn’t have believed it was the same house.

‘It was so sad and unlived in, unloved and neglected. And it had a really eerie feel about it. There was definitely a ghost.

‘Without a shadow of a doubt. I remember the first time I walked up the steps, got into the hall and I thought, ‘I can’t go any further.’ I literally froze.

‘If my hair could stand on end, it would have done. I remember leaving and thinking I don’t want to come back here again and I didn’t for a few years.’