London: You’d be forgiven for feeling somewhat disjointed. The mainstay of British public life for generations was not there for an event which still bears her name.

It was a Queen’s speech without a queen. In her place sat two future kings and a queen consort in waiting. It was a glimpse of things to come.

Charles may be the next monarch, but he was not afforded a throne. Instead, dressed in Admiral of the Fleet uniform rather than the robes of state, he sat in the chair his father, Prince Philip, occupied for decades – the inch-shorter consort’s throne. 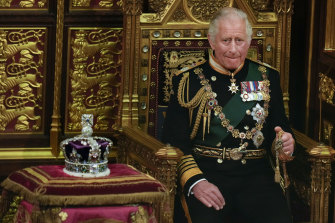 Prince Charles is seated next to the Queen’s crown during the State Opening of Parliament.Credit:AP

Instead of “My Government” he repeatedly referred to “Her Majesty’s Government” throughout the ancient House of Lords ceremony. This was no Prince regent. His mother still has her full faculties, which is stressed by all those around her. She has not surrendered her authority.

While absent, the sovereign is still very much “the boss”.

Having “reluctantly” delegated to her son and heir, citing “episodic mobility issues”, the 96-year-old watched proceedings on television from the comfort of Windsor Castle.

Charles and William may have taken over duties such as the laying of the wreath at the Cenotaph, along with the carrying out of investitures and overseas royal tours, but it is the Queen – not her son or grandson – who remains Head of the Armed Forces, Supreme Governor of the Church of England, Fount of Justice and Head of the Commonwealth.

Yet, the state opening of parliament was the most public and formal sign yet of the crown in transition, which has been quietly going on inside Buckingham Palace for several years.

It was the most significant of his mother’s roles that he has taken on to date. For the first time in two centuries, an heir to the throne read aloud the words compiled by the government.

The crucial difference in 1811 was that the future George IV was standing in for his mentally incapacitated father George III. Charles was simply deputising. 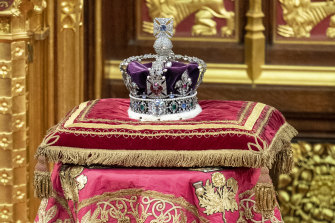 “In this year of my Platinum Jubilee, Her Majesty looks forward to the celebrations taking place across the United Kingdom and throughout the Commonwealth, and to the Commonwealth Games in Birmingham this summer,” the Prince of Wales told the Lords, making sure it was known she is down but by no means out.

Charles has long avoided overshadowing his mother with any discussions of his future reign.

As the longest-serving heir apparent in history it has taken some discipline.

For the British government it was meant to be a moment to wrestle back an agenda after a chaotic few weeks marred by scandal, sleaze, a cost of living crisis and a belting at the council elections.

These speeches in the past are events where the focus is on policy. It was a significantly scaled-back ceremony. For Royal standards, anyway.

Traditions surrounding state opening and the delivery of a speech by the monarch can be traced back as far as the 16th century. The current ceremony dates from the opening of the rebuilt Palace of Westminster in 1852 after the fire of 1834. The Queen has opened parliament all but two times during her reign. The exceptions were in 1959 and 1963, when she was pregnant with Prince Andrew and Prince Edward.

And so, the sight of Charles, with the Imperial State Crown placed on a red cushion on the table next to him, couldn’t help but distract from any substance of the agenda of Boris Johnson’s government. 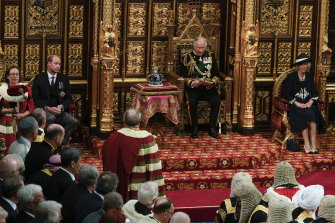 Prince Charles reads the Queen’s speech: Prince Williams to his left, and Camilla, Royal Consort to his right.Credit:Getty

Carriages were replaced with state cars and there was no Sovereign’s Escort of the Household Cavalry. No Foot Guards lined the streets. The Regalia – the Imperial State Crown, the Cap of Maintenance and Sword of State – poked from windows of the palace Bentley.

The state trumpeters sounded a royal fanfare as Charles arrived at the Sovereign’s entrance with the Duchess of Cornwall, dressed elegantly in a head-to-toe navy outfit and wearing an eye-catching navy hat with a white sash.

Charles, who has raised eyebrows for his perceived activism on issues such as the environment in the past, did not deliver the speech with his trademark sense of passion and feeling. He read the words written for his mother with detachment and a sense of duty. 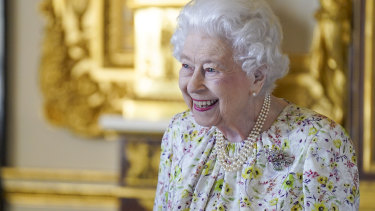 The Queen, after 70 years, may still reign over us but the question must be asked if she will ever return to this duty again?

The sight of a future king, more ready for his next role, left has left us in little doubt that things are soon about to change forever.