Private becomes public for politicians in a changed world

Prior to the Four Corners expose, ‘Inside the Canberra Bubble’, going to air, ABC chair Ita Buttrose made a difficult judgment call. The Morrison government had applied “extreme and unrelenting” pressure on the national broadcaster to pull the program. In recent years, the ABC has repeatedly caved in to governmental pressure. On this occasion it courageously held its ground. 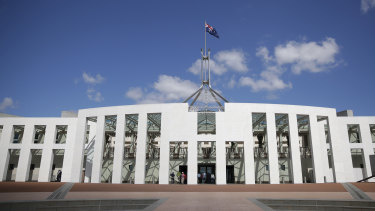 Buttrose was right to take the decision that she did but that will be cold comfort. With this government’s tendency to protect its allies from proper scrutiny and punish those who hold it to account, the denouement for the ABC is clear. It will be punished yet again with further funding cuts in due course.

What has clearly emerged since the program went to air is that the program met the public interest test but we can’t agree on how it did so. For Centre Alliance MP Rex Patrick, adulterous ministers pose questions of integrity and national security. He argued that “behaviour such as that reported here involves serious risk of compromise. Ministers must conduct themselves with complete integrity. The absence of a security checking process for ministers is a serious omission in Australia’s national security.” On that basis, adulterous affairs and even flirtations by ministers are fair game.

Journalist Bernard Keane defended the broadcast of revelations about Attorney-General Christian Porter as suitable punishment for Porter’s authorisation of the prosecution of Witness K and Bernard Collaery. “The idea that this party boy, while engaging in such compromising behaviour, is persecuting and harassing two patriots who have served their country so well on the basis that they are a threat to national security is utterly sickening,” Keane fumed. 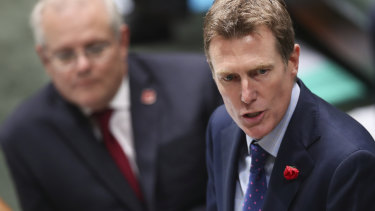 Greens Senator Larissa Waters proclaimed “Parliament’s #MeToo moment”. Waters was not the first to conflate a campaign against sexual assault and sexual harassment with complex issues about consensual sex and won’t be the last. When moral panic sets in, the boundaries blur.

Others have welcomed the exposure of a culture of misogyny at the heart of our political establishment. For some, the mere fact of adultery was enough to pass the test.

In fact, there were many reasons that the broadcast satisfied the public interest test. As the courageous Rachelle Miller attested on Four Corners, ministers and their colleagues can mistreat staffers both during and after the end of a consensual relationship with little consequence. Miller is pursuing bullying and victimisation claims against both Tudge and Michaelia Cash. A systemic mistreatment of political staffers, and in particular women staffers, is a legitimate matter for media reporting. Like judges’ associates, political staffers work in an unusual subculture that makes them particularly vulnerable to mistreatment. 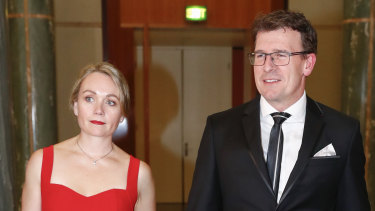 Rachelle Miller and Alan Tudge in 2017, the year the couple had an affair.Credit:Alex Ellinghausen

Long before Queensland MP John Dowling photographed his penis resting quietly in a glass of red wine and sent it to his lover, politicians’ sex lives have been considered fair game for the media. In July 2002, Laurie Oakes controversially exposed the “grand consuming passion” between politicians Gareth Evans and Cheryl Kernot after Kernot omitted it from an autobiographical book.

It is clearly in the public interest to expose politicians’ hypocrisy. Politicians use their families, their religious affiliation and pious proclamations of their values to signal their virtue and garner political support. There is a long line of conservative politicians who have condemned “the homosexual lifestyle” only to be exposed as enthusiastic participants in it.

Both Porter and Tudge had showcased their families to further their political careers. However, Tudge’s hypocrisy is multi-faceted. He has espoused his attachment to traditional family values in justifying his opposition to same sex marriage. He has also recently spearheaded a new “values test” for Australian citizenship that emphasises “mutual respect” and “equality of opportunity”. And in early 2017 he punished Andie Fox, a blogger who had criticised the (now discredited) robodebt scheme, by authorising the public release of information about her personal life and financial affairs.

After the Four Corners expose on the Canberra Bubble, have we crossed the rubicon on fornication and politics? Are the consensual sex lives of our politicians now a matter of the public interest and if so, is this progress?

To be clear, that train left the station well before Four Corners went to air. When Malcolm Turnbull introduced the bonk ban, the contours of the public interest were radically changed. The sex lives of government ministers – at least with their staff – became a matter of public interest. The fact that Turnbull was driven to introduce this policy change by the behaviour of Tudge, Porter and Barnaby Joyce also supported Ita Buttrose’s decision to give the green light to the broadcast.

In recent days the federal Opposition has gone further and banned relationships between any of its MPs and their staff. This policy further broadens the public interest.

The regulation of consensual sexual relationships raises fiendishly difficult moral issues. An outright ban denies adult women agency over their sexual lives and choice of partner even where there is a clear asymmetry of power. Such a ban invites moral panic and inevitably dilutes the clear moral distinction between sexual harassment and assault on the one hand and consensual sex on the other. Turnbull justifies his decision by insisting that he was following the standards set by the private sector. However most businesses don’t ban consensual relationships; they require disclosure in certain circumstances. More importantly, if we have ceded the determination of difficult moral issues to the private sector, the future is very bleak indeed. See AMP, Rio Tinto, Crown Resorts etc etc.

While Tudge has apologised for his treatment of his family and Rachelle Miller, Porter has responded by threatening a defamation suit and claiming that he was treated unfairly. To be clear, Porter will not pursue a defamation lawsuit. His claim to unfairness is also problematic. In the digital era, a married minister canoodling with a staffer in public, and in particular at a venue called Public, is leading with his chin. The tech revolution has dramatically reduced our private lives and correspondingly enlarged the public interest. One photograph from an iPhone posted on social media is all that it takes.