Pro surfer is stalked by a 1.5 metre shark while surfing

Frightening footage shows a great white shark swim within centimeters of a professional surfer before being scared off by an emergency alarm.

The lifesaving drone captured the moment Matt Wilkinson was stalked by the animal while surfing off Sharpes Beach, Ballina in Northern NSW.

Footage shows the shark approach the surfer’s legs before darting away at the last second as the drone let off a warning sound.

The close encounter was caught on camera by Surf Life Saving New South Wales, who operate the drone service to monitor beaches around the Ballina area. 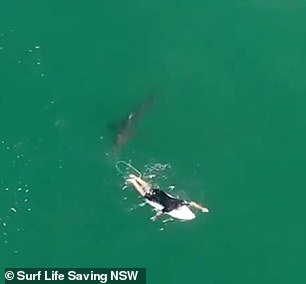 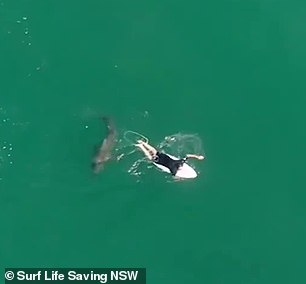 The pro surfer said he overheard the warning but he was still shocked to encounter the shark at such close range.

‘I heard a splash and a noise and looked around and couldn’t see anything,’ he said.

‘I got to the shore feeling a bit weird and the lifeguards showed me the footage and I realised how close it came without knowing it was there. It looks like it’s going for my leg and it’s changed its mind.’

The beach was evacuated after the shark was detected on Wednesday and closed until the following day. 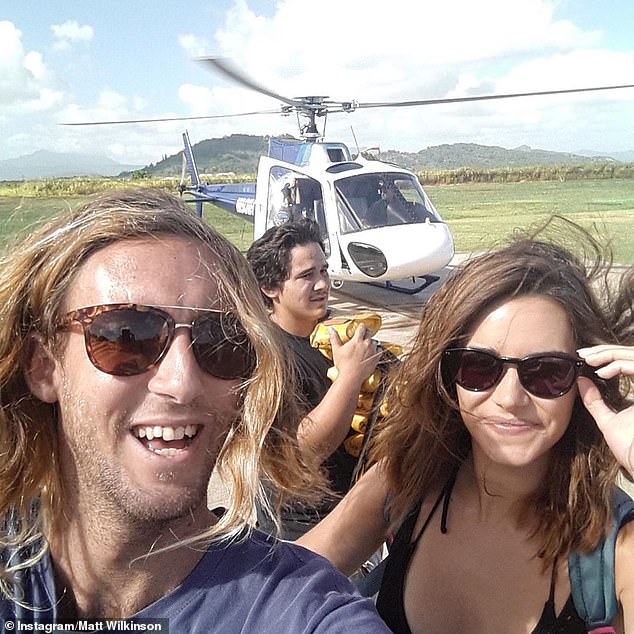 A lifesaving drone captured the moment Matt Wilkinson (pictured, with wife Anna Wilkinson) was stalked by the animal while surfing off Sharpes Beach, Ballina in Northern NSW 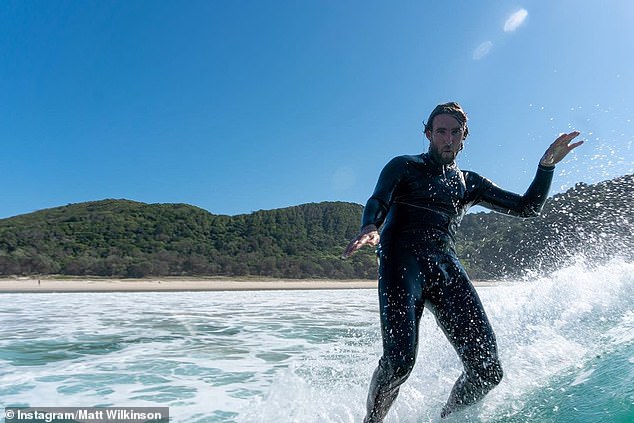 The close encounter wasn’t the first shark scare for Wilkinson, who competed on the same day Mick Fanning fought off a shark in the 2015 Jeffreys Bay Pro in South Africa.

Fanning miraculously survived when the shark knocked him off his board in a frenzied attack.

Wilkinson said he feels incredibly lucky he got out of the situation unscathed.

‘I feel grateful and pretty weird at the same time but happy it decided not to go me. When I saw the footage I saw the similarities, like I had a yellow leg rope on and Mick’s board was yellow is what I was thinking about when I came in.

‘I called my wife because I didn’t want her to see the footage before I saw it. She doesn’t want me surfing for a couple of days now.’

The drone operator had just launched his seventh flight for the day when he spotted the shark near the surfer.

‘It sort of came out of nowhere, then went right up to Matt. It moved pretty fast. I was tracking it and notified the lifeguards and used the speaker on the drone to get everyone out of the water. Within 10 seconds it was at the surfer and five seconds later it was gone,’ Beau Monks from the Australian UAV Service said.

‘I’d spotted a large baitball and some whales and dolphins earlier in the day and had alerted the lifeguards to that.’

Drones were also used several weeks ago when a large shark was spotted near competitors at the Tweed Coast Pro World Surf League event at Cabarita. ‘Great unravelling’: Writer Kate Cole-Adams learnt about herself and others in lockdown
Celebrities Posts