Profile: Who is Sheikh Hasina?

Hasina, who has promised to turn Bangladesh into a middle-income nation by 2021, is set to be PM for the fourth term. 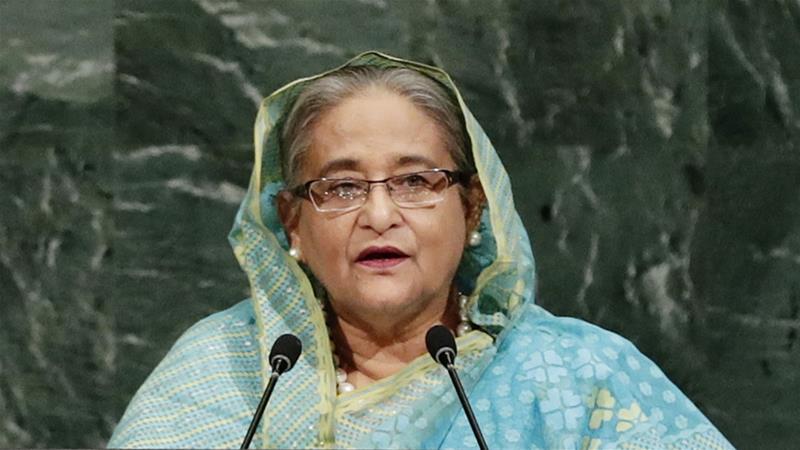 Bangladesh Prime Minister Sheikh Hasina has won a third consecutive term in office in an election contested by the opposition.

The leader of the Jatiya Oikya Front – the main opposition alliance – dubbed the election “farcical”.

“We reject the farcical election and want the election commission to hold a fresh election under a non-partisan administration,” said Kamal Hossain, an 82-year-old jurist who wrote the country’s secular constitution.

Her Awami League (AL) party is on course to get absolute majority in the 350-seat parliament called as Jatiya Sangshad. Fifty seats are reserved for women.

The AL pushed a narrative of development on the back of the rapid economic growth in the last 10 years.

The country of 160 million people has achieved near self-sufficiency in food production and raised average life expectancy to levels higher than its big neighbour India.

Since Hasina, 71, took power in 2008, Bangladesh’s per capita income has seen a three-fold increase. The country’s gross domestic product (GDP) stood at $250bn in 2017, according to the IMF, and last year clocked a growth rate of 7.28 percent.

The AL’s manifesto had promised to make Bangladesh, one of the world’s most densely populated countries, a middle-income nation by 2021 and triple its current per capita income of $1,750 in the next decade.

The garment industry has emerged as one of the main pillars of the economy, providing jobs to 4.5 million people. It makes up 14 percent of the GDP and nearly 80 percent of the country’s exports worth $35bn.

The Bangladeshi leader has led the AL party, founded by her father, since 1981.

Hasina served as prime minister from 1996 to 2001, after defeating her arch rival, Khaleda Zia, who eventually regained power in 2001.

However, their mutual dislike and distrust, played out by supporters in violent street protests, was blamed for the January 2007 crisis that prompted the military to step in, impose military rule and install a caretaker government.

Both women were arrested and jailed by the then army-backed interim government as part of its crackdown on corruption. Hasina and Zia were both eventually released in order to take part in the poll.

In 1975, most of her family were killed in a coup, including her mother, three brothers and her father, the then president Sheikh Mujibur Rahman, who led the country in its liberation struggle against Pakistan in 1971.

Hasina and her sister were abroad at the time of the 1975 assassination.

In August 2004, she survived yet another assassination attempt at a political rally. The grenade attack left more than 20 people dead and her car was peppered with bullets as she fled the scene.

Earlier this year, 19 people, including son of the main opposition leader and her bitter political rival, Zia, were jailed for life over the attack.

Known for her fiery speeches and fierce ambition, Hasina has been reduced to campaigning from behind bullet-proof glass or delivering rally speeches via video link as she faces threats to her life.

Her critics have called her authoritarian and accused her government to be behind a number of extra-judicial killings.

But her supporters say she is fighting for the people.

“Her commitment is to improve the quality of lives of people of Bangladesh. To achieve that, she has to fight against many odds, but some people think she is authoritarian, but it’s not. She is fighting for the people, not for the vested interests.”

She has also won praise for the handling the world’s biggest refugee crisis. Nearly one million Rohingya have taken refugee in Bangladesh after fleeing for their lives in Myanmar.

The Awami League is Bangladesh’s oldest party and was formed in 1948 after the foundation of East Pakistan – as the country was known before gaining independence from Pakistan. The party is widely regarded as being broadly pro-India.

Her supporters say she is committed to improve the lives of Bangladeshis.

“She is workaholic, I do not know how she manages her time. She comes across as well informed,” said Noor, the culture minister.

“She starts her day very early with morning prayers and then she goes for the official work. She works until midnight and meets party leaders almost daily.”

If the victory is officially sanctioned, she will serve as the prime minister for the fourth term – a record for any Bangladeshi leader since it was born in 1971.