Prosecutor blasts cops who ‘chose to do nothing’ as George Floyd died under Chauvin’s knee as federal hate crimes trial closes: Accuses Tou Thao of helping press the dying black man further into the ground

Disturbing allegations against J Alexander Kueng, Thomas Lane and Tou Thao were outlined by federal prosecutor Manda Sertich as she made closing remarks at the trio’s federal civil rights trial.

Sertich said that Kueng knelt on Floyd’s back while Chauvin was kneeling on the security guard’s neck during his final moments in Minneapolis during the May 2020 arrest that killed him.

Thomas Lane was holding Floyd’s legs at the same time, Sertich said, while Thao was holding back bystanders, as all three cops ignored bystanders’ pleas to leave Floyd alone.

Sertich said the men ‘chose to do nothing’ as Chauvin killed Floyd, and that they’d therefore proven themselves guilty of violating the victim’s civil right to medical care. 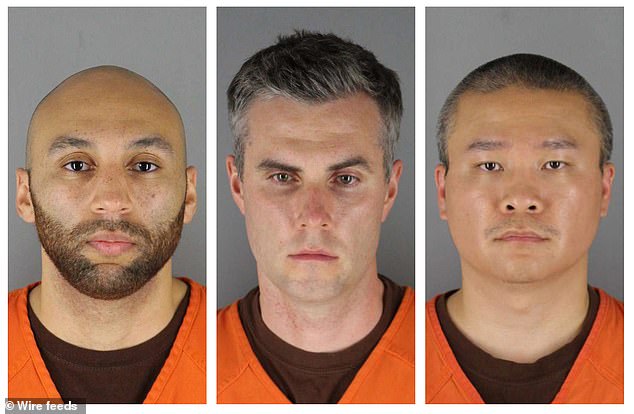 Prosecutor Manda Sertich blasted J Alexander Kueng (left), Thomas Lane (middle), and Tou Thao (right) during the closing arguments of trial for their involvement in the death of George Floyd in 2020

Thao stared directly at Officer Derek Chauvin as he knelt on Floyd’s neck for 9.5 minutes, Sertich said, noting that Thao also ignored bystanders’ pleas to help a man who was dying ‘right before their eyes.’

She said Kueng casually picked gravel from a police SUV’s tire as Chauvin ‘mocked George Floyd’s pleas by saying it took a heck of a lot of oxygen to keep talking.’

And Lane’s remarks showed that he knew Floyd was in distress but ‘did nothing to give Mr. Floyd the medical aid he knew Mr. Floyd so desperately needed,’ the prosecutor said.

All three are charged with depriving Floyd of his right to medical care. They face a separate trial for aiding and abetting manslaughter at a Minnesota state court, which has yet to begin.

Chauvin admitted civil rights crimes at his separate trial in December 2021, and was convicted of Floyd’s murder at a Minneapolis court in April 2021. 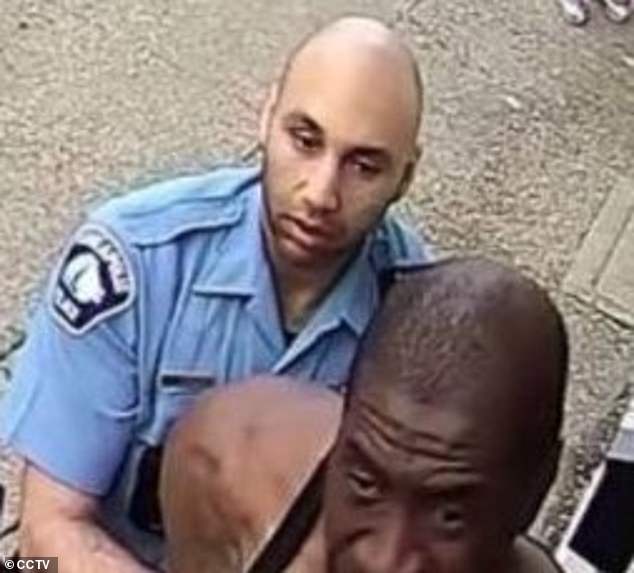 Keung (pictured with Floyd) knelt on Floyd’s back while Derek Chauvin, who pleaded guilty in December, knelt on his neck 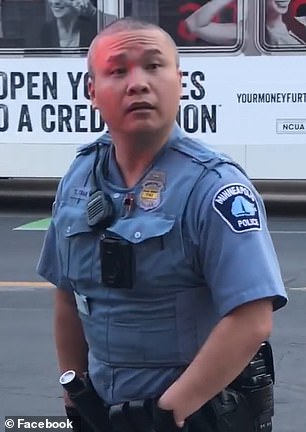 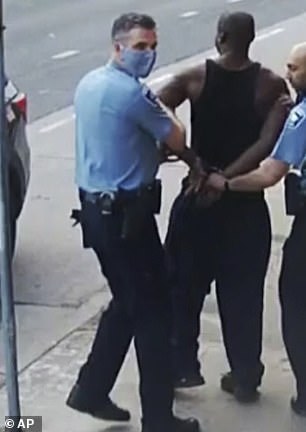 Kueng and Thao are also charged with failing to intervene to stop Chauvin during the May 25, 2020, killing that triggered protests worldwide and a reexamination of racism and policing.

Prosecutors have argued that the officers violated their training by not rolling Floyd onto his side or giving him CPR, and by not intervening to stop Chauvin.

‘They chose to do nothing, and their choice resulted in Mr. Floyd’s death,’ she said.

Defense attorneys argued that the Minneapolis Police Department’s training was inadequate. They also attacked a police culture that they said teaches officers to defer to their seniors, saying that Chauvin called all the shots at the scene. Lane and Kueng, who were both rookies, argued that they deferred to Chauvin. 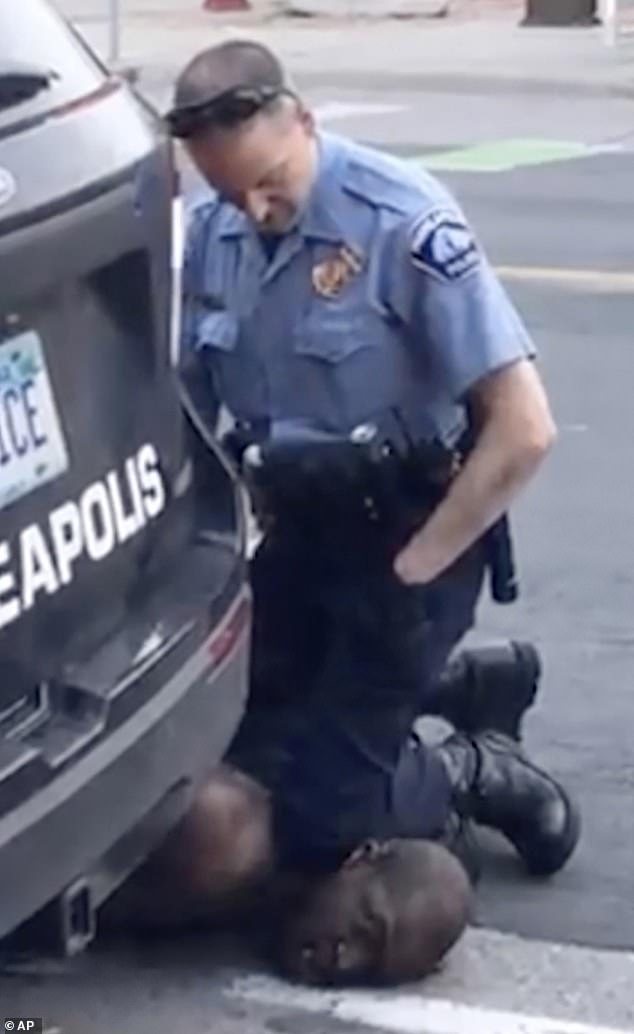 Floyd was killed after Chauvin kneeled on his neck, blocking his airways and causing him to lose consciousness

But Sertich rejected those arguments, stating: ‘Officer Chauvin isn’t ordering these defendants around, he’s barely talking to them,’ she said. ‘The officers knew George Floyd couldn’t breathe, and [he] was dying.’

Sertich said it was ‘every officers’ job’ to intervene on the scene, even if they are considered rookies and pointed out that bystanders – who do not take an oath to serve like police officers – knew something was wrong.

‘The people standing there were, in fact, doing more than the officers.’

The prosecutor also said the court could prove that Kueng and Thao failed to intervene because they could see unreasonable forcing being used against Floyd, but failed to take ‘responsible steps’ to do so.

Lane is not being charged with failure to intervene as he is the only defendant who asked to roll Floyd over.

She also argued that the court does not need to prove that Kueng and Thao intended for Floyd to die.

‘You do not have to believe Kueng’s assertions that Chauvin could fire him,’ she said.

The prosecutor ran through the elements necessary to prove that Thao and Kueng failed to intervene, saying they did nothing, ‘not one statement, not one gesture, not one physical intervention,’ to stop Chauvin. She also highlighted Thao’s status as a veteran officer: ‘He certainly had the means to save Chauvin from himself.’

Both counts include language that the officers ‘willfully’ deprived Floyd of his constitutional rights. Sertich told jurors the government doesn’t have to prove the officers acted with ill will toward Floyd or intended to hurt him.

Sertich contrasted the officers’ inaction with the desperate cries of bystanders pleading with them to get off Floyd and to check for a pulse. She said: ‘Even though they had no power, no authority, no obligation, they knew they had to do something.’

Those bystanders, Sertich said, gave Thao and Kueng ‘play by play commentary’ that should have raised their awareness that Floyd was in trouble – shouting that Floyd could not breathe, that he wasn’t responsive and urging the officers to look at him.

‘Anyone can recognize that someone with a knee on their neck, who has slowly lost their ability to speak, stopped moving and has gone unconscious has a serious medical need,’ Sertich said, urging jurors to review videos of what happened, including a widely seen bystander video, that she said show more than what any witness could describe.

During the trial, Lane testified that he asked twice if Floyd should be rolled over but was rebuffed, and that he held his position because an ambulance was on the way.

Sertich said the officers should have performed CPR on the victim instead of waiting for emergency services to arrive.

Kueng testified that Chauvin was his former training officer and that he had considerable sway over his career. He said he trusted Chauvin’s advice.

Thao testified that he was watching the bystanders and he trusted that the officers behind him were caring for Floyd.

Sertich also argued that Lane and Kueng ‘lied’ during post-incident reports by not giving the full picture and failed to include that Floyd had lost consciousness and had no pulse. She said the two officers knew what they did was wrong and that’s why they left certain elements out. 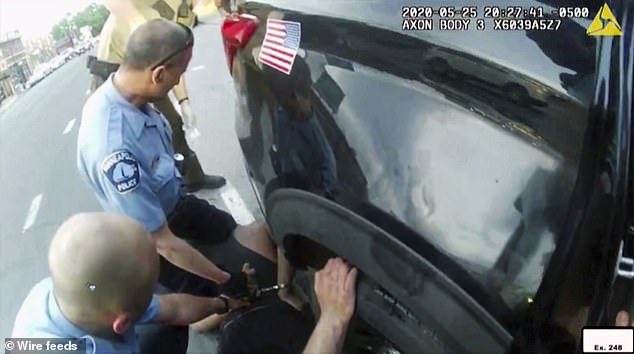 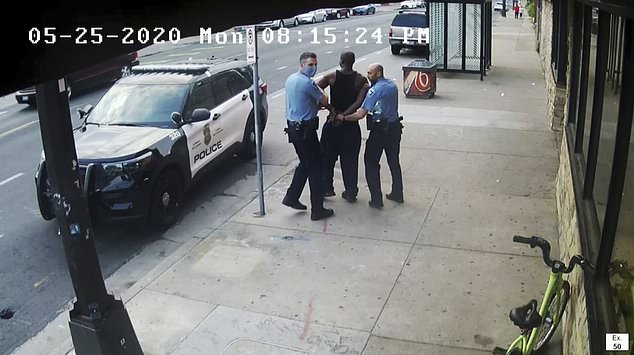 She also said there was ‘no respect for the sanctity of life.’

She continued: ‘They choose not to intervene as the window of George Floyd’s life slammed shut. The defendants are guilty as charged.’

Defense attorney Robert Paule argued that a loss of life is ‘tragic’ but does that necessarily equate to a crime.

Paule also argued that there is ‘no burden whatsoever on the defendant,’ but on the government. He also told the jury to bring ‘reason and common sense’ to the deliberations, according to CBS Minnesota.

He also argued that Thao and Chauvin continued to the scene after being called off because Kueng and Lane were rookies. When Thao arrived, Kueng had already began to put Floyd in the cop car and that the jury needed to keep in mind what information Thao had at the time of arrival.

Chauvin pleaded guilty in the federal case in December, months after he was convicted of state murder and manslaughter charges.

Closing arguments in the current trial were expected to take most of Tuesday before the case goes to the jury.

At the start of the trial, US District Judge Paul Magnuson selected 18 jurors, including six alternates. Fourteen remain – 12 who will deliberate and two alternates. The court did not release demographic information, but the jury appeared largely white.

Lane, who is white, Kueng, who is Black, and Thao, who is Hmong American, also face a separate trial in June on state charges alleging that they aided and abetted murder and manslaughter.

The trial was wrapping up just as another major civil rights trial in Georgia resulted in the conviction of three white men on hate crimes charges in the death of Ahmaud Arbery, a 25-year-old black man who was chased and shot in February 2020.