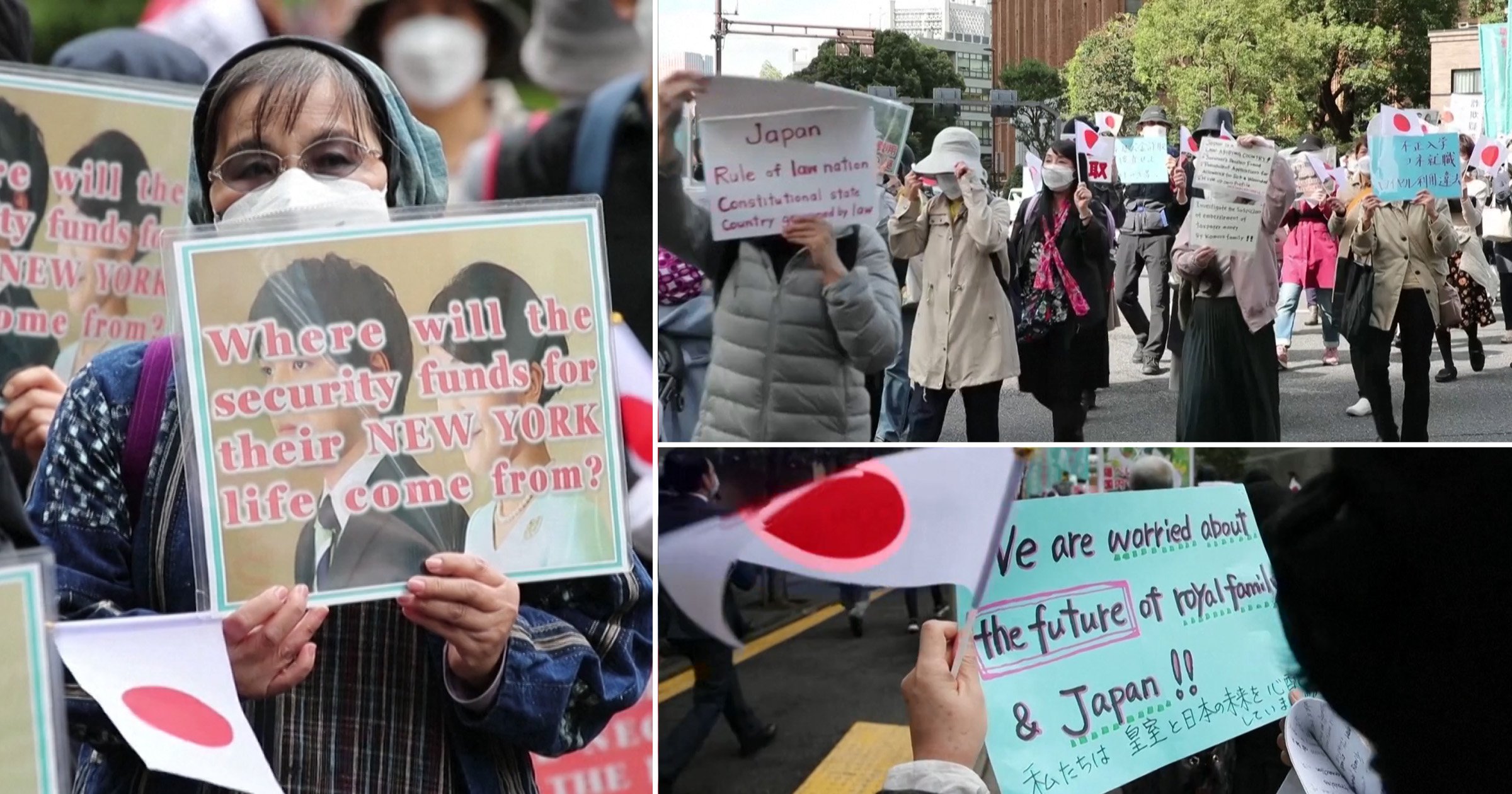 Protesters have demonstrated against the marriage of a Japanese Princess, who has left the royal family to marry a commoner.

But on Tuesday, the niece of the emperor married commoner Kei Komuro, giving up her royal title in the process and saying she was determined to build a happy life with her ‘irreplaceable’ husband.

The pair – who are both 30 – finally tied the knot after a tumultuous four-year engagement plagued by money scandals and intrusion into their private life.

Now demonstrators have taken to the streets of the capital saying they are worried about the future of Japan and the Royal Family.

They carried signs written in English reading: ‘Where will the security funds for their New York life come from’ and ‘Japan rule of law nation’.

More than a 100 protesters marched through central Tokyo against the wedding.

32-year-old part-time worker Midori Adachi said: ‘More than 100 people are marching today because we want to tell the truth about how troublesome this marriage is, and I don’t want the imperial family to be involved in crimes.’

But in an unusually frank joint news conference with her new husband, Mako said ‘incorrect’ news reports about Komuro had caused her great sadness, stress and fear.

Mako, who will known be known as Mako Komuro in line with Japanese law, added: ‘I understand there are various thoughts on my marriage with Kei.

‘I am very sorry to the people who had trouble (with our marriage).’

During the press conference, Komuro said he loved Mako and pledged to support and protect her – unusually open language for anyone connected to Japanese royalty.

They were married in the morning after an official from the Imperial Household Agency (IHA), which runs the family’s lives, submitted paperwork to a local office registering their marriage.

The couple broke with tradition by dropping the rituals and ceremonies usually seen in royal weddings, including a reception.

And Mako also refused a one-off payment of around $1.3 million typically made to royal women who leave the imperial family after getting married.

Japan had initially welcomed the couple’s engagement announcement in 2017, but the tone quickly changed, when tabloids reported on a money scandal involving Komuro’s mother.

The press and public mood then turned against Komuro and the marriage was postponed.

He left Japan to study law in New York in 2018 and returned last month.

But he will return when the couple move to New York, after Mako applies for the first passport of her life.