About 500 protesters gathered on Sunday at the start of the AIPAC conference, demanding the event be shut down. 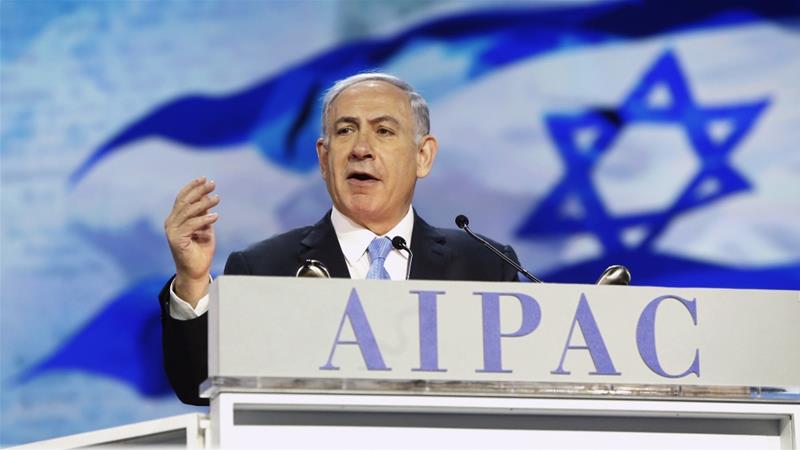 Washington DC – About 500 protesters gathered on Sunday at the start of the AIPAC conference demanding the week-long event be shut down.

AIPAC, which runs from Sunday through Tuesday in Washington DC, is an influential political conference that brings pro-Israel lobbyists and US lawmakers together to discuss future US policy on Israel.

“Hey hey, ho ho, AIPAC has got to go,” the mostly young and energetic protesters shouted while banging on barriers separating them from the entrance of convention centre where the event is taking place.

“Palestine will be free from the river to the sea,” they chanted.

Mariam Ghazaleh, a Palestinian-American protester, told Al Jazeera she came out to demonstrate against AIPAC and demand justice and freedom for Palestine.

“We are here today to show the world that the Palestinian cause will never die,” she said

For Abbas Hamidah, the leader of the protest, the turnout was proof that Palestinian Americans and their supporters are determined to show their support and solidarity for the Palestinian cause.

Among them were people holding photos of Ahed Tamimi, the 17-year old Palestinian who was arrested for kicking and slapping two Israeli soldiers in the Occupied West Bank.

Eric Resnick, a Jewish-American protester from Canton, Ohio who lost family in the Holocaust, told Al Jazeera “my family did not die to justify what these sick Zionists are doing to Palestine”.

His sentiment was supported by Rabbi Yisroel Weiss of Jews United against Zionism.

He told Al Jazeera Zionists have no right to steal the Jewish name, let alone speak on behalf of Jews.

“We as Jews want to live in peace and harmony with our Palestinian neighbours as we have done for hundreds of years before the Zionist project destroyed Palestine,” he said.

The three day AIPAC conference has been the stage for prominent pro-Israel figures for years.

This year’s event will have speeches by some of the most prominent Israeli and US politicians, including Israeli Prime Minister Benjamin Netanyahu, Democratic House of Representative and Senate minority leaders Nancy Pelosi and Chuck Schumer, Republican Senate majority leader Mitch McConnell, and former Republican presidential candidate Marco Rubio.