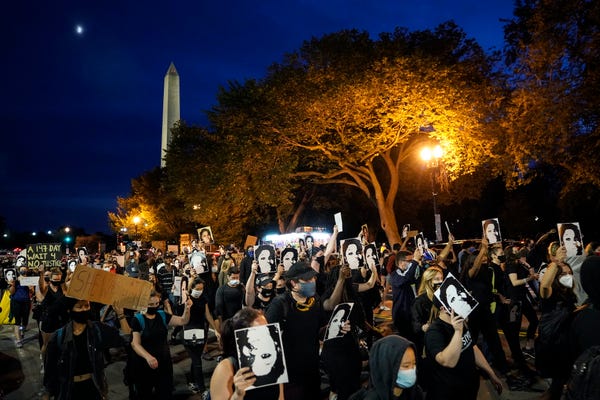 In Louisville, where Taylor was killed, two police officers were shot responding to a report of gunfire near the protests Wednesday night. 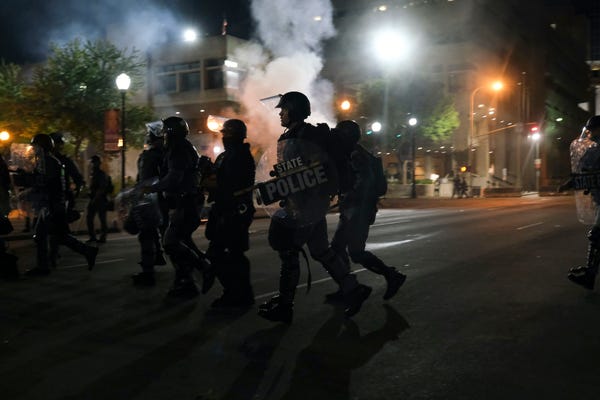 President Donald Trump tweeted that he was "praying for the two officers."

According to WDRB, the shootings occurred sometime before 8:30 p.m. This was around the time the police started using flash-bang devices to break up the remaining protesters, ahead of a 9 p.m. curfew imposed by the mayor in anticipation of the indictment's release, according to the Courier Journal.

Louisville Metro Police Department officials told the newspaper that 46 people were arrested during the protests on Wednesday.

A protest in Portland turned into a riot, with some throwing Molotov cocktails at officers and police vehicles. 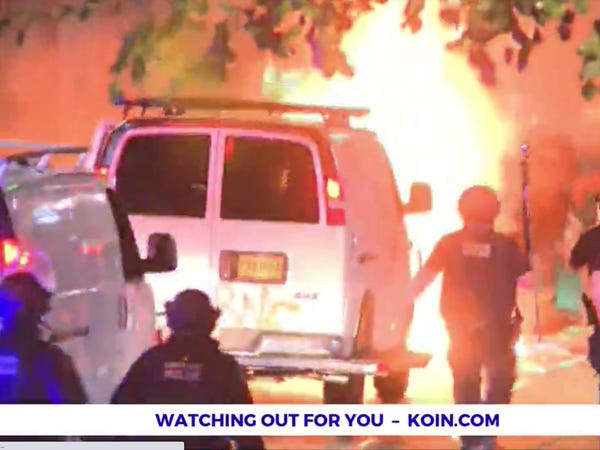 Officers said protesters also threw rocks at upper glass windows of the precinct,  according to KOIN.

The Oregonian reported that police shot impact munitions at the crowd shortly before 10 p.m.

A driver was detained in Denver after accelerating through a group of Breonna Taylor protesters and hitting one demonstrator. 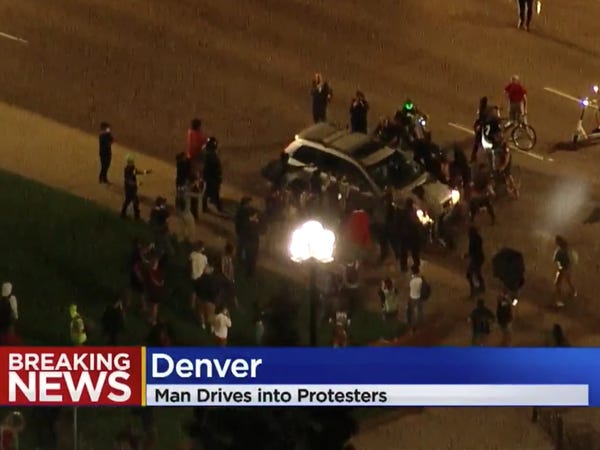 The Denver Channel reported that police took the unidentified male driver into custody seconds after the incident, though authorities have not officially announced any charges against him.

The protester who was hit by his vehicle, who only wished to be identified as Kate, told the news station that she was not badly hurt.

Georgia Patrol Troopers used tear gas to try to break up a crowd of protesters who gathered outside the state Capitol in Atlanta, and a "number of arrests" were made. 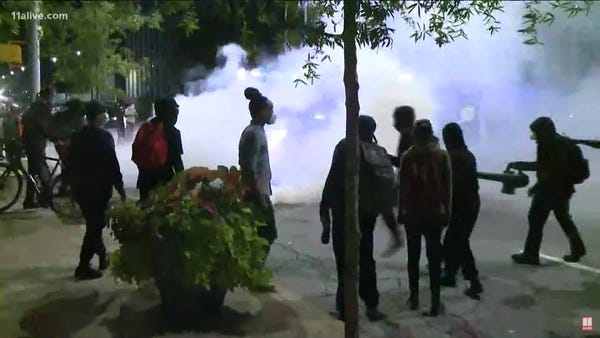 "We can confirm there have been a number of arrests made and will be able to provide a final tally for you tomorrow," Atlanta Police said in a statement Wednesday night, according to 11 Alive. 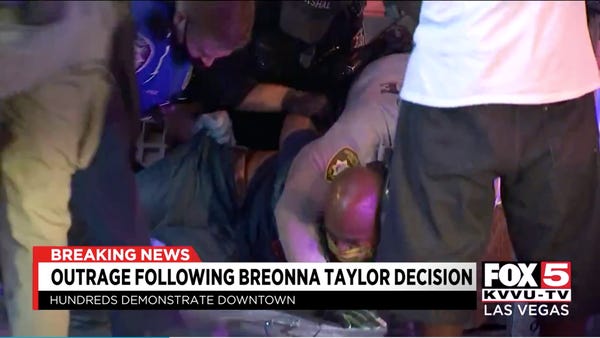 Metro Lt. Frank Humel told the Las Vegas Review-Journal that about 150 people participated in the Breonna Taylor march on Wednesday.

Footage captured by KVVU shows police officers tackling a Black protester to the ground to arrest him during a clash between protesters and police. A KVVU reporter said that the clash only lasted about 10 minutes before things calmed down.

At one point during the march, about 75 people took over the intersection of Las Vegas Boulevard and Fremont Street to kneel for a moment of silence, according to the Review-Journal.

Thousands took part in multiple protests in New York City, with the largest group at one point marching over the Manhattan bridge and bringing traffic to a standstill. 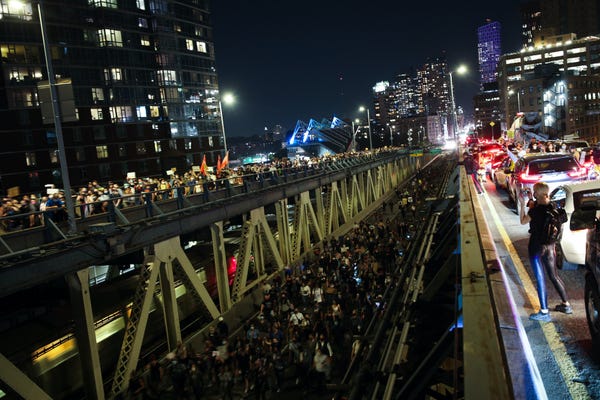 According to CBS New York, the protests were peaceful. The NYPD tailed the protestors, but did not make any arrests.

Hundreds of people also protested in honor of Taylor outside the Barclays Center in Brooklyn, New York.

In Washington, DC, hundreds of protesters carrying pictures of Taylor marched from the Department of Justice to Black Lives Matter Plaza, near the White House.

According to NBC Washington, the main protest downtown was peaceful, but there were some reports of vandalism in Dupont Circle.

However, it is not clear if the windows shattered at a bank and at a Starbucks shop were related to the protests, the news station reported.

About 300 people gathered outside Philadelphia's City Hall and then marched through the city, while the mayor called for peaceful protests. 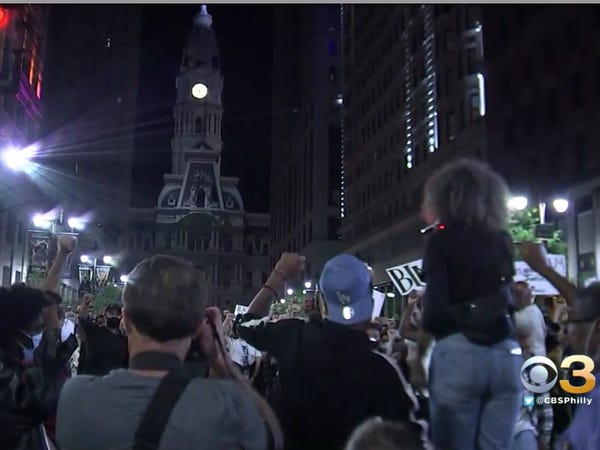 Police presence in the Center City area was stepped up in certain areas, according to the Philadelphia Inquirer.

Protesters intervened when two vandals started spray-painting an anti-police symbol on a garage during the march, NBC Philadelphia reported.

"You're part of the problem," one protester could be heard telling them in video recorded by an NBC Philadelphia reporter. 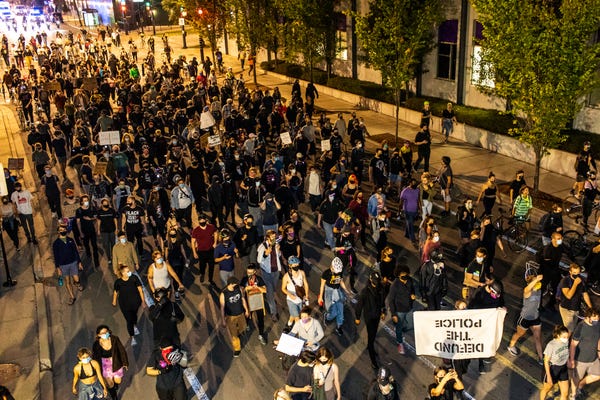 During one of the demonstrations through the city's South Side, Taylor's name was spelled out in a blood-like red paint, according to WGN.

The Illinois National Guard had been activated ahead of the Kentucky attorney general's press conference, according to the Chicago Sun-Times, but there did not appear to be any major clashes between law enforcement and protesters in Chicago on Wednesday night.