Health experts and officials have raised fears of spike in coronavirus cases after demonstrators gathered to protest the against police brutality inflicted upon African Americans following the killing of George Floyd.

More beaches, churches, schools and businesses have recently reopened worldwide, but civil unrest in the United States over repeated racial injustice is sparking concern of new coronavirus outbreaks in a country that has seen more infections and deaths than anywhere else in the world.

Atlanta Mayor Keisha Lance Bottoms warned that ‘there is still a pandemic in America that’s killing black and brown people at higher numbers.’

Speaking to residents of one of dozens of U.S. cities hit by massive protests in recent days, Bottoms said: ‘If you were out protesting last night, you probably need to go get a COVID test this week.’ 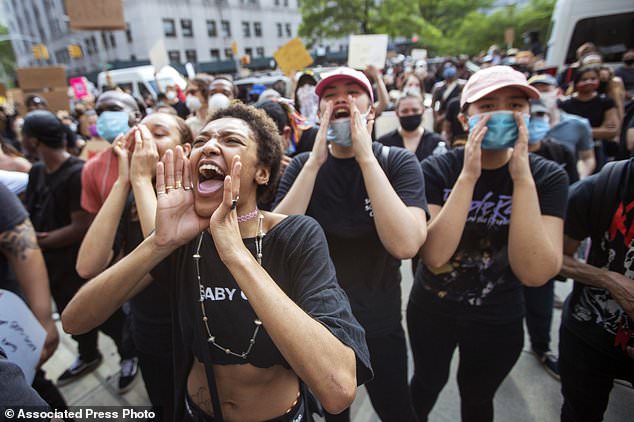 Health experts fear that silent carriers of the virus who have no symptoms could unwittingly infect others at protests where many people are without masks. Protests over the death of George Floyd have shaken the country from New York City (pictured) to Minneapolis, from Atlanta to Los Angeles 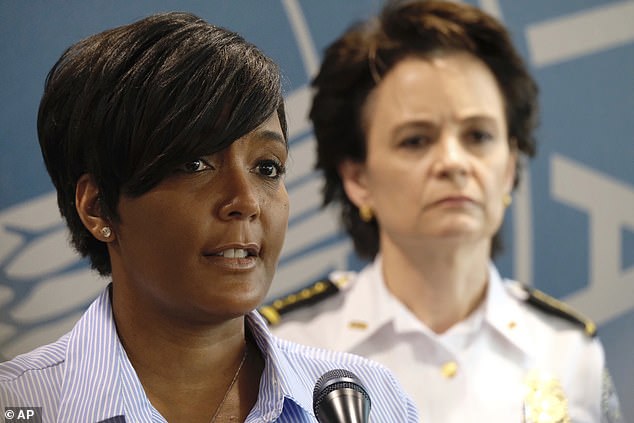 Atlanta Mayor Keisha Lance Bottoms warned: ‘If you were out protesting last night, you probably need to go get a COVID test this week’ 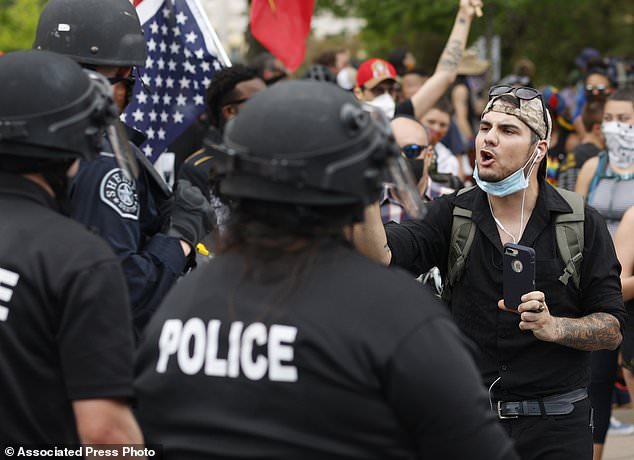 Unprotected: A participant in a protest over the death of George Floyd squares off with Denver Police officers Friday, in Denver

Protests over the death of George Floyd have shaken the country from New York City to Minneapolis, from Atlanta to Los Angeles.

Floyd, a black man, died on May 25 in Minneapolis after a white police officer pressed a knee into his neck. It was the latest in a series of deaths of black men and women at the hands of police in America.

Health experts fear that silent carriers of the virus who have no symptoms could unwittingly infect others at protests where people are packed cheek to jowl, many without masks.

‘Whether they´re fired up or not, that doesn’t prevent them from getting the virus,’ said Bradley Pollock, chairman of the Department of Public Health Sciences at the University of California, Davis.

The U.S. has seen over 1.7 million infections and nearly 104,000 deaths in the pandemic, which has disproportionately affected racial minorities in a nation that does not have universal health care.

The Minnesota health commissioner warned that the protests are almost certain to fuel new infections.

‘We have two crises that are sandwiched on top of one other,’ Minneapolis Mayor Jacob Frey said. 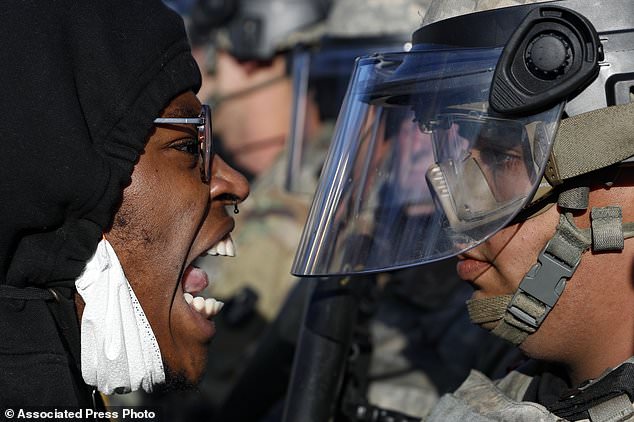 Protesters and National Guardsmen face off on East Lake Street, Friday, in St. Paul, Minnesota. Images showing thousands of screaming, unmasked protesters have sent shudders through the health community, who worry their calls for social distancing during the demonstrations are unlikely to be heard 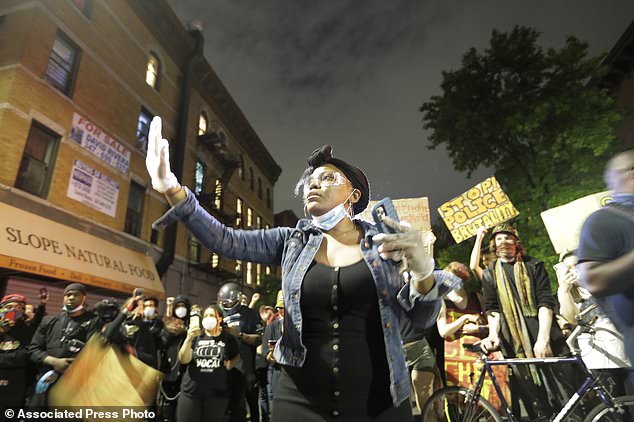 Mask down: Protestors confront Police Officers near Barclays Center after a rally over the death of George Floyd, Friday, in the Brooklyn borough of New York 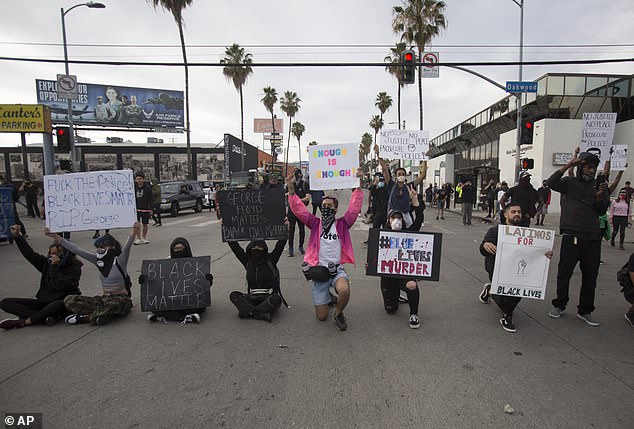 Protesters confront police officers during a protest over the death of George Floyd, a handcuffed black man in police custody in Minneapolis, in Los Angeles, Saturday. LA County reported the highest daily spike in coronavirus cases, 2,112 on Saturday. A total of 48 new deaths were reported, with 36 being people over 65 and 33 with underlying health conditions

Even for the many protesters wearing masks, those don’t guarantee protection. The U.S. Centers for Disease Control and Prevention says cloth masks keep infected people from spreading the virus but are not designed to protect wearers from getting it.

It came as Los Angeles County reported the highest daily spike in coronavirus cases, with 2,112 on Saturday.  A total of 48 new deaths were reported, with 36 being people over 65 and 33 having underlying health conditions.

Prior to that 1,843 was the biggest daily increase, reported on Tuesday.

‘The high number of cases are, in part, due to a backlog of test results being processed and also a new lab beginning to report results in a timely manner through the county’s Electronic Laboratory Reporting system,’ the health department said in a statement. 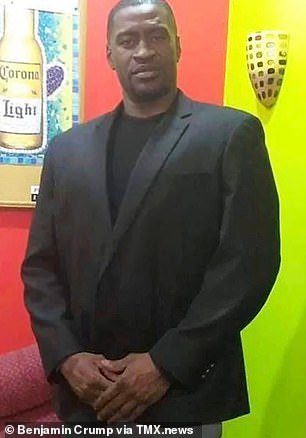 ‘Each day, we join with families and friends mourning the devastating loss of life to COVID-19 and we keep those who are grieving in our thoughts and prayers,’ Director of Public Health Barbara Ferrer said.

‘LA County is on our recovery journey, and as more businesses and spaces re-open, it has never been more important – as individuals, businesses and institutions – to use the tools that we all have to take care of each other and to continue to slow the spread of COVID-19.

‘This means practicing physical distancing, wearing cloth face coverings when in public, and adhering to all directives in the Health Officer order.’

On Sunday, many Americans were returning to in-person church services for the first time in many weeks as some emergency measures are lifted and mosques reopened across the Middle East, but in countries from India to Colombia the number of new infection was still on the rise.

In Europe, unions in Paris flouted a ban on large gatherings Saturday to protest the dire conditions facing workers in the country illegally. Police used tear gas to disperse the crowds and said they had banned the march due to health risks.

Hong Kong police have used tear gas, pepper spray and rubber bullets to break up protests in recent weeks. A ban on gatherings of more than eight people has been extended to June 4, the day of an annual candlelight vigil to mark the Chinese military’s 1989 crackdown on pro-democracy demonstrators in Beijing’s Tiananmen Square.

More than 6 million infections have been reported worldwide, with nearly 370,000 deaths, according to a tally by Johns Hopkins University. The true death toll is believed to be significantly higher, with experts saying many victims died of the virus without ever being tested.

The situation worsened Sunday in India, where new daily cases topped 8,000 for the first time and 193 more deaths were reported. India still is easing restrictions on shops and public transport in more states beginning Monday, although subways and schools will remain closed.

In Saudi Arabia, tens of thousands of mosques reopened Sunday for the first time in more than two months, but Islam´s holiest site in Mecca remained closed. In Jerusalem, throngs of worshippers waited outside the Al-Aqsa Mosque before it reopened. Many wore surgical masks and waited for temperature checks as they entered.

In Bogota, the capital of Colombia, authorities were locking down an area of nearly 1.5 million people as cases continued to rise. 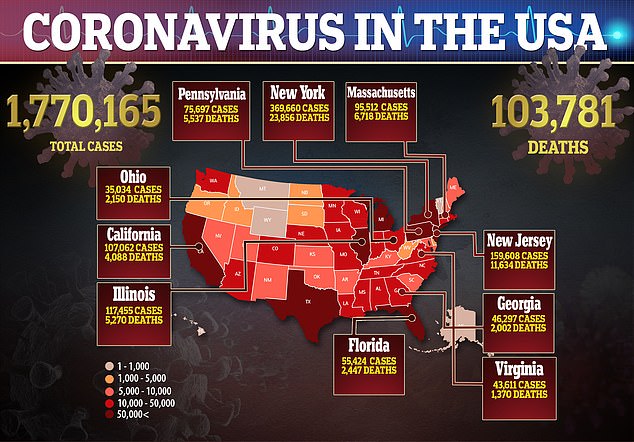 Bogota Mayor Claudia Lopez said no one in the working-class Kennedy area – inaugurated by late U.S. President John F. Kennedy in 1961 – will be allowed out, except to seek food or medical care or in case of an emergency. Factories that had been allowed to operate must close. The area has reported more nearly 2,500 infections and hospitals are reaching their limits.

Elite sporting events will be allowed to resume in England starting Monday, but without spectators, paving the way for the planned June 17 return of the Premier League, the world´s richest soccer competition.

But England´s deputy chief medical officer Jonathan Van-Tam warned that the situation remained precarious. Britain has seen nearly 38,500 deaths in the pandemic, the second-highest number of confirmed virus deaths after the United States.

‘I believe this is also a very dangerous moment,’ he said. ‘We have to get this right.’

During Mass in St. Peter´s Basilica to mark Pentecost Sunday, Francis noted a tendency to say that ‘nothing will return as before.’ That kind of thinking, Francis said, guarantees that ‘the one thing that certainly does not return is hope.’

CDC: WHAT IS SOCIAL DISTANCING?

Also called ‘physical distancing,’ according to the Centers for Disease Control (CDC) it means keeping space between yourself and other people outside of your home.

It’s recommended as COVID-19 cases can spread when an infected person coughs, sneezes, or talks, and droplets from their mouth or nose are launched into the air and land in the mouths or noses of people nearby. The droplets can also be inhaled into the lungs.

To practice social or physical distancing, the CDC recommends the following: