A pub landlord has jokingly renamed an ale ‘Substantial Meal’ in a cheeky bid to get around new Covid-19 restrictions.

Brett Mendoza, 40, who owns the Caxton Arms in Brighton, East Sussex, came up with the idea while discussing what constitutes a substantial meal with another landlord after the latest measures were announced last week.

An image of the spoof beer pump clip, which is from the ‘made up brewery’ and described as ‘hearty, filling and flavoursome’, was posted to social media last Wednesday, captioned: ‘Bring on Tier 2’.

It comes ahead of Brighton and Hove being placed under Tier 2 restrictions tomorrow, meaning diners in England are not allowed to linger or order more booze after their food is finished. 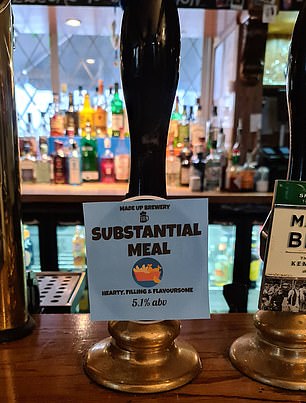 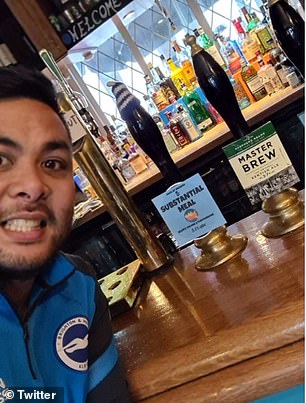 Brett Mendoza (right), 40, who owns the Caxton Arms in Brighton, came up with the idea (left) as a joke while discussing what constitutes a substantial meal with another landlord 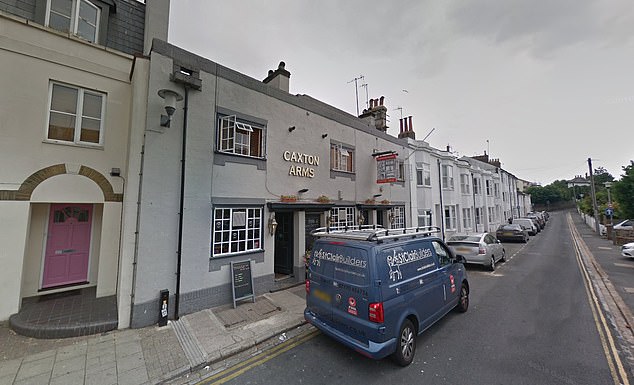 Brighton and Hove is being placed in Tier 2 tomorrow, meaning diners in England are not allowed to linger or order more booze after their food is finished (pictured: the Caxton Arms)

The post has garnered over 1,600 likes and more than 200 shares, with one social media user commenting: ‘Along with a bag of crisps and a pickled egg, substantial enough meal for anyone.’

Another simply tweeted: ‘Brilliant’, while a third added: ‘I love that’.

Speaking yesterday, Mr Mendoza told The Brighton Argus: ‘It’s a farcical situation. No one knows what a substantial meal is.

‘There are only a couple of days to go until the rule comes in now, and people still don’t know.’

The pub landlord added that he devised the beer as part of a joke and it is not a real brand, despite customers already attempting to order the booze.

Triple Point Brewing, a brewery and bar in Sheffield, South Yorkshire, is advertising 440ml cans of an IPA called ‘Substantial Meal’ however, with £1 per can being donated to Work for Good to help combat food poverty.

On its website, the beer’s description reads: ‘”Who needs a Substantial Meal?” Sad to say, we were moping around wishing more of our pub customers served substantial meals, so that we could sell more beer. 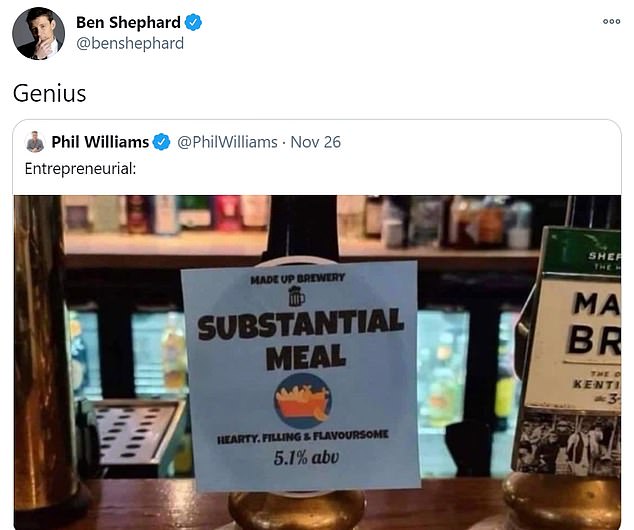 The post has garnered over 1,600 likes and more than 200 shares, with one social media user writing: ‘Along with a bag of crisps and a pickled egg, substantial enough meal for anyone’

‘Then it dawned on us that we actually have it pretty good and the people who really need a substantial meal are the children going hungry. So this new brew, our Substantial Meal IPA, is for them.

‘Not literally of course, it’s 4.6 per cent ABV! But for every can sold, £1 will go to combat food poverty via Work For Good.’

Landlords under Tier 2 restrictions will be expected to ask their customers to leave – or face hefty fines for breaching the Government’s Covid-19 legislation.

When asked how long drinkers can stay in the pub after purchasing food, the PM’s spokesman said last Friday: ‘We’ve been clear that, in Tier 2 I believe, that you need to have a substantial meal if ordering any alcohol and it remains the case that the guidance says that once the meal is finished, it is at that point.’ 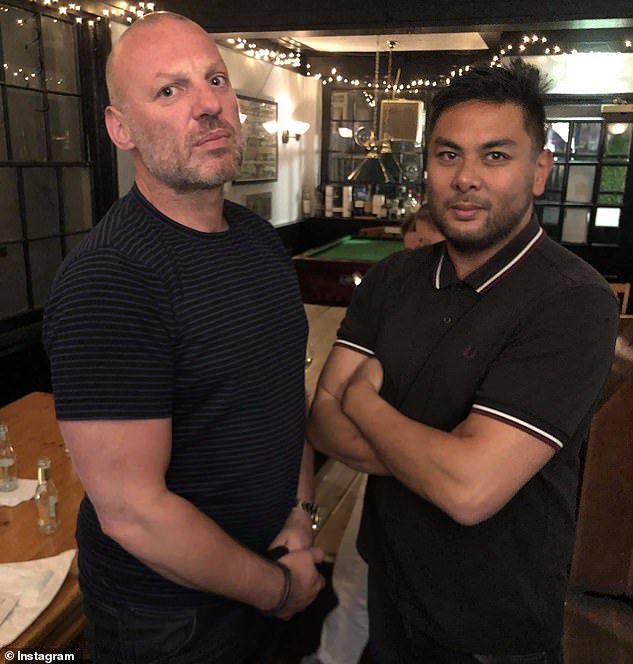 The pub landlord (right) said he devised the beer name as part of a joke and it is not a real brand, despite customers already attempting to order the booze

Fancy a pint? You’ll have to buy a meal (not just crisps)

Pubs can remain open in areas under the most stringent rules – but only if they serve customers meals with their drinks.

Those that just sell alcohol must close under ‘tier three’, the toughest new measures.

Diners will be required to eat ‘substantial meals’ rather than crisps, nuts or other bar snacks.

Social mixing will be banned both indoors and in private gardens, so people cannot go out with anyone outside their household.

Both the police and the council will be responsible for enforcing the ‘substantial meal’ rules.

Toby Perkins, Labour MP for Chesterfield, said: ‘It’s not entirely clear if you had a sausage roll with a bowl of chips, would that be substantial? I’m not clear on that.’

Housing Secretary Robert Jenrick suggested that only a pasty that came with a side and was served to a table in a pub could be considered as ‘a normal meal’.

Tier 2 pubs can only serve alcohol if bought with a ‘substantial meal’, leaving drink-led pubs weighing up whether it was even commercially viable to trade.

Pubs are launching so-called ‘Boris menus’ of cheap tapas-style plates of food that drinkers can order through the day so they can enjoy a drink with family or friends after December 2.

A substantial meal is defined by the Government as a ‘full breakfast, main lunchtime or evening meal’ – with Communities Secretary Robert Jenrick claiming a pasty on its own doesn’t count, but when served with chips and salad it does.

Boris Johnson imposed Tier 2 and 3 rules on 99 per cent of England on Thursday, the higher category bans all hospitality business, while the other permits pubs to stay open only if they serve food and household can only mix outside with a substantial meal.

All restaurants and bars in Tier 3 can now rely on is through takeaway orders.

More than 50 pubs and breweries including Greene King, Heineken and Budweiser pleaded with the Government to extend support to avoid thousands of local venues going bust.

In a letter to the Chancellor Rishi Sunak they said: ‘It would be nothing less than heart-breaking if, having survived through the last nine months, pubs now face ruin with the end of the pandemic in sight.

‘The support the Government has given us up to this point would all be for nothing, a colossal waste of resources. The looming disaster is avoidable, but only if you act now.’

Over 38,000 pubs, restaurants, bars and hotels in England will shut in Tier Three, apart from for takeaways, affecting 38,000 workers.

Around 120,000 venues, employing 1.5million people, will be put into Tier Two, with bosses warning that three-quarters of hospitality businesses under these restrictions will make a loss because household mixing is banned and they can only serve alcohol with a ‘substantial meal’.

A Government spokesperson previously said: ‘The length of exposure is one of the main factors in the spread of the virus which is why alcohol may only be served as part of a main table meal, and cannot be served once the meal is finished.

‘There is no prescribed limit for how long a meal is expected to take, however we expect people to act reasonably and exercise good judgement.’