London: Boris Johnson’s government has pressed ahead with a combination of bold political calculation and ancient protocol, to cement its plan to "prorogue" or suspend parliament for five crucial weeks ahead of Brexit.

However the tactic, which Johnson denied was designed to prevent MPs from blocking his Brexit plans, has provoked howls of outrage. 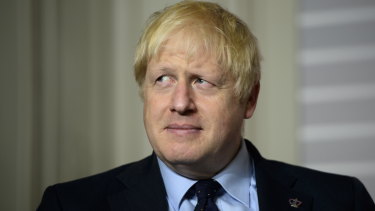 On Wednesday evening protesters gathered outside Downing Street and a petition to cancel the decision rocketed over three-quarters of a million signatures within hours.

One MP, Labour’s shadow treasury minister Clive Lewis, even vowed that “police will have to remove us from the chamber” when it was suspended.

“We will call on people to take to the streets [and] call an extraordinary session of Parliament,” he said on Twitter. 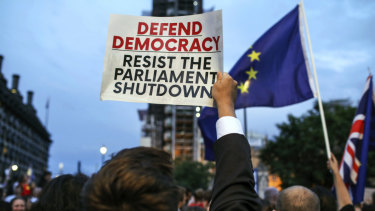 Anti-Brexit supporters take part in a protest in front of the Houses of Parliament in central London.Credit:AP

And activists have begun legal action to try to prevent it.

On Wednesday morning Johnson announced that parliament would be “prorogued” or suspended from Monday September 9 until October 14, the longest suspension of British legislature since the Second World War, in order to move on with his government’s “exciting agenda”.

A hastily convened “rebel alliance” of MPs from opposition parties, and some Tories, were reportedly plotting for an historic clash in parliament when parliament resumes, for a week, next week.

They hope to use the limited time left to them by Johnson to fast-track legislation to mandate yet another Brexit extension past the current October 31 deadline unless a withdrawal deal is struck by mid-October. 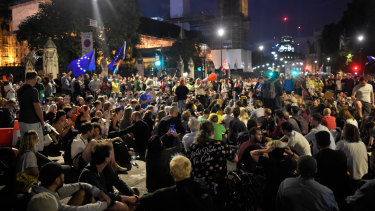 Pro-EU supporters protest outside the Houses of Parliament.Credit:Getty

But the prorogation is reported to be just the opening salvo in a series of proposals to stymie Brexit rebels. The government is said to have parliamentary mechanisms and tactics up its sleeve to eat up the remaining time available for MPs to take action against the government, such as filibustering legislation in the House of Lords or even advising the Queen not to assent to laws passed by parliament.

One senior Brexiteer told Buzzfeed their strategy was the equivalent of a soccer team, one goal ahead, playing down the clock by "holding the ball by the corner flag".

Former Chancellor of the Exchequer Philip Hammond and Speaker of the House of Commons John Bercow both called the prorogation plan a “constitutional outrage”. The European Parliament’s Brexit co-ordinator, Guy Verhofstadt, said “taking back control has never looked so sinister”.

And it emerged that Scottish Conservative leader Ruth Davidson was on the verge of quitting for “personal and political reasons”. Though sources denied it was a direct result of the day’s events, she has been in vocal conflict with Johnson over his willingness to embrace the risk of a no-deal Brexit. 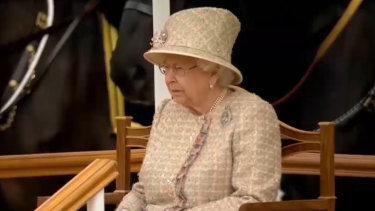 Can change her mind at any time: Queen Elizabeth.Credit:ninevms

A snap poll by YouGov found only 27 per cent of those surveyed thought Johnson’s plan was acceptable, while 47 per cent were opposed and a further 26 per cent didn’t know.

Even among Conservative and Leave voters the strategy had barely 50  per cent support.

But the government pressed ahead, claiming it was a necessary procedure to get new legislation before the Commons. Prorogation usually precedes a new parliamentary session, and new governments use it to clear the decks of bills and motions to start afresh.

Within hours of announcing its intentions the government had its representatives at Balmoral in Scotland, where the Queen spends her summers, to get it in writing. 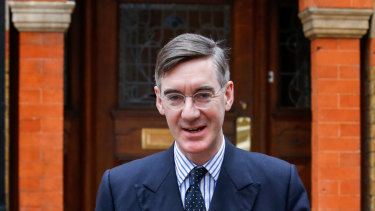 Jacob Rees-Mogg travelled to Scotland to speak to the Queen.Credit:Bloomberg

They advised the Queen, who was obliged by custom to sign the order. It is not known if she questioned them before signing – the procedures and exchanges of the Privy Council are secret, as counsellors take a solemn oath not to reveal “all matters committed and revealed unto you”.

The order was then published, revealing that the “Queen’s most excellent majesty in Council at the Court of Balmoral” had this day ordered that Parliament be prorogued at some point between September 9 and Thursday 12.

On October 14 Parliament “be then holden for the despatch of divers urgent and important affairs” – an ancient code for the traditional Queen’s speech that opens a new parliamentary session, sets out the government’s legislative plans and is then debated for several days.

By that time it will be just days before the Brexit deadline, with barely enough time to pass a Brexit deal let alone find an alternative.

The prorogation makes it more likely Labour leader Jeremy Corbyn will call next week for a vote of no confidence in the government, a potential election trigger. However if the government wants, it may have the power to delay the election to after brexit.

It emerged that on Tuesday, amid reports Johnson was planning a prorogation, Corbyn wrote to the Queen warning that “there is a danger that the royal prerogative is being set against the wishes of a majority of the House of Commons”, and requested a meeting along with other Privy Councillors “before any final decision is taken”.

The Queen may change her mind at any time until parliament is actually prorogued, though it becomes much more difficult to recall parliament after that point.

Corbyn called Johnson’s move a “smash and grab on our democracy”, while Scottish leader Nicola Sturgeon said it was “the day UK democracy died” with Johnson “acting like some kind of tinpot dictator”.

Activists have filed a legal bid in the courts to stop the suspension of parliament, with QC Jolyon Maugham calling Johnson’s move a “coup”.

“Never before has a prime minister suspended Parliament in an attempt to seek to thwart the Commons,” he said.

But the plan found support from the government’s allies, the northern Irish Democratic Unionist Party.

DUP leader Arlene Foster welcomed the end of the longest parliamentary session since the Union of England and Scotland in 1707, saying a new session would mean a new domestic legislative program to help schools and hospitals.

She also pointed out it meant a review of the confidence and supply agreement propping up Johnson’s minority government – suggesting Johnson may have to find some new incentives to keep them onside.