An RAF Hawk jet flying at 420mph had to veer away to dodge a head-on collision with a gyrocopter carrying two people, a report has shown.

The pilot of the Hawk T1 first saw the yellow gyrocopter from a distance of just over a mile while on a low level exercise at a height of just 300ft last September.

Its pilot rated the chances of a collision as ‘extremely high,’ after the incident above the Lake District.

But a report by the UK Airprox Board, which investigates near misses, said the jet generated forces of 4G as the pilot pulled off a ‘climbing break’ maneuver to avoid the collision. 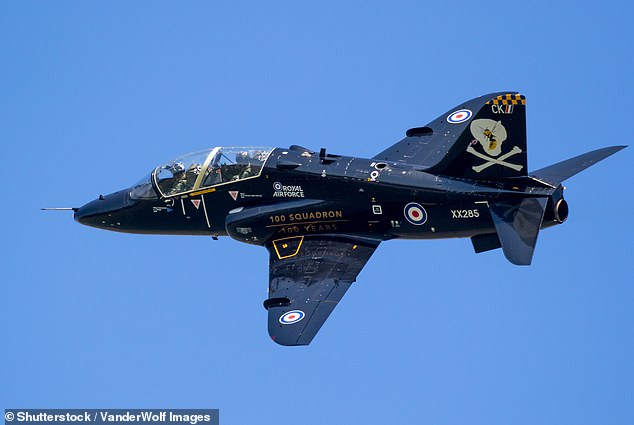 The pilot of the Hawk T1 said there was an ‘extremely high,’ chance of collision, but managed to avoid the gyrocopter in the near-miss last September. File image

The report said that the RAF pilot only saw the gyrocopter with seconds to spare due to a ‘blind spot’ in the terrain of the Ullswater valley near Penrith, Cumbria.

The jet came within 1,000ft of the German-made MT-03 gyrocopter which was flying at 80mph and the RAF pilot was able to see that it was carrying two people.

The report stated that there was a ‘proliferation’ of gyrocopters in the UK and there had been previous ‘similar occurrences’ of near misses in the same area. 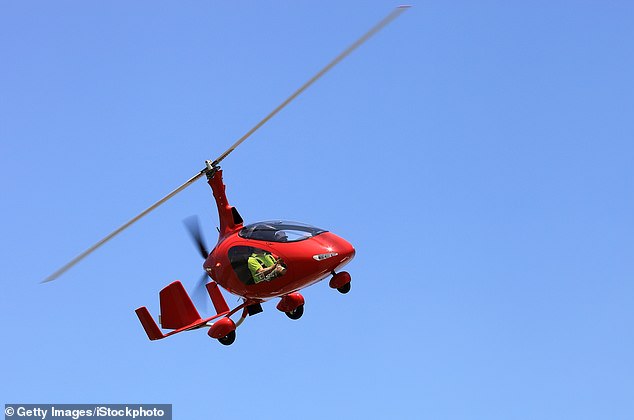 The gyrocopter was on a ‘pleasure flight,’ over the Lake District when it spotted an RAF Hawk jet flying directly towards them last September. File image

The gyrocopter pilot told investigators that they had been on ‘a pleasure flight’ when they suddenly saw the jet flying directly towards them before it took evasive action.

The report said that the two people on board were aware that RAF jets used the area for low level training and were being ‘vigilant’.

But it added that the speeds of both aircraft meant that any avoiding action by the gyrocopter would have been ineffective.

The report found that both the jet and gyrocopter showed an equal responsibility for collision avoidance as they were in a Class G area of airspace.

Investigators said that the Lake District area was commonly used for low level training by the RAF, although it did not take place as much as it once did.

RAF chiefs told investigators that there was a ‘fundamental’ need for its fast jet pilots to practice low level flying.

They said: ‘This occurrence is a classic example of a late pick up caused by a valley ‘blind spot’. 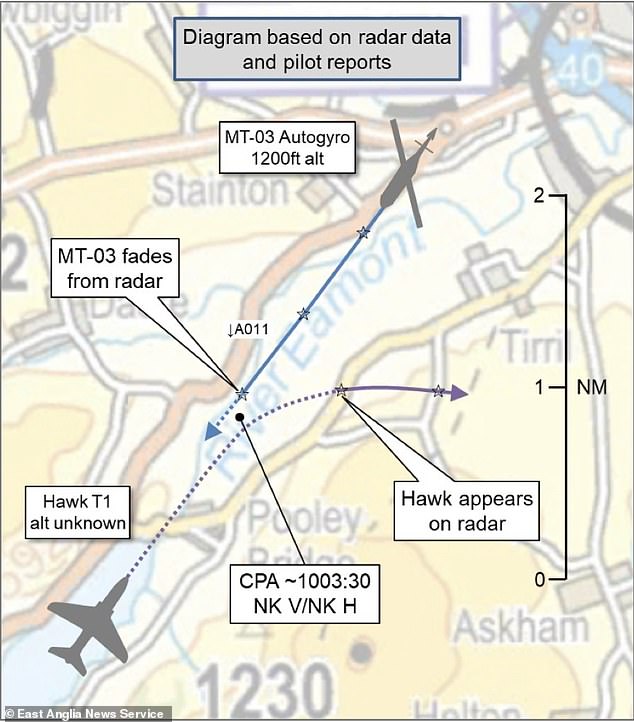 The jet was on a low-altitude flight when it spotted the gyrocopter emerging from a ‘blindspot’. It managed to take evasive action, but came within 1,000ft of the aircraft

‘Thankfully ‘see and avoid’ worked and the Hawk T1 crew was able to take timely and appropriate action, thus reducing the risk of collision.’

The British Rotorcraft Association agreed to post a warning to gyrocopter pilots to beware of low flying military jets if they ‘ventured’ into the Lake District.

The UKAB rated it as a Category A incident, saying safety had been reduced but the Hawk pilot had removed any risk of collision.

The report said that the Hawk had no collision warning system, but added that there was only a slim chance that it would have detected the gyrocopter earlier.

The jet had been one of two taking part in the exercise and had remained in the air after the second aircraft suffered a bird strike and returned to base.