Rallies held across Turkey for children and women in Syria jails 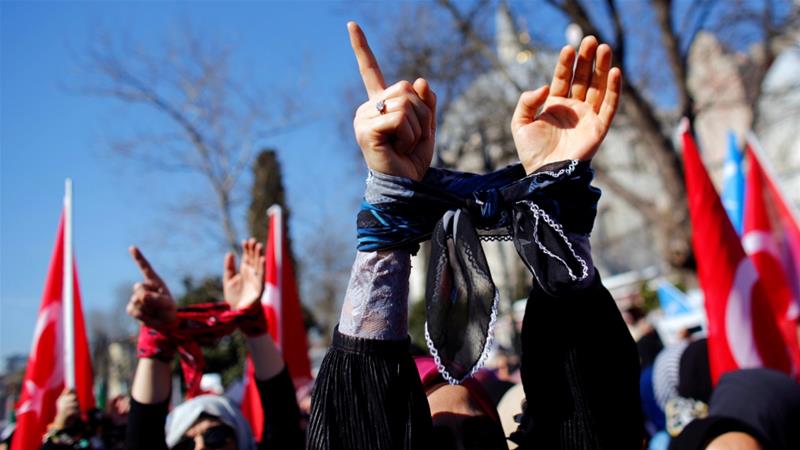 Rallies across Turkey have urged the international community to take immediate action for the release of women and children in Syrian prisons.

Friday’s events, organised on the occasion of International Women’s Day by several rights and humanitarian groups, protested human rights breaches and unjust imprisonment of women and children by the Syrian government.

During the demonstrations, held simultaneously in various countries around the world and Turkish cities, representatives of organising groups read out a joint statement titled: Together for the freedom of captive women and children in Syria.

According to the Conscience Movement, an umbrella group founded for the cause, more than 13,500 women have been jailed since the Syrian conflict began in 2011, and more than 7,000 women remain in detention where they are reportedly subjected to torture, rape and sexual violence.

Bulent Yildirim, head of the organiser group Humanitarian Relief Foundation (IHH), said at the press conference in Istanbul that Muslim countries should be “ashamed” of not doing enough for women and children held in Syrian prisons.

“We must not persecute anyone no matter what their language, religion or race is,” Yildirim said, adding that women and children in Syrian prisons live in terrible conditions.

Seymaros Baris, a member of Conscience Movement, said in eastern Bitlis province: “We will continue our struggle until the last woman and child in the Syrian dungeons are free.”

IHH’s Hatay province representative Ismail Dokmeci said from the province: “We are calling on the Syrian regime and its partners. Stop using rape as a weapon of war. Stop the brutal torture against women. Release our Syrian sisters.”

Group founded for the cause

The Conscience Movement was founded last year after an all-woman international convoy was organised to raise awareness about the abuses suffered by female prisoners of the Syrian regime.

Last year, a 55-bus convoy made a three-day journey from Istanbul to Turkey’s southern Hatay province near the Syrian border, where thousands of women staged a rally marking the International Women’s Day.

The Syrian civil war started as a largely peaceful uprising against the Syrian government in March 2011 but quickly developed into a full-scale conflict after the Syrian leader refused to concede power.

The former United Nations special envoy to Syria, Staffan de Mistura, estimated at least 400,000 people had died over the first five years of conflict. Hundreds of thousands of others have been displaced by the violence.