Record 1.85million patients in England are now waiting more than the standard 18 weeks for routine hospital treatment – and more than 50,000 people have waited for a YEAR already

More than 1.85million people had been waiting longer than 18 weeks for hospital treatment in England in June – the highest number since records began in 2007.

Data from NHS England shows the number of people waiting more than 52 weeks to start hospital treatment in England rose to 50,536, up from 1,089 in June last year, and the highest number for any calendar month since February 2009.

The number of patients admitted for routine treatment in hospitals in England was down 67 per cent in June compared to a year ago.

Doctors said the NHS is facing ‘worrying times’ in the wake of the worst of the pandemic and ‘performance remains poor’ in hospitals around the country. 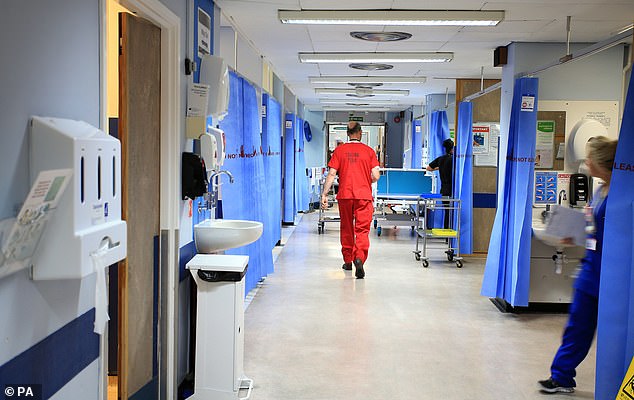 NHS hospitals are supposed to treat patients within 18 weeks of a doctor’s decision to give them a procedure, but a record number of people are now waiting longer than this (stock image of a hospital in England)

Dr Nick Scriven, of the Society for Acute Medicine which represents hospital doctors, said: ‘These are worrying times for the NHS given the threat of a second wave of Covid-19 in addition to all of the other pre-existing issues such as bed capacity, staffing, funding and social care provision.

‘Performance remains poor and concerning and, with what we know will be a challenging winter ahead, it will take more than a token cash injection announced by the Prime Minister this week to make up for years of neglect.

A&E departments are still much quieter than usual in the wake of the coronavirus outbreak, according to official data released today.

NHS England figures show there were 1.59million attendances to casualty units across the country in July – up slightly from 1.41m in June.

But attendances nose-dived during the height of the crisis, plummeting from around 2million before the pandemic to just 916,000 in March with people too scared to visit hospital out of fear they may catch Covid-19.

The NHS as a whole has not hit the 95 per cent target for almost five years – it last succeeded in July 2015.

Health chiefs have already said the four-hour target itself could be dropped.

‘A&E attendance remains much lower than last year yet even with the decreased numbers the four-hour target was not met, showing just how hard hit processes have been in this new era.

‘With four million people waiting to start treatment and 52 per cent waiting up to 18 weeks – far short of the 92 per cent standard – there is significant concern this combination will lead to many more people requiring more urgent treatment down the line when conditions have deteriorated.

This is the number of people referred to a cancer consultant by a GP for a first appointment.

A&E attendances at hospitals in England were down 30 per cent last month compared with a year ago, NHS England figures show.

NHS England, which published the figures, said ‘significantly lower’ attendances compared to the previous year was ‘likely to be a result of the Covid-19 response’.

It suggested that people are still staying away from A&E departments because of the coronavirus outbreak.

The 30 per cent year-on-year drop for July compares with a fall of 33 per cent recorded in June, 42 per cent in May and 57 per cent in April.

Only 93.7 per cent of patients in June were treated within a month of being told they needed drugs, surgery or radiotherapy.

It was down slightly on the figure of 93.9 per cent in May, which was the lowest since the monthly performance figures began in 2009.

Separate data showed only 12.9 per cent of patients diagnosed with cancer after a screening appointment got treated within the target time of two months.

Screening is mostly done on women and checks for breast, bowel and cervical cancer. The target is to treat 90 per cent of patients within two months if they are diagnosed.

For comparison, the rate was 85.8 per cent last June. It has dropped from the 47.9 per cent figure recorded in May.

This is the number of people referred to a cancer consultant by a GP for a first appointment.

Macmillan Cancer Support called for the backlog to be addressed to prevent cancer from becoming the forgotten ‘C’ in the coronavirus pandemic.

Sara Bainbridge, the charity’s head of policy and influence, said the delays could ‘directly impact on many of these people’s chances of survival’.