Religious leaders say they are pleased they can return to holding physical services but disappointed the state government didn’t allow a more more generous numbers of worshippers.

Rabbi Yaakov Glasman of St Kilda Hebrew Congregation, said he felt "some level of relief" after listening to Premier Daniel Andrews announce the easing of restrictions on Monday. 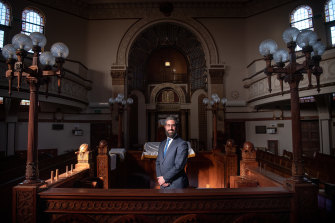 "But we still have some way to go before we get back to what I would consider as normal functioning for religious services and life cycle events," he said.

Rabbi Glasman, who is also president of the Rabbinical Association of Australasia, said had Premier Daniel Andrews announced a ratio of one person per four square metres, his synagogue could have safely held 100 people.

However Mr Andrews ruled that from 11.59pm on Tuesday, a maximum of 10 people plus a faith leader would be allowed at indoor services. Outdoors the maximum is 20 people plus a leader.

From 11.59pm on November 8, a maximum of 20 worshippers are allowed indoors and as many as 50 outdoors, plus a leader in each instance.

But he said the council hoped that if COVID-19 case numbers continue to be favourable, the government might allow more people inside houses of worship.

Rudy Nikkerud, a pastor at Planetshakers evangelical church in South Melbourne, said the state government hadn’t factored in worshippers’ mental, spiritual and emotional needs and should allow more of them to attend services.

Mr Nikkerud said the church’s emergency relief centre was feeding more than 3000 people a week in a COVID-safe way and so could safely accommodate larger numbers than were allowed under the new restrictions.

He said that before the pandemic more than 4000 people worshipped at South Melbourne every Sunday. But services had gone completely online for most of the past seven months.

Chris Appleby, vicar of St Hilary’s Anglican church which has centres in Kew, North Balywn and Mont Albert North said it would be difficult to have to screen out people to limit numbers.

Some churches were considering handing out tickets, he said, "but even then someone will turn out and doesn’t have a ticket and what do you say, ‘you can’t come to church’? Strictly’s JJ Chalmers opens up on battling painful leg infection but vows to continue dancing
We and our partners use cookies on this site to improve our service, perform analytics, personalize advertising, measure advertising performance, and remember website preferences.Ok