A record wave of COVID-19 hospitalisations forecast for December may not happen, with revised Burnet Institute modelling suggesting the state’s high vaccination rate could save hospital wards from an unprecedented influx of coronavirus patients.

But doctors say emergency departments are already at capacity and even a small surge next month would overwhelm a system suffering chronic staff shortages. 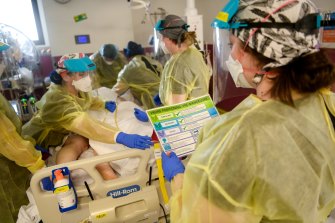 Nurses prepare to roll a patient in their bed as part of their COVID treatment process.Credit:Justin McManus

Burnet Institute deputy director Margaret Hellard has revealed to The Sunday Age that the institute’s latest, yet-to-be-released modelling paints a more “optimistic” scenario for the Christmas period, when a surge in COVID-19 hospitalisations had been expected.

“The high levels of vaccinations in the community means that we’re thinking it is likely that we’re on the more optimistic side of our projections than the pessimistic side,” Professor Hellard said.

“A well as the numbers staying stable, the impacts of high levels of vaccination within the community mean you’re less likely to have hospitalisation, with subsequent ICU admissions and deaths related to COVID.”

However, the modelling is based on the current Delta variant circulating in Victoria, and does not yet factor in the virulent new variant that has emerged in southern Africa.

Victoria recorded 1252 new cases and five deaths from the virus on Saturday. There are currently 299 people in hospital across Victoria with COVID-19, 22 of whom are on a ventilator. Of those in an intensive care unit, 42 still have an active case of the infection, while 48 have been cleared of the virus.

According to the original Burnet modelling, publicly released in mid-October, hospital admissions would dip after the October peak, before rising again, to roughly 970 to 1460 cases in December.

The institute’s modelling forecast more than 300 ICU admissions in almost 60 per cent of simulations modelled.

The modelling had a number of limitations that can influence the accuracy of real-life outcomes, including uncertainty about the impact of the weather on cases and the length of hospital stay of people with coronavirus.

Professor Hellard confirmed the Burnet modelling was being revised for the state government in light of the significant number of Victorians getting vaccinated, who are now highly immune to the disease due to the recency of their jab. More than 90 per cent of Victorians over the age of 16 are now vaccinated against coronavirus, a milestone the state reached on Thursday.

“That said, we will feel more confident when we recalibrate the models in coming weeks because we will have more data that will provide us more certainty about the road ahead.”

Professor Hellard would not be drawn on precise figures of her modelling, emphasising the predictions were still highly uncertain and should be treated with caution and do not factor in the new, virulent Omicron variant.

“The modelling that we will do for the government over the next couple of weeks will be predominantly Delta because that’s our reality at the moment. 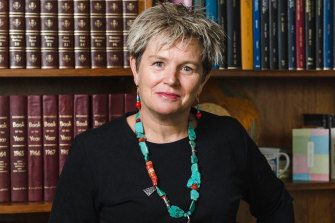 “But of course, in future modelling we will begin to say what is the impact of something like the Omicron virus.”

The World Health Organisation has classified the new strain that emerged in southern Africa as a variant “of concern”. The federal government on Saturday said it was preparing to tighten quarantine rules in response to the new variant.

The institute was asked to update its modelling for Victoria’s Health Department in early November to evaluate the impacts of different contact tracing scenarios. Health officials then presented the revised predictions to the state’s major hospitals in a series of briefings last week.

Senior hospital sources briefed on the latest modelling said they were told to expect a surge in hospitalisations and ICU admissions in late December to early January.

But the predicted spike would not be as severe as was previously expected, and may not even exceed the rush of cases in October.

The modelling has been updated since those briefings and will be provided to the state government within the next few weeks.

A number of health services, including the Austin, Royal Melbourne Hospital and Monash Health, have temporarily closed some of their COVID-19 wards to accommodate other patients, while the state government has announced that regional public and private hospitals could increase their elective surgery intake from Monday.

But doctors warn that even a small spike in admissions could cause big problems.

The Austin Hospital's intensive care director Stephen Warrillow said optimistic end-of-year modelling was “a bit reassuring … but even a slight worsening over that period will present real challenges”.

Dr Warrillow said many non-COVID patients being admitted to the ward were in very poor health after long delays to treatment and surgery.

“When people come in for surgery, their diabetes, their kidney function, all those things are not quite as good as you might expect under normal circumstances,” Dr Warrillow said.

Melbourne ICU doctor David Pilcher said the latest update he received suggested that there would be a resurgence, in late December and January, to numbers close to the COVID-19 ICU admissions seen in October (which peaked at around 200).

Hospital wards are still much busier than normal, as many very ill COVID-19 patients linger on life-support machines and emptied COVID wards are filled with other patients needing urgent care.

“The overall amount of work is not quite as heavy as it was during the peak, but it’s nowhere near normal. It’s above normal, and that’s without even resuming normal elective surgical admissions,” said Professor Pilcher.

Leading epidemiologists say Victoria is tracking ahead of expectations due to high vaccination rates but warn the state is still in a precarious position. 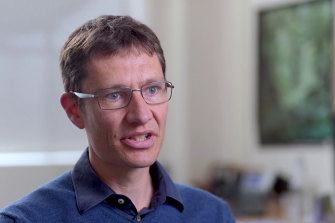 “We’re in a good position at the moment with I think, a really good chance that cases and more importantly, hospitals’ clinical loads will be better than some of the models imagined they might be.

“The reason is simply that we vaccinated more people than we thought would be possible, which is credit for Victorians.”

Deakin University’s chair of epidemiology Catherine Bennett said Victoria’s cases were plateauing and there was a good chance they would remain stable throughout December, but noted the state was unfortunately seeing the “end of the decline in cases”.

Melbourne University epidemiology professor Tony Blakely said he believed there was a “50/50” chance cases would rise between now and Christmas.

A sudden rise in cases within the next few weeks was possible and may even warrant a mild fortnight-long tightening of restrictions – such as mask wearing, density limits at restaurants and working from home – to reduce the impact of a major super-spreading event expected at Christmas, Professor Blakely said.

But it was “almost impossible” for Victoria to reach the previously forecast 1000 hospitalisations by mid-December, even if a major outbreak were to occur in coming days, Professor Blakely said.

A Health Department spokeswoman said it was “pleasing to see hospitalisations for COVID stabilise and begin to reduce – and we have taken the opportunity to cautiously increase elective surgery and provide some respite for our exhausted staff”.

“However, we are not out of the woods yet and modelling is only one part of the overall picture. It’s important people continue to get vaccinated and our health services remain on standby to flex up our response if needed.”