A 15-year-old boy has spent the night in custody and a large section of the Sydney Royal Easter Show will be closed on Tuesday after a fatal stabbing on Monday night.

Most rides will be closed at the show and refunds have been offered to patrons who booked prepaid tickets for the day, as police continue to investigate what ignited the brawl that led to the death of a 17-year-old boy.

A police spokesperson said officers were called to the carnival ride section of the Easter Show about 8pm to respond to reports of a fight.

A 15-year-old is continuing to be questioned by police on Tuesday morning. It is too early to say whether the boy will face charges, police said.

Royal Easter Show organisers released a statement on Tuesday morning and said patrons who had booked tickets for the day could get a refund. 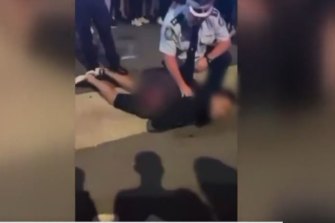 Police arrested one person at the scene of a fatal stabbing at the Royal Easter Show.

The adult ride carnival will be closed, meaning only a small number of children’s rides will be opened on Tuesday.

“Any ticket holders who no longer want to attend the show on Tuesday due to the closure of adult carnival will be able to use the ticket on another show day. If ticket holders cannot attend on the day, they can contact Ticketmaster to request a refund,” the statement read.

“The [Royal Agriculture Society] confirms all other aspects of the show will remain open on Tuesday.”

In a separate statement, the show organisers said they would be assisting police with their investigation.

“The RAS is shocked and saddened following the tragic loss of life on Monday night as a result of a fatal stabbing in the adult carnival, and our sympathies are extended to the family and loved ones of the deceased person,” the statement said.

“The RAS does not tolerate or condone any violence or antisocial behaviour and join with New South Wales Police in the wider community and condemning this appalling behaviour and unnecessarily loss of life.”

Footage of the incident was widely shared on social media and police are urging anyone who saw the incident, or has mobile phone vision, to contact Crime Stoppers.

A listener named Josh called 2GB radio on Tuesday morning and said his daughter was on a school excursion when the incident occurred.

“He says she called us saying someone’s just been stabbed. I think they are going to die. There is so much blood. A man with a knife ran through the show past my daughter. He even knocked over one of her schoolmates,” announcer Chris Smith said.