Police in Rio de Janeiro say a sniper has “neutralised” an armed man who took dozens of people hostage on a bus.

The man, who reportedly identified himself as a policeman, took 37 people hostage on a bus that was travelling across a busy bridge connecting the suburb of Sao Goncalo to central Rio on Tuesday morning.

Several hostages who were released during negotiations recalled how the man had poured petrol in the vehicle and had threatened to set it alight.

After a four-hour standoff and negotiation, in which police say the man made no specific demands, Brazil’s elite police force BOPE said its sniper had “neutralised” him.

It added that all the hostages were released unharmed. 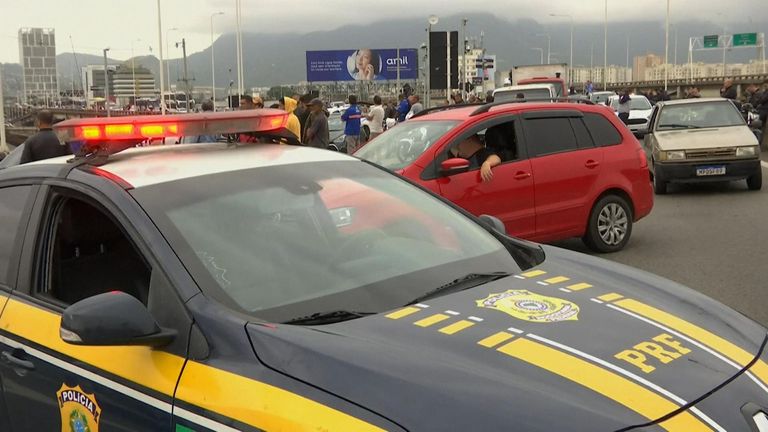 A spokesperson for the traffic police earlier told Brazil’s TV Globo that the man appeared to have “psychological problems”, while one of the hostages, Hans Moreno, later told the same broadcaster that the hijacker was “very calm” through the ordeal.

Footage posted to social media is said to show the moment the sniper shoots the hijacker.

In the video, a masked man is seen throwing an object as he steps off the bus. As he turns to get back on, he is seen to fall to his knees.

It is not clear if the man was killed.

In a tweet, Rio’s governor Wilson Witzel said he was watching the case “carefully”, assuring that his “absolute priority is hostage protection”. 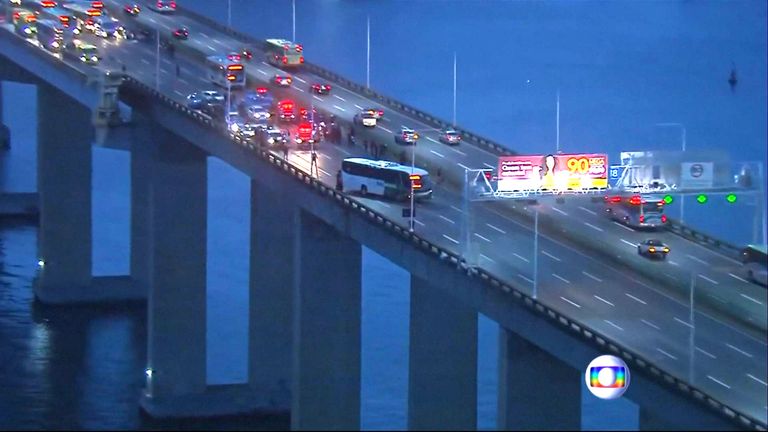 Meanwhile, the wife of one of the hostages told Good Morning Rio that her husband had texted her when the bus was being hijacked.

She said: “He left for work at 4.30am. When it was around 5.26am he texted me saying that the bus was being hijacked – ‘we’re going to the bridge’.

“At first I thought it was a robbery. I got up, woke up my son and said, ‘your father is being robbed’.”

Hundreds of vehicles were backed up on the bridge during the incident, with the road being forced to close in both directions.

Many people living in Sao Gonçalo cross the bridge each morning to commute to work in central Rio.