Washington: Michael Bloomberg's Democratic rivals have mauled the businessman in his first debate since entering the presidential race, branding him an "arrogant billionaire" with a disastrous record on policing, sexism in the workplace and financial transparency.

The latest presidential candidate debate, held in Las Vegas on Wednesday night (Thursday AEDT) was by far the liveliest and most aggressive of this election cycle.

"Look, I'll support whoever the Democratic nominee is, but understand this: Democrats take a huge risk if we just substitute one arrogant billionaire for another."

Former vice-president Joe Biden said: "The mayor says that he has a great record. The fact of the matter is, he has not managed his city very, very well when he was there. He didn't get a lot done.

"He has stop-and-frisk, throwing close to 5 million young black men up against a wall."

Former South Bend, Indiana, mayor Pete Buttigieg said Democrats risked losing the election if they nominated either Bloomberg or Bernie Sanders, describing the pair as "the two most polarising figures on this stage". 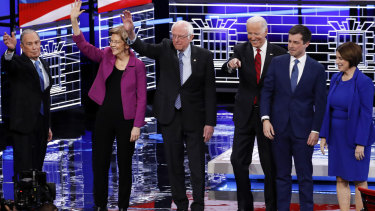 Bloomberg, who at times appeared flummoxed by the ferocity of the attacks, bluntly said that Sanders could not win the election because of his support for a government-run healthcare system and his identification as a socialist.

"You don’t start out saying I have 160 million people I’ll take away their insurance. That’s not how you build the coalition that the Sanders camp thinks they can do… If he’s the candidate we’ll have Donald Trump for another four years." 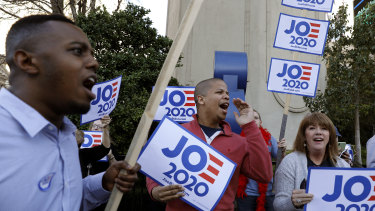 After criticising Bloomberg for not yet releasing his tax returns, several candidates also attacked Sanders, who suffered a heart attack last year, for not releasing his medical records.

Buttigieg and Minnesota Senator Amy Klobuchar clashed over a recent interview in which Klobuchar was unable to name the President of Mexico. 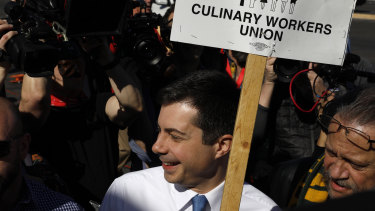 Pete Buttigieg walks in a picket line outside in Las Vegas. So many Democratic presidential candidates showed up at the picket line that it could have doubled as a presidential forum.Credit:Bloomberg

Klobuchar responded: "Are you saying I’m dumb? Are you mocking me here, Pete?"

She added: "I don’t think that that momentary forgetfulness actually reflects what I know about Mexico and how much I care about."