Robbery suspect, 30, held over rape of British woman, 48, in Goa

Robbery suspect, 30, is arrested over rape of British woman, 48, in the same Goa town where an Irish backpacker was sexually assaulted and killed last year

A robbery suspect has been been arrested over the rape of a British woman in the same Goa town where an Irish backpacker was sexually assaulted and killed last year.

The 48-year-old woman was attacked while she was walking towards tourist hotspot Palolem beach in the town of Canacona, southwestern India, at around 3am on Thursday.

She was forced into a paddy field, hit in the face and raped before her attacker stole her three bags as she walked towards Palolem beach from the town’s train station.

The attack comes 19 months after 28-year-old Irish backpacker Danielle McLaughlin’s mutilated body was found in the desolate area of Devbagh in the same town.

Police have arrested 30-year-old Ramachandrappa Chinna Yellappa, from the southern state of Tamil Nadu, who was already wanted for a robbery in northern Goa, according to the Times of India. 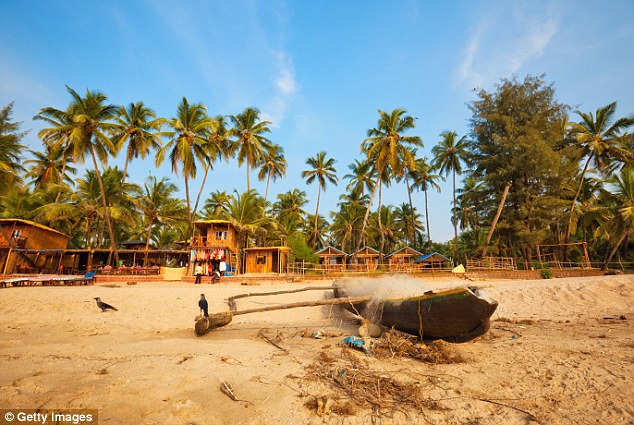 The 48-year-old British woman was attacked while walking towards Palolem beach (file picture) in the town of Canacona, southwestern India, at around 3am on Thursday, police said

He was detained after officers studied CCTV from the railway station and the scene of the rape.

The woman had left her guesthouse to catch a train from Canacona railway station to Thivim – but after it got delayed, she decided to make the one mile walk back to her accommodation alone.

On the way, and as she reached Palolem beach, the attacker forced her to a paddy field on the roadside and hit her in the eye before raping her and robbing her of three bags. The victim took shelter with a friend nearby before reporting the incident to the nearby police station.

Police inspector Prashal Desai said the British woman had been travelling in Goa for the last three weeks and she had been regularly visiting the state for the last ten years.

Mr Prashal Desai said: ‘She had gone to catch a train from Canacona to Thivim station located in North Goa district. ‘But, as the train got delayed, she decided to return to the place where she was staying near the Palolem beach.

‘She decided to walk back to the guest house which is one mile away from the station.

‘One the way, she was pushed by an unknown person into the bushes and was raped.

‘He first hit her in the eyes, due to which her vision blurred for a few minutes, and then raped her.

‘A search was launched to arrest the culprit and some suspects from the area have been rounded up. We are waiting for the medical report.’

She had been raped and brutally beaten with a rock and broken bottles before being dumped on the road during Holi, a prominent Hindu festival of colours.

Vikat Bhagat, a habitual offender whom Ms McLaughlin had befriended, was arrested in the case and charged with her rape and murder, as well as theft and destruction of evidence, after allegedly confessing to the crime.

The trial is ongoing and it is expected to be years before a final judgement is made.