From penniless ‘Del-ski Boy’ orphan flogging dolls in Siberia to Putin’s ‘money man’: BBC reveals EXACTLY how Abramovich made his fortune in Panorama probe exposing murky Krelmin connections – and asks how it took so long to sanction him?

Roman Abramovich ‘stole billions’ from the Russian taxpayer and became Putin’s ‘money man’ in the West by benefitting from corrupt deals to buy two oil giants via bent auctions, Panorama has claimed.

As he was hit by more sanctions, the BBC last night laid out for the first time exactly how the Chelsea billionaire made his money, including allegations of blackmail, bribery and loan fraud to secure cut price purchases of oil giants Sibneft and Slavneft.

Andrew Mitchell QC, one of Britain’s top laundering, asset recovery, bribery and corruption barristers, told Panorama: ‘The material that I’ve seen shows that the creation of the Sibneft wealth in the hands of Abramovich is as the result of corruption’.

The 55-year-old, who has seven children from two marriages, boasts a fortune of £10.5billion or more built up in the aftermath of the fall of the Soviet Union.

He has a reported London property portfolio of at least 70 houses, mansions and penthouses worth £500million, along with fleets of cars, private jets and yacht worth over £1billion. Most of these are now subject to sanctions.

He has also been questioned over his links to the Russian president, repeatedly denying in and out of court that he is Putin’s ‘cashier’ in the West.

The businessman, 55, was born a penniless orphan in Saratov, south west Russia. He was instead raised by his grandparents in Komi, Siberia, from the age of four. He started off flogging plastic dolls on a market stall, but has been accused of using ruthless determination to become one of the richest men in the world before he was 40 after buying up state assets.

The oligarch was arrested in 1992, aged 25, having allegedly used false documents to get 55 tankers of diesel, before the charges were dropped. Within three years he did the deal to buy Sibneft, allegedly using a $137million loan set up by the Kremlin so he could get the oil firm for $250million. The path to his incredible wealth was smoothed by an alliance with the oligarch Boris Berezovsky, who opened doors in the 1990s thanks to his close relationship with President Boris Yeltsin. In 2005 it was sold back to the Kremlin for $13billion.

There are also claims that in 2002 – after Putin came to power – he bought Slavneft in another rigged auction, according to Panorama, after a rival Chinese bidder was forced to withdraw when their negotiator was kidnapped.

These are the main bombshell allegations made by the BBC last night, after being leaked a dossier from security sources: 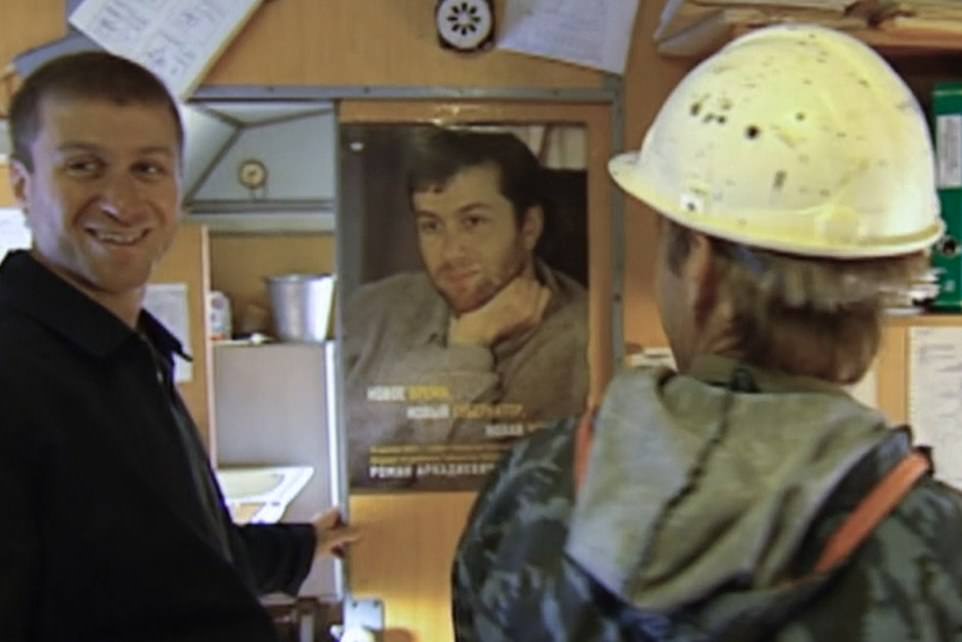 A smiling Roman Abramovich, once a penniless orphan and now a billionaire, in his office believed to be after he bought Sibneft in 1995 in a deal the BBC claims was corrupt 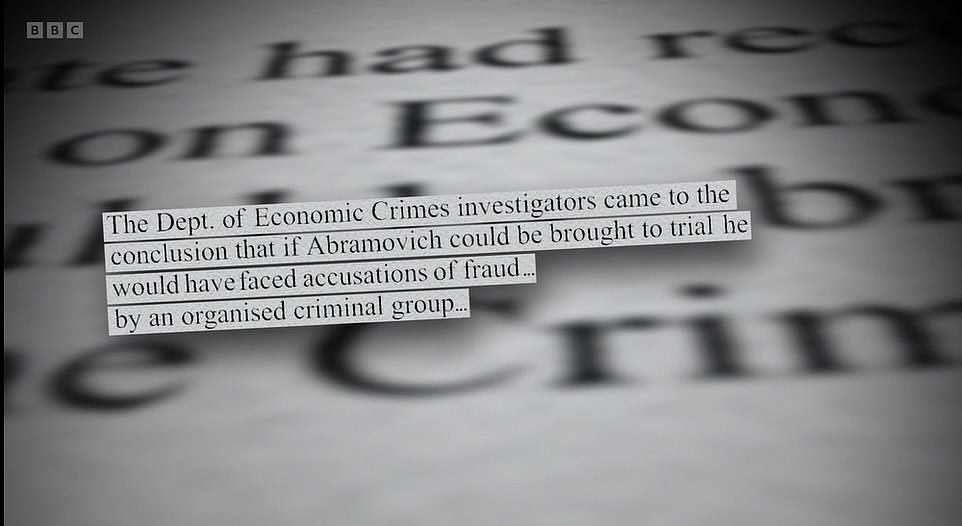 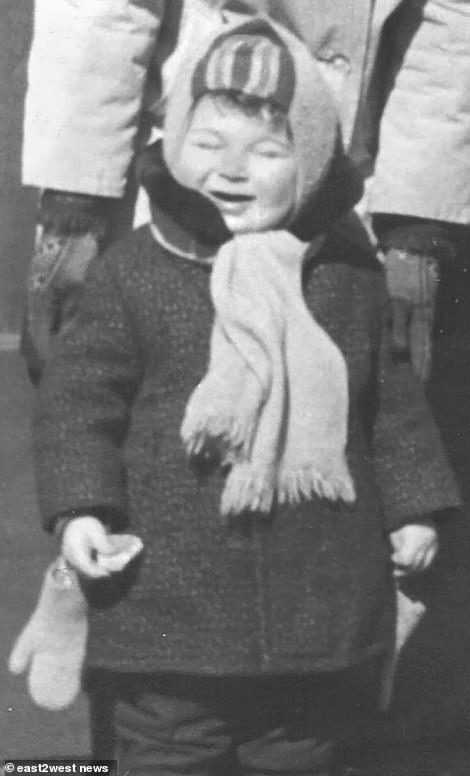 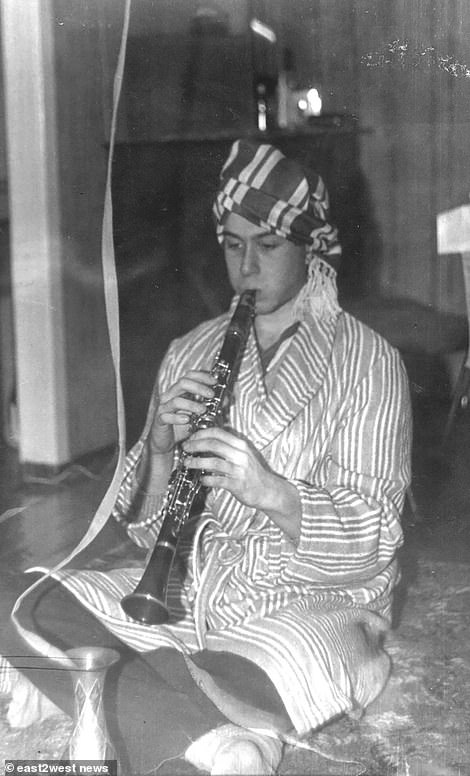 His parents died when he was young, and Roman (left and right) was instead raised by his grandparents in Komi, Siberia, from the age of four. Both his grandparents Vasily and Faina, were from Ukraine and fled during the war 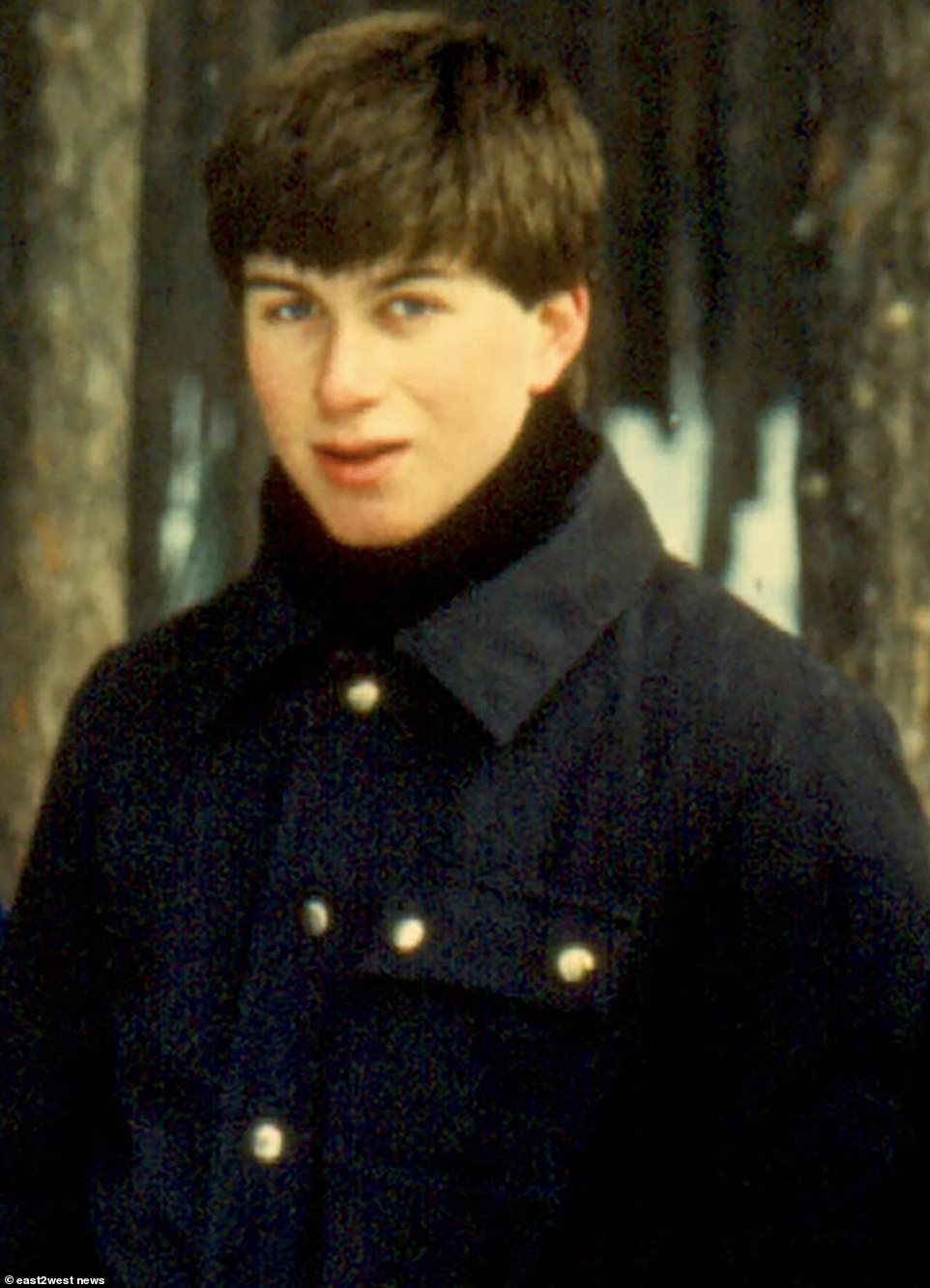 Roman Abramovich as a teenager in Ukhta, Russia 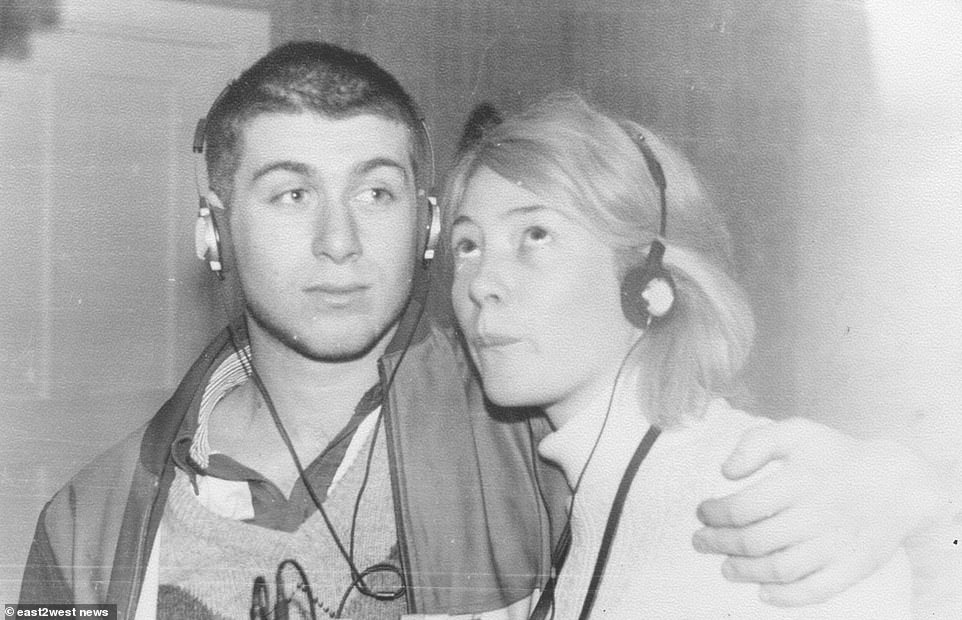 Roman Abramovich with his first girlfriend Viktoria. At that time he was selling items like dolls on his local market 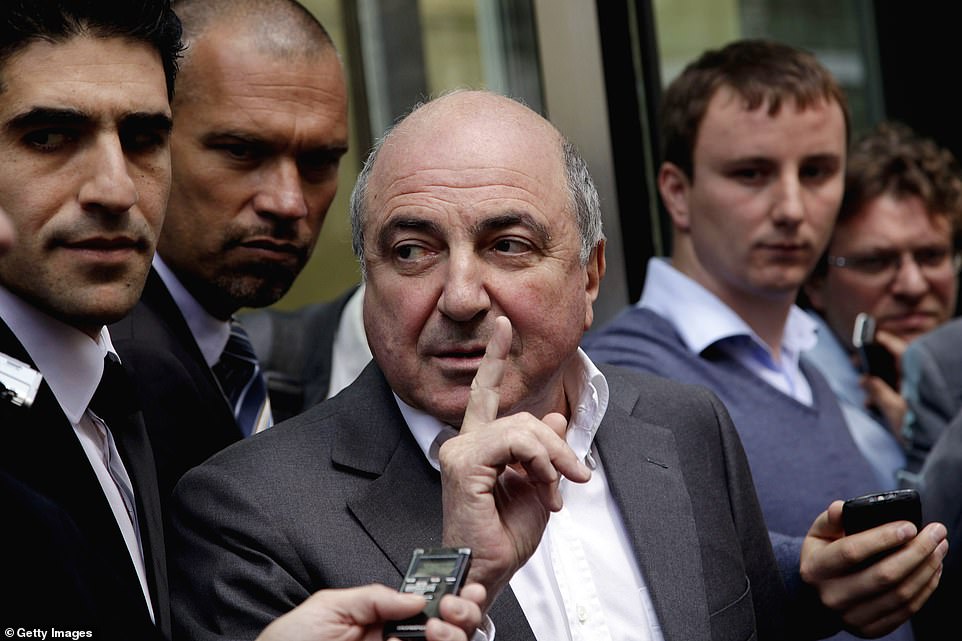 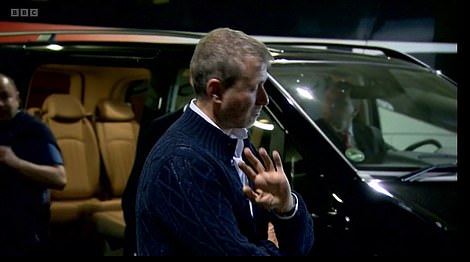 Mr Abramovich was accused of stealing a train carrying diesel. His lawyers say it was a ‘misunderstanding’

When Roman Abramovich was 25, the document leaked to the BBC alleged that the deputy city prosecutor of Moscow ‘authorised the imprisonment of Abramovich under Article 90 of the criminal procedure code’.

Police were investigating the theft of a trainload of diesel, with Abramovich the main suspect. The train was stopped, allegedly by the oligarch himself, and then diverted to Latvia on the Baltic coast.

The document states: ‘Abramovich personally met the shipment and using forged documents had it rerouted to Riga where the diesel oil was sold’.

Abramovich was arrested but never charged and his lawyers claim it was ‘all a misunderstanding and the matter was resolved’.

But the document suggests Abramovich was detained in police custody – a claim the oligarch’s lawyers did not deny when approached by the BBC. 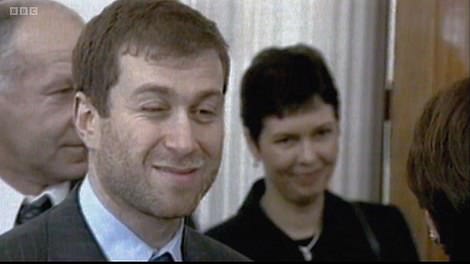 Experts told the BBC that three years later Abramovich, then an oil trader with ‘no political influence’, did the deal that would make him a billionaire.

The path to his incredible wealth was smoothed by an alliance with the oligarch Boris Berezovsky, who opened doors in the 1990s thanks to his close relationship with President Boris Yeltsin.

BBC Panorama said it had been passed a document showing the Russian authorities wanted to charge Mr Abramovich with fraud. The leaked file, held by Russian law enforcement, claimed the government was cheated out of £2billion in a major oil deal.

It said: ‘The Dept. of Economic Crimes investigators came to the conclusion that if Abramovich could be brought to trial he would have faced accusations of fraud… by an organised criminal group.’ 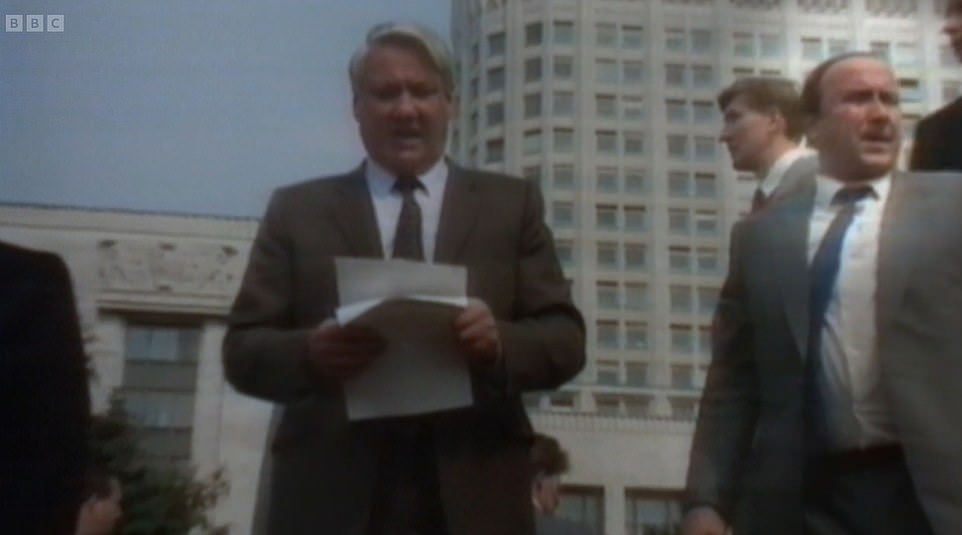 Berezovsky is alleged to have told the now Chelsea owner to hand $10million (£7.7m) to Yeltsin’s bodyguard and confidant Alexander Korzhakov (highlighted right of picture) to get the deal over the line

The BBC claims that its dossier alleged that a minister personally authorised taxpayers’ money amounting to $137million be put into the account of a Russian bank that would later lend Abramovich the money to do the Sibneft deal.

Mr Abramovich paid around $250m (£190m) for the oil company before selling it back to the Russian government for $13billion in 2005, the BBC reported. 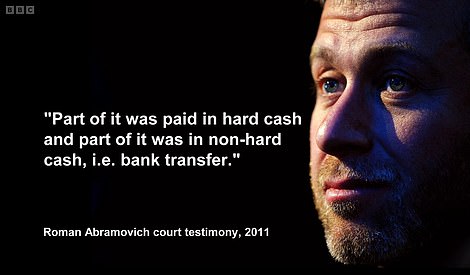 Yuri Skuratov, the Russian former chief prosecutor, who investigated the deal, said: ‘Basically, it was a fraudulent scheme where those who took part in the privatisation formed one criminal group that allowed Abramovich and [Boris] Berezovsky to trick the government and not pay the money that this company was really worth.’

Berezovsky, a fellow oligarch who later fell out with Abramovich and Putin and was later found dead in his UK mansion, is alleged to have told the now Chelsea owner to hand $10million (£7.7m) to Yeltsin’s bodyguard and confidant Alexander Korzhakov to get the deal over the line.

Korzhakov told the BBC they did try to bribe him, claiming they were ‘worried’ he could ‘block’ access to Yeltsin. He denied getting the cash.

A High Court case involving Abramovich in 2011 and 2012 heard that Korzhakov did get the money in the form of ‘hard cash’ and ‘bank transfers’. The billionaire admitted he made corrupt payments to help get the Sibneft deal going.

He was being sued in London by his former business associate Berezovsky for $6billion, which Abramovich would win in 2012. In his own evidence to the court Abramovich said: ‘If I recall correctly, Mr Berezovsky demanded that payment be made’.

The court heard Abramovich made payments totalling several hundred million dollars to Berezovsky, often handing over bags of cash. He admitted paying Berezovsky $80m in 1996, $50m in 1997 and 1998, and $80m in 1999.

“Yes, he [Berezovsky] did call me and quite often. Of course, when he needed money he did call me,” Abramovich said.

Mr Abramovich’s lawyers told the BBC there was no basis for alleging he has amassed very substantial wealth through criminality. He has previously denied having close ties to Yeltsin or Putin. 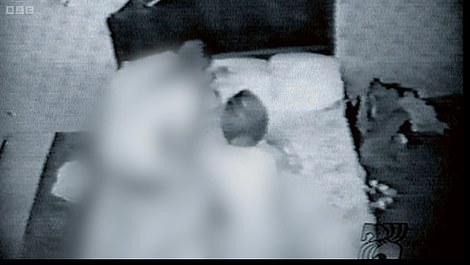 The BBC document, leaked to them by a security source, says that the Russian government was cheated out of $2.7billion in the Sibneft deal – a claim supported by a 1997 Russian parliamentary investigation. The document also says that the Russian authorities wanted to charge Roman Abramovich with fraud.

It reads: ‘The Dept. of Economic Crimes investigators came to the conclusion that if Abramovich could be brought to trial he would have faced accusations of fraud…..by an organised criminal group.’

Panorama tracked down Russia’s former chief prosecutor, who investigated the deal in the nineties. Yuri Skuratov didn’t know about the secret document, but he independently confirmed many of the details about the Sibneft sale.

The document also suggests Roman Abramovich was protected by former Russian President, Boris Yeltsin. It says law enforcement files on Mr Abramovich were moved to the Kremlin and that the criminal investigation by Yuri Skuratov was stopped by the President.

Yury Skuratov’s sacking coincided with the release of a sex tape in 1999 (pictured). He says it was a stitch-up to discredit him and his investigation.

He said: ‘This whole thing was obviously political, because in my investigations I came very close to the family of Boris Yeltsin, including via this investigation of the Sibneft privatisation.’ 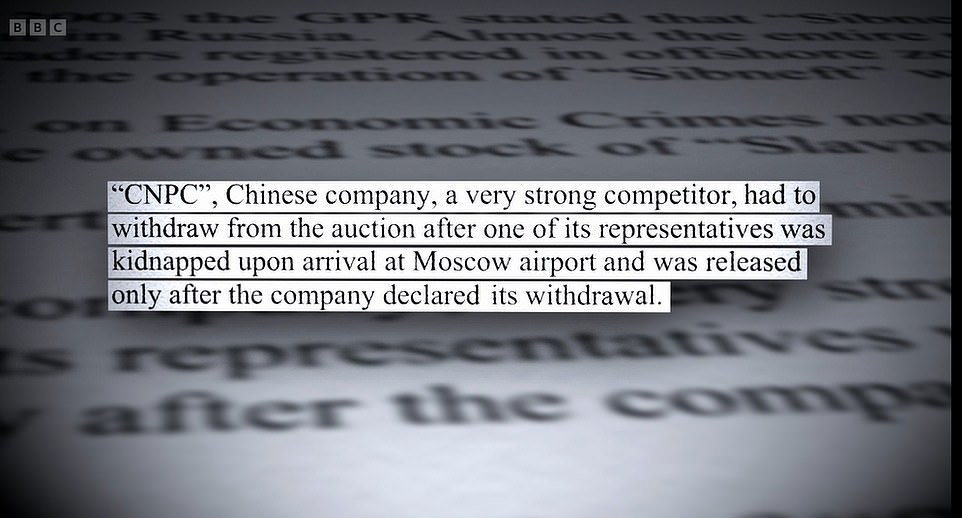 The BBC report claims a rival Chinese bidder had their negotiator kidnapped. Roman Abramovich denies any knowledge of it

Roman Abramovich then did a deal to buy oil giant Slavneft two years after Putin came to power as President, but the BBC claims this was also rigged.

The company was alleged to have been at the heart of a power struggle that saw its offices raided and suffering a bomb scare before the Kremlin put it up for auction. Abramovich would win after rivals dropped out.

Last night’s Panorama claims that there was a Chinese bidder willing to double whatever Abramovich was offering.

But the BBC dossier says that a member of the Chinese delegation was kidnapped when they arrived in Moscow for the auction, and kept captive until the Chinese pulled the deal and went home. 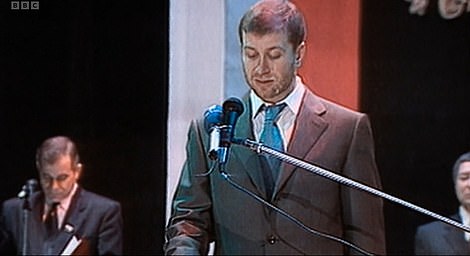 It said: ‘CNPC, Chinese company, a very strong competitor, had to withdraw from the auction after one of its representatives was kidnapped upon arrival at Moscow Airport and was released only after the company declared its withdrawal.’

Vladimir Milov was Russia’s deputy energy minister claimed that he told officials that the Kremlin must get the best possible deal for the company, in the top ten largest oil firms in Russia. He claims Abramovich ‘stole billions

He told the BBC: ‘I said, look, the Chinese want to come in and they want to pay a much bigger price. They say it doesn’t matter, shut up, none of your business. It’s already decided. Slavneft goes to Abramovich, the price is agreed. The Chinese will be dragged out somehow.’

There is no suggestion that Mr Abramovich knew anything about the kidnapping plot, or played any part in it, the BBC said. His lawyers also told the BBC the kidnap claim ‘is entirely unsubstantiated’ and he has ‘no knowledge of such incident’.

Whatever happened, Abramovich became the only bidder for the oil firm and won the auction. He would also serve for eight years as one of Putin’s regional governors (pictured). 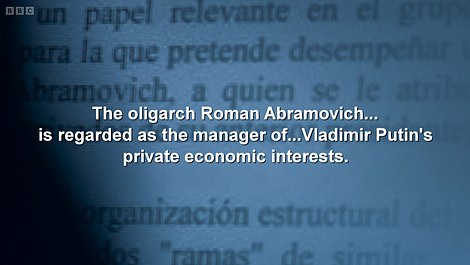 It described him as ‘Vladimir Putin’s money man’, according to the BBC.  It went on: ‘The oligarch Roman Abramovich is regarded as the manager of Vladimir Putin’s economic interests’ (right).

Earlier this year, Tory backbencher David Davis made the same claims in Parliament.

He described Abramovich as ‘the man who manages President Putin’s private economic affairs, according to the Spanish national intelligence committee’.

Vladimir Milov told the BBC: ‘I think that Abramovich might be sharing the wealth with Putin. Putin would never ever give away anything to anyone without having direct financial interests involved’.

Putin has long been accused of allowing oligarchs to flourish as long as he gets a cut of their cash – and they also look after his mansions and superyachts.

Abramovich’s lawyers again denied to the BBC that he has been protected by Yeltsin or Putin and denies being a ‘money man’ for Putin. 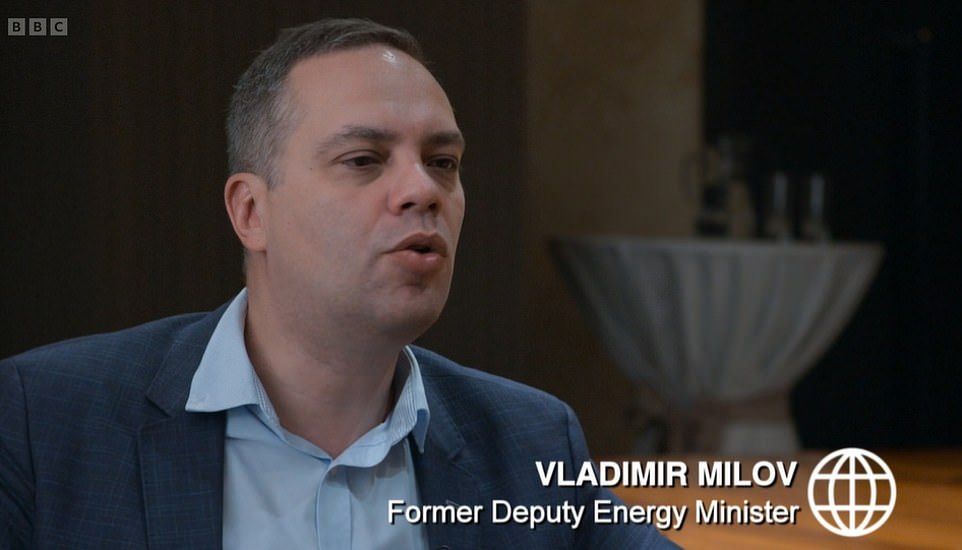 Vladimir Milov told the BBC: ‘I think that Abramovich might be sharing the wealth with Putin. Putin would never ever give away anything to anyone without having direct financial interests involved’